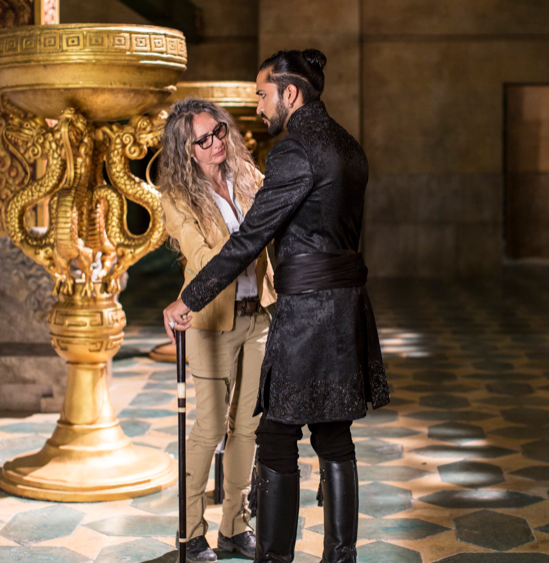 The Netflix original series “Marco Polo” is more than a reinterpretation of the Venetian merchant’s travels through Asia during the 13th century — it’s a look back at the dress found along the silk road during that era. The historical drama features a large collection of ornate bespoke costumes, all handmade by a team of freelance artisans under the watch of costume designer Jo Korer. WWD caught up with Korer to discuss the show after the release of its second season last month.

WWD: How did you alter your approach between season one and season two?

Jo Korer: Season one was very much typical of a new show — everybody was finding their feet. We kind of stuck to more the historically correct look and that — to be honest — Mongolians wore robes. If it’s summer, it’s cotton robes, if it’s winter, it’s wool robes with fur and leather. I started to make noises around about halfway through filming season one that I felt [the look] should evolve. I felt, what was starting to happen was it was very obvious Marco Polo’s time with Kublai Khan was extending and developing…I felt a lot of the characters needed to move on. The biggest task for me was to keep [the costumes] fundamentally historically accurate, and not take it too far into the contemporary realm, but definitely stylize them more.

WWD: What kind of research went into making the show historically accurate?

Korer: For season one I was flown to Mongolia, and I worked with a historian. Of course, there was no photographic evidence of that time. It was very much down to the museums, the books — of which there are very few — and even less in English. It was very helpful to have at least a few books that had been written by historians in Mongolia. Also the museums and the paintings there.

It was very important to me to actually spend time in Mongolia and get a feeling of not only the clothes and what they would look like, but the wearability and access of certain fabrics or furs that would be around at the time. I tried to stick as much as I could to being historically correct. Any decoration I used on any of the costumes, whether it be for the jewelry or stones that were woven into or appliqued on the costumes, or with the dyes and the color we used, I tried to be sensitive and aware of what plants or what minerals were available in any of the particular areas we were trying to depict. It was greatly helped of course with the connection of the silk road, that connection from Mongolia straight through to Europe.

WWD: Where did you source the fabrics and beading used for the costumes?

Korer: Literally around the world. London, Venice, Rome, Florence, Istanbul, China, Mongolia, India, Thailand, Bangkok, Shanghai, some fabrics in Malaysia itself — worldwide. And I went to all of those countries to personally find them and purchase them. And same for all of the accessories, all of the gem stones. You have to, with a show like this, to find the authenticity you need. You have to travel, and you need to go to markets. A lot of the items I bought were antique from markets around the world. I found contemporary sources too contemporary. To define the more traditional antique feel to [the show], that’s what takes the time, to source that beautiful antique feel.

WWD: How long did it take to make each costume by hand?

Korer: When we’re making the more intricate designs of like Marco Polo’s jacket, they’re all hand-beaded with crystals and stones. It takes a long time, sometimes two to three weeks with three or four people working on it. What takes the time is actually the first [costume]. Once we’ve made one, we usually have to make another twp, sometimes even three — for the stunts people to wear or the actor to have a double.

How large is the show’s costume department?