Joel Schumacher, From Henri Bendel to Hollywood Director, Dies at 80

Schumacher worked as a fashion designer and visual display director at Henri Bendel before heading to Hollywood.

Joel Schumacher, whose multiple careers ranged from visual display director of Henri Bendel to Hollywood writer and director known for such films as “The Phantom of the Opera,” The Lost Boys,” “Batman Forever,” “The Client,” “St. Elmo’s Fire” and “Flatliners,” died Monday at the age of 80.

Born in Long Island City, Queens, N.Y., in 1939, Schumacher was the only child of Marian and Francis Schumacher. He graduated from Parsons School of Design, where he won numerous awards, including the Norman Norell Award for design excellence. He took a part-time job as a window display artist at Bendel’s and later was given total responsibility for the store’s visual planning.

Early on, Schumacher worked for Puritan Fashions and designed clothes for the Youthquake division. It was there he designed the “Love Dress,” which had a big red heart and put him on the fashion map.

WWD called him “something of a boy wonder” in 1966 when he was just starting out. At the time he was doing things for Paraphernalia and designing for Puritan’s Mam’selle line. “I believe in personality clothes…free and easy enough for the people in them to be fabulous…with great hair and pretty arms and legs,” Schumacher told WWD in 1966. “We’re living in a very physical culture where people are interested in things like exercise.”

He said there needed to be something imaginative about clothes, “not way out wild though because secure people don’t need wild clothes. But everyone wants to be part of the scene,” he told WWD during that interview while showing his first collection. 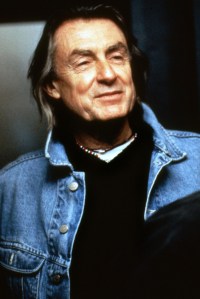 After Schumacher left Puritan, he joined Revlon “as a guiding light in design and styling.” His Frostling dress used in Revlon’s ads was such a hit that Charles Revson wanted to meet him, and  immediately hired him. “I see dresses, accessories and cosmetics working together to give the fabulous woman her total look,” said a 24-year-old Schumacher. He worked with Revlon’s Evan Picone and Royal Lynne labels. He was involved in not only design, but advertising, packaging and public relations.

But soon after, Schumacher slid into a life of drugs, sexual promiscuity and self-destruction.

“We had a four-year romance, drugs and me,” he told WWD in 1975. He was then hired by Halston, helping him organize his first dress collection, and later worked as an assistant to Carrie Donovan at Vogue. He later returned to Bendel’s, where he worked on the Street of Shops, turning them into fantasy shops.

Ralph Lauren, who became a good friend of Schumacher’s, spoke about him Monday. “I was a kid from the Bronx. Joel grew up in Queens. We both came to New York City with big dreams and that’s where we met in the late Sixties at Henri Bendel’s, the most innovative fashion boutique of its time.

“Before he moved to Los Angeles, and got involved in the movie business, becoming such a renowned director, Joel made movies by bringing stories to life in those fantastic windows on 57th Street. From the first time we met we shared an excitement and curiosity about life. Joel was incredibly charismatic, creative and always had a fresh point of view about everything. When I first started out, he very often led a cheering squad on the front row of my fashion shows seated next to Candice Bergen, Diane Keaton and Woody Allen. Throughout all  the years, we have kept in touch following our dreams on different coasts. Joel was one-of-a-kind — an innovator, storyteller, charming, stylish and a very generous friend. We thank him for sharing his movies — his dream came true,” said Lauren.

“Everyone knew Joel,” said Norma Kamali. “He was kind and fun, low key and generous. I  loved that he asked me to do costumes for ‘The Wiz.'” She designed the Emerald City costumes, while the film’s costume designer Tony Walton designed the main costumes for Michael Jackson and Diana Ross.

When Schumacher decided to leave the New York fashion scene, he first got into TV commercials through his friend, Howard Rosenman, and moved to Hollywood. (Schumacher  later earned a Master of Fine Arts from University of California Los Angeles).

In a WWD interview in 1975, Schumacher recalled how his love affair with movies materialized. “In a poor neighborhood like mine, the biggest event was going to the movies. That’s where Fred Astaire was and he was my idol — the way he dressed, everything about him. As soon as I realized there was another world out there, where Fred Astaire wore double-breasted blazers, patent leather shoes and danced on black floors, it was then that I knew…”

He got his first chance in films designing clothes. His first credit was 1972 in “Play It as It Lays,” and that was followed by such movies as “Blume in Love” and “Sleeper.” At the same time, he began writing scripts and within a year and a half, he wrote nine scripts and sold six. His early scripts were “Sparkle,” “Car Wash,” “Genius” and “Damaged Goods.”

He told WWD in 1975, “I wrote out of my experience and love of people. Love is the message and you have to give it all. Hollywood has always sent out that message. It takes lot of love to make a movie. Whether it’s good or not is beside the point. That’s one of the things you buy for your $3 ticket.”

Years later, in a WWD interview in 1990 when he was making the screen version of “The Phantom of the Opera,” he said he would rather his work show than tell his audience a story. “I’m trying to say a lot of things in my work, without really saying them. Unless you are David Mamet — I mean somebody with a true gifted voice — as a filmmaker you should keep your mouth shut. You should let the audience walk out of the theater and have something to discuss when they go for their margaritas or expressos.”

At the time, Schumacher felt that “Phantom” was a big step for him. “Who wants a job where you think you can phone it in?” he told WWD in 1990. “Sure it’s scary and I may fall down, but that’s the fun part of it. It would be very boring to me if I thought, Oh! ‘Phantom’ got that one licked. Why would I even want to do it?”