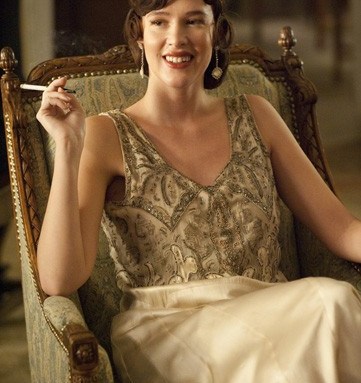 “Boardwalk Empire,” premiering on HBO Sunday, is set in Atlantic City at the dawn of Prohibition when gangsters controlled the city and their girlfriends dressed like starlets.

“Atlantic City was a place where people came to reinvent themselves,” the Emmy-award winning costume designer Dunn says of the years post-WWI, when people played at the city’s hotels and nightclubs. “Everybody was on the make or out to have a good time. It was like Las Vegas.”

Dunn did his research at FIT, the library at the Metropolitan Museum of Art and the Brooklyn Museum, reading biographies and consulting catalogues from the period. His top sources for authentic clothing were New York Vintage and Early Halloween in Manhattan.

“The difficulty with the women’s clothing unfortunately, is that it was dry-rotting and not wearable,” he says. “We had scenes when an actresses’ dress disintegrated on the spot.” As a result, much of the period clothing had to be re-created. Men’s suits were made by Martin Greenfield, a Brooklyn tailor.

“Steve Buscemi [who plays mob boss Nucky Thompson] understood the importance of presenting an iconic look and presence,” Dunn says. “I decided to model [Nucky’s] style on the Prince of Wales [who later became Edward VIII and then the Duke of Windsor], who was like the David Beckham of the early Twenties.”

While several characters, including Al Capone and Lucky Luciano, are real people, Dunn had freedom to create their style because “when we meet them, we’re seeing them at an age we never saw them before,” he says. “Al Capone is 23. They’re baby mobsters.”

As Nucky’s paramour, Lucy Danziger, played by Paz de la Huerta, dresses for maximum effect. “She understands that her job is to look good,” says Dunn. “We pulled out the stops for her — she has furs and brocades and fabulous lingerie.”

The fashion in “Empire” is significant, Dunn says, because in 1920 “the corset had almost disappeared. Women had just started wearing bras and panties for the first time. It was when Chanel started designing. It was the birthplace of modern clothing.”