The collection was modeled by a broad spectrum of humanity — and the fashion crowd couldn't disguise its unease. 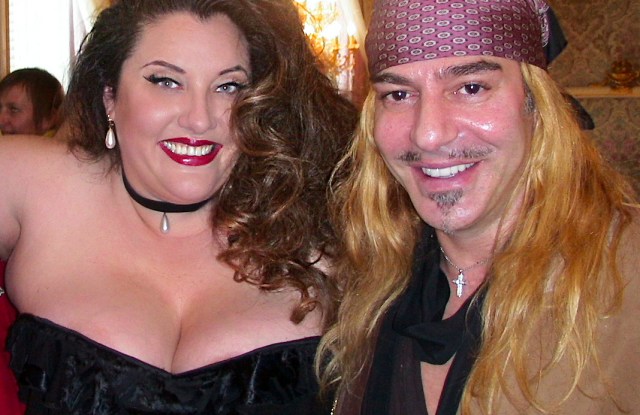 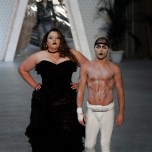 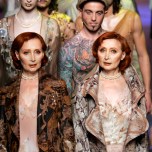 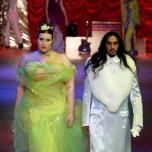 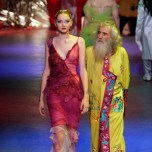 While in 2011 John Galliano would be disgraced, fired – and arrested – for anti-Semitic comments he made in a Paris bar, it was for a completely different reason that he stirred outcry with a show for his own label six years earlier.

Titled “Every Body Is Beautiful,” the John Galliano spring-summer 2006 collection was modeled by such a broad spectrum of humanity — pretty much all ages, sizes, colors and shapes — that the audience didn’t quite know what to make of it and could not disguise its unease. The show was widely panned.

“The result was Fellini-esque sans the obvious empathy,” WWD opined in its review of the show. “For those neither captivated by the spectacle nor moved by the message (at least a few in the crowd took offense), the whole thing was a flop.”

“The extremes of humanity were drawn together in a celebration of diversity. It was fashion taking on some of its worse biases: fat, old and ugly. And it was uncomfortable,” Robin Givhan wrote in The Washington Post, describing many people in the audience pointing and howling. “No matter if people laughed, knitted their brows in confusion or shifted uncomfortably in their seats, there was no wrong way to respond.”

“This was an enormously exhilarating show, and probably many people were unprepared (after Dior) for the gross humanity that filled his runway,” Cathy Horyn wrote in her review for The New York Times, also noting that some in the audience were laughing, and a French journalist next to her asked her what she thought of the “monsters” walking by.

Yet Horyn was one of the few to applaud the diversity on display. “The fashion world pays lip service to the notion of individuality, by putting white, blank-faced models on the runway. In Milan this season you rarely saw a black or Asian model. That is intolerable, not Mr. Galliano’s fat women and twins,” she wrote.

Participants in that show recognized what a breakthrough it was.

“The fact that Galliano chose me allowed me to feel in the place that I always wanted to be — that of representing the small woman in modeling,” said Stéphanie Lhorset, who wore a bridal gown for the finale look next to her dashing groom, Patrick Vigne. “It was a dream come true for me. …I loved the concept of being able to mix all people, that there are no boundaries between the different styles.”

Velvet d’Amour was exit No. 7, and she wore a black bustier gown.

“Given I was nearly 300 pounds, it did dawn on me that this was a subtle break from the norm,” she observed drily, noting that willowy, blonde Gemma Ward was among the runway queens of that era (and exit No. 29, manipulating a marionette of herself). “I admittedly hadn’t torn down any runways, beyond those that lived in my mind.”

The exposure prompted an invitation from Jean Paul Gaultier to appear in one of his shows, and also inspired d’Amour to launch her magazine, Volup2, devoted to diverse notions of beauty, with d’Amour taking all the photos herself.

She recalled sensing some stiffness in the audience as she sashayed, hands on hips, next to a topless trapeze artist, his toned torso covered in chalk.

“There were a few tight-lipped folks, squirming uncomfortably upon facing an accessible beauty aesthetic on the sacrosanct purity of the Paris runway. But for the most part, I felt a tremendous wave of vitality had just swept the cobwebs off of fashion’s doldrums thanks to John Galliano,” she said, also expressing her incredulity at the review of Suzy Menkes, then at the International Herald Tribune.

“I really had to laugh heartily at the ludicrousness of that — a showcase of the breadth of humanity is a freak show? O is for out of touch,” she offered.

Gérard Boucaron, a French actor who frequently plays Santa Claus in television commercials, was 60 years old at the time of the show. He was perhaps the stoutest, but not the oldest in the show.

He recalled with affection and great detail the perfectionism that went into every outfit and accessory, and the crystal-clear intention of the show. “What Galliano told me is basically I’m looking for a style of people such as you who are a bit different from others, to prove that we can also dress them in fashion,” he recalled.

“I was impressed by the idea when he proposed the concept to me in advance,” said Sidney Toledano, then chairman of John Galliano and chief executive officer of Dior (where Galliano was then couturier), drawing a parallel with the great Italian filmmakers of the Sixties and Seventies that also sought to show the beauty and strength of character of people who didn’t fit the Hollywood mold. “I was shocked that people were shocked by what he did.”

“It was very ahead of its time,” said photographer Nick Knight, who worked on multiple video projects around the show — and found it exhilarating. “At the time, there was such a narrow vision of what was acceptable beauty within fashion. There were no ethnically diverse models on the covers of Vogue magazine, no models over the age of 25, nobody above size 8.”

In Knight’s view, fashion designers including Lee Alexander McQueen have long been pioneers in championing diverse kinds of people.

(Of course, Galliano would forever taint his legacy with his anti-Semitic and racist outbursts six years later, which would see him fired from his own brand as well as Dior and lead to a conviction in a Paris court. https://wwd.com/fashion-news/designer-luxury/dior-ousts-galliano-in-wake-of-anti-semitic-allegations-3528611/The designer blamed overwork and addictions to alcohol and pills for his tirade, telling the court he could “hardly remember” his abuse of two customers at a bar in the Marais. After a period of rehabilitation and atonement, he sat on fashion’s sidelines before being hired as creative director of Maison Marigela in 2014.)

According to Knight, creatives in fashion value different forms of beauty, but the “people who make money out of fashion that don’t because they’re all totally terrified of making less money, which in itself is obscene.”

Jelka Music, then communications director at John Galliano, recalled “a silence that descended on the show audience as they really didn’t know what to make of it. The deeply humanist message was lost under the veneer of the ‘Freaks’ by Tod Browning inspiration, and when the press saw the wedding couple at the end, they lost it. Instead of being celebrated as an ode to inclusivity, it was panned as exploitation of difference to sell clothes.”

Music was referring to Browning’s 1932 horror movie about a trapeze artist and a group of carnival sideshow performers. Largely reviled upon its release and for decades after, the film was re-evaluated in the Sixties and viewed as a sympathetic rather than exploitative portrayal of the characters, with one influential critic calling it one of the most compassionate films ever made.

Sinéad Burke, director of Tilting the Lens, an accessibility and design consultancy, said she was not surprised by the reaction.

“Knowing that many people who held power within the fashion industry felt such representation was offensive provides a rationale for the exclusion, which so many who could be considered as different or ‘other’ often describe. Their discomfort gave permission for the status quo to remain,” she said. “I can imagine that a show titled ‘Every Body Is Beautiful’ was radical and confrontational in 2005.”

That said, she applauded a title that was a statement of fact, rather than a question.

“I like that perhaps for the first time, many of the people featured in the show might be giving consent to be looked at. The gaze is not inflammatory, but feels empowering,” she said. “Small glances between the pairings give confidence and reassurance to each other, to keep going.”

EDITOR’S NOTE: This story has been updated to address the fact of Galliano’s downfall in 2011 after a string of anti-Semitic statements and his firing from Dior and his namesake fashion house as a result.