Jones Apparel Group put the "For Sale" sign up in March and the company's chairman and chief executive officer, Peter Boneparth, is anxious. 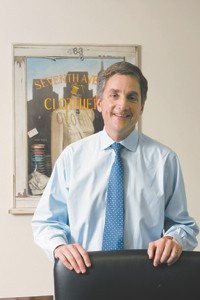 NEW YORK — Jones Apparel Group put the “For Sale” sign up in March and the company’s chairman and chief executive officer, Peter Boneparth, is anxious.

Sources said a deal for Jones is almost certain to happen before the end of summer. But they added that before that happens, Boneparth wants to pump up the value of the $5 billion company by adding a marquee brand name to its portfolio, which does the bulk of its business in the moderate and better markets under labels such as Jones New York, Nine West and Anne Klein. While Vera Wang’s name has come up as a possible acquisition for the company, a deal has yet to be signed.

For Wang, a deal with Jones could open her brand into new categories, such as sportswear. She already runs a $300 million company consisting of bridal and ready-to-wear and a slew of licensed products including sunglasses, fine jewelry, fragrance, stationery, china, crystal and mattresses.

Sources said Jones appears to be holding talks with at least two leading bidders. Bain Capital is said to be “seriously” interested in acquiring the company and has been in discussions with its management since the outset, while Apollo Management is understood to be another remaining bidder. Texas Pacific Group, which could be partnering with one of the private equity firms, remains a latecomer to the bidding and is viewed as being primarily interested in Barneys New York, the asset that many bankers and industry executives consider the crown jewel in the company’s portfolio.

Three second-round bids for the apparel giant were received around May 25 with the average bid in the $32-a-share range, according to sources. That is below what the company and its bankers are said to have wanted, which was between $35 and $38 a share.

So the question remains: Who will buy Jones? Besides Apollo and Bain, other companies said to have been interested were Apax Partners Inc., which bought Tommy Hilfiger, and Cerberus Capital Management LP, which owns Mervyns but has dropped out of the bidding for Jones.

Boneparth said at the time of the sale’s announcement that the process could end up being a long one, but in the end, Jones will settle with what works best for shareholder value. Nonetheless, Boneparth thinks his company is attractive to potential buyers.

“Our strategy has been really very simple, if you put it into some sort of formula,” he said in March. “If you have the best brands and you combine with the operational excellence, you maximize your operating cash flow, and that’s going to make you a long-term winner.”