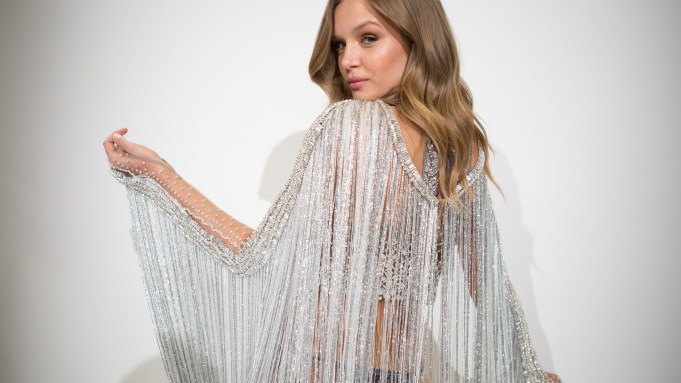 “This is a serious workout,” said Josephine Skriver, the newly minted Victoria’s Secret Angel, during a pre-show fitting on Tuesday morning in New York for the upcoming Victoria’s Secret Fashion Show, set to take place in Paris.

The 23-year-old Danish beauty — who has walked in the Victoria’s Secret Fashion Show three times, beginning in 2013 — will strut the runway in this year’s custom Swarovski look, worn in past seasons by Lily Donaldson and Martha Hunt. The sparkling silver outfit, made by an in-house design team, features 450,000 Swarovski crystals with sleeves weighing eight to 10 pounds each. “I’m just gonna wear this to the gym,” Skriver said, lifting her arms to mimic weights while showcasing 3,000 strands of dangling crystal fringe.

If that wasn’t enough sparkle, Skriver’s thigh-high boots, designed by Brian Atwood, boast an additional 1,630 crystals. (Swarovski has exclusively provided crystal embellishments for the show’s runway looks for the past 14 years.)

The annual spectacle, now in its 22nd year, will be taped on Nov. 30 at the Grand Palais and broadcast Dec. 5 on CBS at 10 p.m. with headlining performances by The Weeknd, Lady Gaga and Bruno Mars.

“The Grand Palais is an iconic, amazing building,” said Monica Mitro, the show’s executive producer, of the show’s move to Paris. “We went, we looked at it, surveyed the site…and it’s so incredible. It’s a fashion capital, and we’ve been changing and moving, and we felt like the logical next step was Paris, the City of Light. It’s so sexy…and everyone is so excited about it.”

Mitro confirmed that 52 girls will walk the show — the most in the show’s history — with 18 new faces, including the show’s first sister act, with Bella and Gigi Hadid both slated to make appearances.

“It got really tough at the end,” Mitro said of the casting process. “I’ve done this for 21 years now, and for the first time, I felt that there were so many good girls. It was hard to make that choice at the end. You see these beautiful personalities, skin, hair, bodies…they’ve all been working out so hard, and they’re so well-rehearsed and well-prepared for this moment. You can tell they’ve been getting ready for this particular casting. At one point, we had these cards [displayed on the wall] with all of their faces, and our casting director removed six of them. And it was so hard for me….It was like ripping off a band-aid. I wasn’t ready to remove any of the girls.”

The runway show will be divvied up into six sections — “The Road Ahead,” “Dark Angel,” “Secret Angel,” “Pink Nation,” “Mountain Romance” and “Bright Night Angel” — each with varying glitz, although “Pink Nation” will focus on more casual, ath-leisure style, featuring looks designed in collaboration with Nicopanda’s Nicola Formichetti.

“‘Bright Night Angel’ is all about the party girl,” Mitro said of the show’s finale section. “She’s out for the night in Paris, she’s at the clubs, she has her most expensive sparkly things on.” (That’s the segment in which Skriver’s look, naturally, will appear.)

At the fitting, Skriver was being primped and preened by Sophia Neophitou, the creative director of the Victoria’s Secret Fashion Show collection.

“I did ‘arm day’ [at the gym] yesterday, so I’m a little sore for this,” Skriver said. “I definitely amp up my workout [in advance of the show], but being an Angel, it’s year-round. I add on a lot of weights; I love building my shape. For me, it’s about getting strong and being able to walk out there feeling sexy.”

Skriver recalled the moment back in February when she found out she’d been crowned. “I’ve worked with the company for a few years. Getting the [Angel] title was the biggest dream of my life and I’d been working my way toward it,” she said. “It was so surreal getting that phone call. I was at a coffee shop in SoHo with my friends, and I just started screaming in the middle of the coffee shop. It was a cool moment….I think I celebrated for two weeks straight.”

Asked what she would tell her younger self before her first Victoria’s Secret Fashion Show — now, with a few years of experience under her belt — Skriver said: “Enjoy it. Take a breath. It goes so, so quick. It’s like Christmas Eve. You blink and it’s over. Take it all in and enjoy it. It’s the most fun day you’ve ever had.”