Judith Leiber will unveil its first collection of fine jewelry this week at the JCK jewelry show in Las Vegas, featuring precious metals and stones. 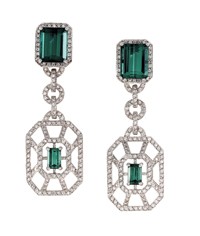 NEW YORK — Judith Leiber is used to outfitting customers with crystal-encrusted minaudières. Now the company is looking to provide them with the necklaces, pendants, earrings, bangles, rings and brooches to match.

The brand is unveiling its first collection of fine jewelry, featuring precious metals and stones, this week at the JCK jewelry show in Las Vegas.

The move is another step in the 43-year-old accessories brand’s journey to becoming a luxury lifestyle resource after the company was sold eight years ago by its namesake and founder, and taken over five years ago by private equity firm Pegasus Capital Advisors.

Under the creative direction of Frank Zambrelli since fall 2004, the New York brand has complemented its assortment of evening bags with other categories, including sunglasses, created under a license with Legacie; shoes; fine gloves; wraps, and gift items. Judith Leiber also recently unveiled a handbag collection designed in collaboration with stylist Rachel Zoe that will launch at retail this fall.

“Our essence has been about evening and special occasion for the last 43 years and, as we move forward, we want to expand on this world,” said Robert Vignola, president and chief executive officer of Judith Leiber. “As such, fine jewelry is such a natural fit. We believe women will be able to relate to it instantly.”

The fine jewelry, created under a license with DNW Inc., Los Angeles, is to bow in October in Judith Leiber’s four boutiques in New York on Madison Avenue; at the Lenox Square Mall in Atlanta; at the Forum Shops at Caesars in Las Vegas, and at the South Coast Plaza in Costa Mesa, Calif., as well as in fine jewelry stores and high-end department stores such as Neiman Marcus and Saks Fifth Avenue. Prices will range from $2,000 to $50,000, although limited-edition pieces and commissioned looks may climb to $1 million.

Zambrelli looked no further than the stones themselves for inspiration for the collection’s initial 15 core silhouettes, which will be interpreted in about 90 styles.

“We were inspired by something we work with every day, crystals and precious gems,” he said. “Lately, we’ve been working with the crystals in a new way, exaggerating their proportions and looking at them from all sides. So we looked at the precious stones in the same way, and it gave us the idea to design based on their facet structure, mimicking the shape of the stones.”

Judith Leiber is among the designer brands, including Chanel, Louis Vuitton, Gucci, Versace, Giorgio Armani and Bottega Veneta, that aim to exploit the growing market for fine jewelry. Sales of gold jewelry in the U.S. rose 4.4 percent — a six-year high — to $17.7 billion last year, according to figures compiled by GfK Audits & Surveys and released by the World Gold Council.

“It makes so much sense to me that well-known luxury brands would enter the fine-jewelry market,” said Roseanne Cumella, senior vice president of merchandising at the Doneger Group, a New York retail consultant. “We’re in a branded cycle, and there is that comfort level that no matter what avenue a brand takes, the integrity of the brand will carry over. As long as the product is true to the identification of the brand and is appealing to the same target customer, there is always room for hot brands.”

Vignola would not comment on sales projections for the new fine-jewelry collection, but did say he has big expectations.

“The caveat is that it’s a high-caliber item,” Vignola said. “If we build up the volume, it could become a meaningful part of the business. Our licensing partners also have extensive contacts around the world, which means we’ll be targeting the collection to retailers in places like Dubai, Shanghai and Moscow, as well as luxury fashion capitals.”

The brand is incorporating select pieces of the fine jewelry in its fall advertising campaign, which will again star Vanessa Getty, Vignola added. The brand also is exploring fragrance and other accessories categories.