Judith Leiber Thinking Outside the Box

Judith Leiber increasingly wants to be a house that can go from day to night. 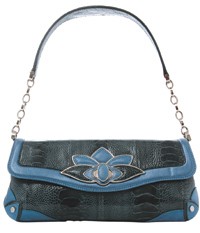 NEW YORK — Judith Leiber increasingly wants to be a house that can go from day to night.

The New York-based luxury brand is renowned for its jeweled evening minaudières that have been carried by every first lady since Mamie Eisenhower, sit in most museum costume collections and can take up to five days to complete, as some styles involve the hand application of 12,000 Austrian crystals to their surfaces.

But at the age of 42 — seven years after the company’s founder and namesake retired and five years after its takeover by private equity firm Pegasus Capital Advisors — Judith Leiber is firmly establishing a life beyond the minaudière.

The brand has brought on board Frank Zambrelli as creative director, who is now introducing his updated aesthetic with his third full Judith Leiber collection for spring that includes the evening bags, as well as such categories as sunglasses, codesigned under a license with Legacie; shoes; fine gloves; wraps; giftables; day bags, and even jewelry.

It also is undergoing retail expansion, with plans to open more doors in still-to-be-determined locations over the next five years to complement its flagship here, which reopened last year, and its boutiques in Atlanta, Los Angeles and Las Vegas.

This month marked the release of the third installment in Judith Leiber’s new print ad campaign. The campaign, photographed by Jessica Craig Martin, features an extended range of items on what the brand calls “celebutant friends of Leiber,” such as rapper Nelly, actress Nia Long and socialite Ivana Trump.

In addition, in the next couple of weeks, the brand will be embarking on its first e-commerce venture with the relaunch of its Web site, judithleiber.com, which will include a range of products for sale and photos from the red carpet of celebrities wearing Judith Leiber accessories, from which browsers can directly purchase items.

Business, according to a spokeswoman at Judith Leiber, is responding. Growth underwent a 14 percent gain in 2004 and is shaping up for increased momentum in 2005.

“When I came on board, nothing was broken,” said Zambrelli. “Judith Leiber made a superbly crafted product using the finest materials, and luxury remained a constant for the brand. But for me, it was looking at how luxury is relevant in 2005. We might be dealing with the same type of customer, but she has a modern life that is more varied. She may need a bag to stuff her sneakers in on the way to the gym. So we are doing a whole lot to broaden the product.”

Zambrelli, who started his career in fashion at Chanel and later worked for John Varvatos, Cole Haan, Ralph Lauren and Coach Leatherware, initially came to Judith Leiber in early 2004 to launch its shoe collection. He soon began applying the house’s signature touches, such as crystals and the use of exotic skins, to other accessories categories, and eventually took on the role of creative director in June 2004.

“We think there is potential to leverage the strong brand equity that Judith Leiber has in place,” said Andrew Cooper, the company’s interim ceo. “The core evening bag category has had a team in place and they know how to interpret Judith Leiber in the marketplace, but Frank had a vision that went across all categories.”

For spring, Zambrelli worked the lotus flower symbol throughout the range, interpreting it in tonal colors on a minaudière, in paint on canvas for a zip-up day tote with crocodile accents and in layered appliqués on a day-to-evening shoulder bag. Crystals took on new shapes, growing larger to accent a closure on a bag or the frontispiece on a strappy heel. Zambrelli also rethought the iconic Judith Leiber bag by applying a blanket of crystals to a clutch with a soft case designed from silk satin.

“Crystals have been the lead-off for years, but now it’s a lead into dimensionality,” said Zambrelli. “We are playing with the size of the stones, combining the stones with unexpected materials and interpreting that dimensionality the crystals created by finding the same depth in layers of fabrics and colors and the use of hardware.”

Prices for select items can still climb as high as $95,000, but Zambrelli said the brand also is creating looks at more affordable prices. Some bags now retail for around $1,200, while sunglasses can go for $200 and a key chain retails for $125.

“The market has been doing things so aspirationally,” said Zambrelli. “It’s allowing us to do what Leiber does in more approachable price points. Having the store reopen in October 2004 has also been an inspiration for us because it has allowed us to present a whole new world to the consumer.”

It is still too early to judge whether the expansion will succeed at its core distribution of department and specialty stores, however.

“Judith Leiber has been with the store since the brand’s inception,” said Lincoln Moore, a divisional merchandising manager at Saks Fifth Avenue. “[Zambrelli] has really stepped out with the brand in terms of what he’s doing. Recently, we feel like there is a bit of a younger customer who is coming to shop the range, and we feel there is enormous potential for them to grow, mostly in the evening category.”

Cooper concurred that evening still likely will drive the business, but he’s optimistic the expansion will only continue to evolve.

“The evening bag is still our core business that we serve, and that is the core product that the customer looks to us for,” he said. “But we believe we can maintain our existing customer base while addressing a new customer and introducing products that address a more full accessories spectrum. I think it’s important as a company that we take the leadership in creating the brand in the way we want to present it in the marketplace.”