Beyond the Runway: Judy Chicago on the Power of Art and Returning to the Womb

"It’s been the greatest creative opportunity of my life," the 80-year-old feminist artist said of working with Dior's Maria Grazia Chiuri.

PARIS — Judy Chicago is having the time of her life. At 80, the feminist artist, who views herself as an art world outsider, has been given a global platform, courtesy of Maria Grazia Chiuri, who commissioned her to create the set for her Dior spring haute couture show.

The installation — 300 feet long, 65 feet high and 50 feet wide — represents a reclining goddess figure, and was originally designed in the Seventies but never produced. With the help of show producer Alexandre de Betak, “The Female Divine” now sits in the garden of the Rodin Museum, where it’s open to the public until Jan. 26.

The irony isn’t lost on Chicago. Rodin is known as much for his virile sculptures as he is for his tumultuous relationship with his pupil and mistress Camille Claudel, who eventually succumbed to mental illness.

Chicago described entering the museum on Sunday, after spending most of the day working in her womb-like tent: “Even though, of course, I know Rodin’s work, I was acutely aware of how masculinist it is. And then I thought, ‘Fine: masculine there and feminine here — perfect!’ If the world was like this, it would be a lot better,” she said with a laugh.

The artist is best known for her Seventies installation “The Dinner Party,” which highlights the role of women in history and culture through elaborate dinner table place settings, dedicated to figures ranging from Boadicea to Virginia Woolf, and featuring hand-painted plates depicting elaborately stylized vulvas.

Chicago, wearing a custom-made gold tuxedo and sporting purple hair, said it was a “complete shock” when Dior contacted her.

“It came out of the blue, but you know what, my career — if you know anything about it — has not been a traditional career. I mean, usually, if you achieve as much as I have been able to, it’s because of a powerful curator, collector, critic. I’ve had none of that. In fact, I’ve had the opposite. I’ve had the entire art world trying to kill me and my work,” she said.

So does she feel a sense of sweet revenge? “I’m really not into revenge,” she demurred. “I feel like it’s just amazing. It’s been the greatest creative opportunity of my life, and to be able to say that at 80 and to be able to make art at this scale, it’s fabulous.” 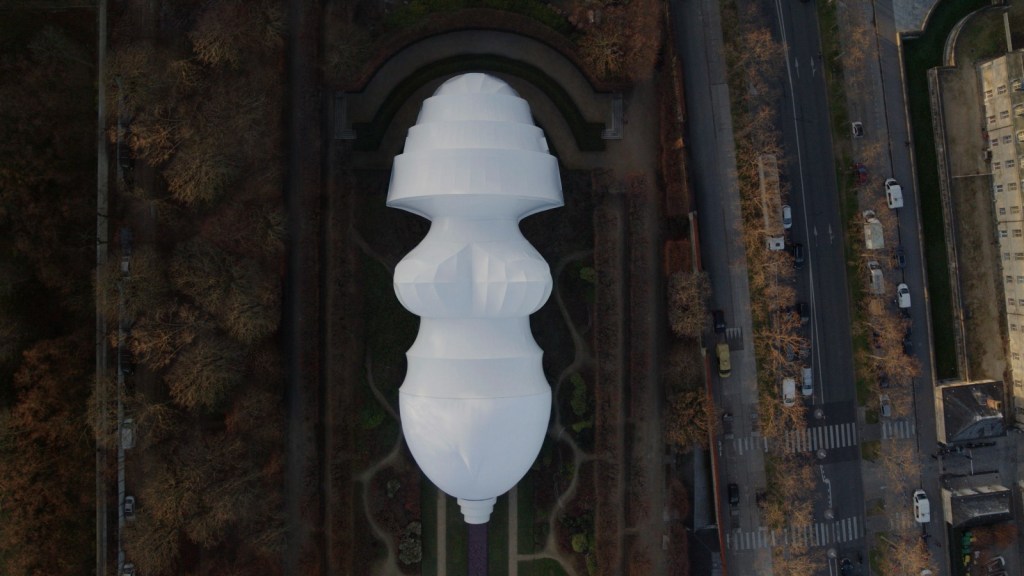 The exterior of the Dior Couture Spring 2020 show.  Courtesy Photo

Chiuri has made activism a signature of her Dior tenure, starting with the “We Should All Be Feminists” T-shirt in her first show for the house in 2016, inspired by Nigerian author Chimamanda Ngozi Adichie’s essay of the same name.

“Judy Chicago invites us to reconsider the roles and power relationships that determine, though the lens of gender, the way we live together today,” Dior said in a statement.

Guests including Uma Thurman, Sigourney Weaver and Monica Bellucci entered the structure through the vulva. “Yeah, we’re all getting to go back in, and given the state of the world, it would be probably pretty good if we could hide out for a little while. Oh my God!” Chicago hooted.

Chicago, who took in the show seated between Dior chief executive officer Pietro Beccari and actress Kristin Scott Thomas, noted that a lot of artists have worked with fashion brands, but she considers many of these projects purely commercial.

“I brought to the collaboration with Maria Grazia, I think, something unusual in terms of art as fashion, which is one), a deep knowledge of women’s history, goddess symbolism, and also a huge amount of knowledge about textile and needle techniques,” Chicago said.

The space, bathed in changing light, features a specially woven purple catwalk carpet adorned with thousands of flowers in a millefleurs design. The artist — who has often used needlework in her projects — designed 21 banners embroidered in English and French, starting with the question: “What if women ruled the world?” 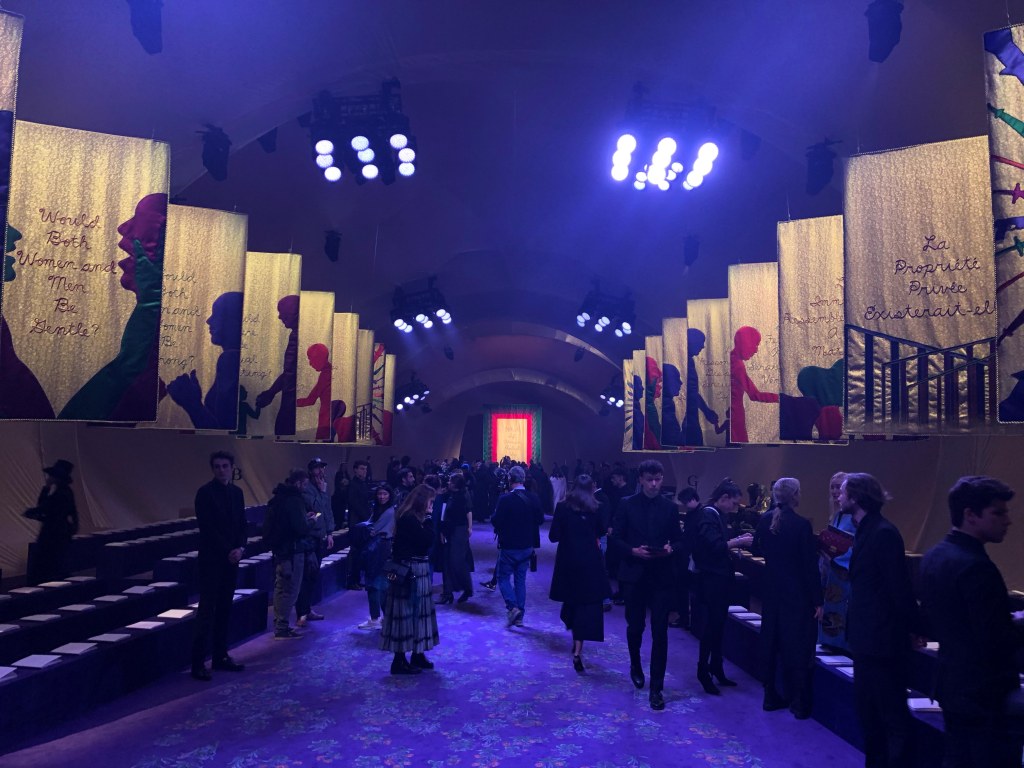 The interior of Judy Chicago’s installation for Dior.  Joelle Diderich/WWD

The gold brocade flags were embroidered at a school in India, as part of Dior’s efforts to support female students in what is traditionally a male-dominated sector. “Would God be female?” one of them read. “Would there be violence?” questioned another. “Would old women be revered?” a third one pondered.

“They’re just questions, aren’t they? They’re questions that it will take all of us to answer,” Chicago said.

“You know, when I was young, with the hubris of youth, I thought with my paintbrush I could overcome the erasure of women’s achievements, right? That was when I set out to do ‘The Dinner Party.’ And that hasn’t happened, but what has happened is that I saw demonstrated the power of art,” she continued.

“When ‘The Dinner Party’ became the piece that everybody wanted to see and nobody wanted to show, people organized, created their own institutions, raised money for museums to show the work, and, I mean, look what happened,” she said.

“That’s a very hopeful thing, that there are ways of making positive change to the whole history of the way in which fashion has oppressed women — and now we’re standing in the body of the goddess, and we’re going to see a fashion show by Maria Grazia Chiuri that’s about empowering women through clothes,” she enthused.

Chicago has a strong relationship to fashion and textiles. “This is a Dior suit — I mean, my goodness. This level of fashion has not been within my reach financially, but I’ve tried to develop my own style,” she explained.

“I discovered during ‘The Dinner Party’ that even though I can’t sew a stitch, I have an unaccountable ability to design for needlework. I can just see techniques and imagine them used in all these ways,” Chicago added.

“The reverence for craft that is exemplified in couture is a reverence I understand, because I have it too. For such a long time, and even still today, craft has been denigrated in the art world, and so to be able to work with people who don’t denigrate it, I felt embraced by that sensibility, as opposed to having to go up against it,” she concluded.