Judy Garland Gets Dolled Up For WWD

"On the table by the window stood two bottles of vodka and some quinine water." So read the introduction to WWD’s March 1967 interview with Judy Garland. 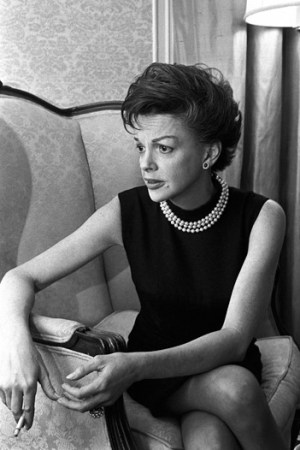 The good ole’ days of celebrity journalism. When profile writers would (or could) set the scene with a line like, “On the table by the window stood two bottles of vodka and some quinine water.” So read the introduction to WWD’s March 1967 interview with Judy Garland, who, just days before, had signed on to play Helen Lawson in the film version of “Valley of the Dolls,” a role generally thought to have been inspired by fellow performer Ethel Merman. (Garland, for her part, was the model for the ill-fated “Dolls” character Neely O’Hara.)

History tells us Garland never appeared in the film; personal demons and her increasingly erratic behavior led to her replacement with actress Susan Hayward (Garland eventually died of a drug overdose two years later, in June 1969). But when WWD spoke with Garland in her New York hotel suite — the 45-year-old star, vodka tonic in hand, in a simple black shift, emerald earrings and a multistrand pearl necklace — she seemed to be looking forward to her future.

Asked if she thought of her part in “Dolls” as a comeback, she said, “I don’t think I’ve ever made a comeback. I’ve always been working. I wonder if they know there are other things about my life. I’ve won a golf tournament. I can cook. I have some nice children.”

Regarding her long-standing reputation for being difficult, she snipped, “Don’t you think it’s a bit boring? It’s really out of style.…It’s been going on for a long time. It started in my early days at Metro [-Goldwyn-Mayer]. It never came out that I was tired. I was doing three pictures at once. I was so scared of not pleasing everybody. I remember once the wardrobe people got confused. They sent me on the ‘Harvey Girl’ set with a pirate costume. I was trying to dance with Gene Kelly and Fred Astaire. “You have to be very demanding to stay sane and keep a very wicked sense of humor about yourself.”

The fact that Garland wanted to appear in the “Valley of the Dolls” movie, albeit as a different character than the one she was thought to have inspired, indicated as much. “I sat around and listened to my own records,” Garland recalled of recent dark days, the result of major financial woes that nearly caused the government to seize her house. “Then I heard from a friend: ‘Have you read that book about you taking drugs?’ So I went out and bought ‘Valley.’”

However, Garland denied that she was totally bankrupt. “I’m not broke,” she said. “I wouldn’t say it if I were. Made a lot of money…not for myself. I started at an age when they didn’t pay too much money. Nobody took care. I know I made millions for other people. I think a lot of people around me have been extremely careless with my money.”

“I plan [to be] a great big shining star so nobody can reach up and tear it down,” Garland said as she walked WWD’s reporter to the door. “You know, I’m 45 — I don’t diet and I believe in humor and beauty.”