Juicy Couture, one of the hottest and fastest-growing fashion brands in the young market, is poised to make a splash in the fragrance arena.

By Julie Naughton and Liza Casabona on July 14, 2006
View Slideshow 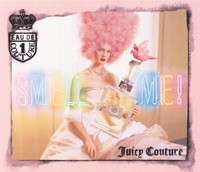 NEW YORK — Juicy Couture, one of the hottest and fastest-growing fashion brands in the young market, is poised to make a splash in the fragrance arena.

Nine years after Gela Nash-Taylor and Pamela Skaist-Levy launched their fashionable tracksuit line, the Los Angeles duo is getting ready to launch its first signature women’s fragrance with Liz Claiborne Cosmetics. And the proposition is notable — from the unusual depth and variety of the product lineup to the unheard-of length of a three-month-exclusive with Bloomingdale’s, which suggests that the new fragrance will have a pervasive presence throughout the store. Market speculation about the size of the sales target is equally bold. Although executives refused to break out projections or budgets, industry sources estimate that the Juicy Couture fragrance range could generate as much as $75 million at retail worldwide in its first year on counter, with U.S. sales likely to account for 50 to 75 percent of that figure. Sources also estimate that at least $10 million will be spent on advertising and promotional efforts in the U.S.

Although the Juicy Couture founders have been busy nurturing a small fashion empire, the idea of one day doing a fragrance had been percolating, Nash-Taylor said. “We wanted the world to smell like us — that’s where we started from. We’ve wanted to do a fragrance for a long time, as it was a natural evolution of our brand.”

Juicy Couture, founded in 1997 and purchased by Liz Claiborne Inc. in March 2003 for $47 million, has been expanding for the past three years beyond its signature tracksuits and moving into men’s wear, children’s wear and a host of accessory categories, including shoes, purses, swimwear and watches.

Earlier, Nash-Taylor and Skaist-Levy launched an upscale line, Couture Couture, which includes eveningwear, and they are readying a baby line and home products. This fall, the first national advertising campaign for the Juicy Couture franchise will break, and more developments are on the horizon — all designed to make the company a billion-dollar brand by 2010.

“The subtitle to everything we do is ‘surprise,'” said Michelle Sanders, vice president and fashion director at Juicy Couture. “In the past, our marketing strategy was doing p.r. and celebrities, which worked well for a long time. In order to grow, though, we understand that we need to get our vision out there, so we decided to advertise.”

While all executives involved declined to comment, industry sources estimated that the Juicy Couture universe now does upward of $300 million at retail — and the brand’s first fragrance is expected to significantly add to that figure.

“This is a Juicy brand; we’re executing their vision,” said Art Spiro, president of Liz Claiborne Cosmetics. “Pam and Gela are like a GPS system — they’re never off course.”

The scent, which Skaist-Levy describes as “like something Barbie might wear,” was concocted by Harry Fremont of Firmenich. “We wanted something that had white flowers, that was feminine, but also fun and fresh,” said Nash-Taylor. “We didn’t want over-the-top perfumery, just notes that we both love, like tuberose and vanilla and watermelon.” The final result has top notes of watermelon, mandarin, pink passionfruit, bright marigold, fresh green apple, water hyacinth and crushed leaves; a heart of couture tuberose absolute, wild rose and princess lily, and a drydown of caramel crème brulée, vanilla, precious woods and patchouli.

Each of the items has slightly different packaging. The 1-oz. perfume, made of crystal with a locket on a cord wound around the bottle’s neck, is in a fold-out, vanity table-like outer box with a mirrored back and a drawer equipped with a tiny Juicy Couture notebook. The 3.4-oz. and 1.7-oz. sizes are in glass rectangles with faceted tops and silver-toned Juicy Couture crests, with two charms hung off the bottle necks: a silver-toned J and a gold-toned crown. The 1-oz. travel-size bottle has a metal outer finish, with an attached charm of red cherries, which is intended to be added to a charm bracelet; each season the charm will change, noted Spiro. The 20-oz. eau de parfum is a weighted glass rectangle with a faceted top and a silver-toned crest, topped with a bow-and-crown charm. It also includes an atomizer and an empty 1-oz. bottle in which to decant the fragrance.

The fragrance will be launched at Bloomingdale’s in August and will remain there until October. It will enter specialty stores at the end of October, and “a very select group” of department stores at the end of November, said Spiro. By yearend, distribution will number about 600 doors. Globally, it will be available in duty-free stores, and it likely will be launched in the U.K.

Like the fragrance packaging, the advertising — created by Laird and Partners and photographed by Tim Walker — will include a number of looks. Key to the effort is an eight-page insert that includes four fashion images and four beauty shots; the insert will begin running in September fashion, beauty and lifestyle magazines. Single-page ads will alternate between a visual of model Linda Kant with teased-up hair resembling cotton candy, and a shot of tiny dogs tinted in fanciful pastels. The spread advertising was modeled after a vintage Cecil Beaton photograph of debutantes that appeared decades ago in Vogue. “We’ve always been obsessed with royalty and debutantes,” said Nash-Taylor of the ad’s inspiration. Outdoor advertising in New York and Los Angeles is planned, and the fragrance will also get a socialite-stuffed launch party in the Hamptons in early September, noted Marcy Fisher, vice president of cosmetics marketing at Liz Claiborne.

In addition, fragrances aren’t the only licensed product the Juicy girls have on tap. “We have watches, sunglasses and swimwear that are all coming out,” said Nash-Taylor.

The first Manhattan Juicy Couture flagship opened late last month at 103 Fifth Avenue, and three more locations in the city are planned. Upcoming stores are planned for 11 markets across the U.S., plus Milan and London. By yearend 2007, the plan is to have 40 freestanding units, said Sanders.

Skaist-Levy noted, “We can put things that we love in there and arrange everything exactly the way we like,” the final result being “like California mixed with English royalty,” she said with a laugh.

While some designers modestly say they were surprised by their line’s success, the Juicy partners said they expected the response to their line. “We think big,” said Nash-Taylor.

Added Nash-Taylor, “[Juicy Couture is] about comfort, and we were part of that revolution of more casual designs and L.A. fashion,” she said.

Next on the designers’ wish list is a color cosmetics collection. “We can’t wait, but you need to do one thing at a time,” said Skaist-Levy. “We have been playing around with colors for years.” Added Nash-Taylor, “We used to mix red and black together before there was a [Chanel] Vamp. We can’t wait to do nail polish.”

One potential obstacle has been avoided. The Lancôme division of L’Oréal has been marketing its hot-selling line of cosmetics products, ignited by the launch of its Juicy Tubes brand in 2000. In 2004, Juicy Couture and Liz Claiborne Licensing Inc. filed a lawsuit against Lancôme Parfums Et Beauté alleging trademark infringement, trademark dilution, unfair competition, and deceptive practices. Lancôme currently markets cosmetics under the brand names Juicy Tubes, Juicy Rouge and Juicy Wear, among others. According to court documents, Juicy Couture objected primarily to Lancôme’s use of Juicy Wear, arguing that it was confusingly similar to the apparel brand.

The bulk of the case was concluded in April. The court said that Lancôme had the right to continue marketing its “Juicy” products and that they did not infringe on Juicy Couture’s trademark registrations, which are mostly for apparel. As for Juicy Couture’s plans to expand into the cosmetics market, the company’s rights to extend its brand into cosmetics were not in question during the lawsuit. In her opinion, U.S. District Judge Denise Cote (Manhattan) specified that this particular lawsuit was not the occasion to address Juicy Couture’s entry into the category. No countersuit was filed by Lancôme, and to date all that remains to be decided before the outcome of the lawsuit is finalized are some procedural questions.

Meanwhile, there are other potential fragrances on the horizon. “Fragrance is like color — it changes your mood,” said Skaist-Levy, who said she and Nash-Taylor are planning an entire portfolio of scents, including a men’s scent that she promises “won’t be overbearing.” And the next women’s fragrance will be “musky, flirty and more sensual, but not too perfumey,” said Nash-Taylor.

“Who knows, we might even do a dog fragrance,” said Nash-Taylor. “Why shouldn’t the whole world get Juicy?”

— With contributions from Liza Casabona