Juicy Couture is launching Couture Couture for spring, with styles such as a jeweled dress with organza underskirt and a lace strapless dress. 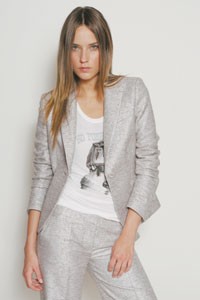 NEW YORK — After almost nine years, Juicy Couture is living up to its name.

The California-based — and inspired — contemporary brand in spring will launch Couture Couture, a 20-piece designer collection featuring intricately crafted pieces such as a jeweled dress with organza underskirt and a chantilly lace strapless dress. The average retail price for the Couture Couture collection is $680, compared with Juicy Couture’s average retail price of $180.

Co-founders and co-designers, Pamela Skaist-Levy and Gela Nash-Taylor thought the timing was right to introduce an upscale, highly edited collection. From a design standpoint, they were ready to take their craft to the next level.

“We’re not a one-trick pony,” Skaist-Levy said. “Our background is in design. We just hit with the tracksuit.”

Couture Couture is a long way from the candy-colored Juicy Couture tracksuit. In addition to the jeweled and lace dresses, the collection includes other notable pieces such as a pleated silk ballerina skirt, a linen and steel silver suit and a trench. Wholesale prices range from $65 for a silk viscose tank to $1,100 for the jewel-encrusted linen dress. A black, jewel-encrusted skirt has a wholesale price of $545.

The company, a division of Liz Claiborne Inc., declined to provide a projected wholesale volume for the first year.

Couture Couture is targeting the top specialty and department stores in each market for select distribution, domestically as well as in Europe and Asia. Among them are Neiman Marcus, Bloomingdale’s, Barneys New York, Bergdorf Goodman, Saks Fifth Avenue, Nordstrom, Fred Segal and Jeffrey in the U.S. In Asia, the stores are Isetan in Japan and Lane Crawford in Hong Kong; in Europe, Colette in Paris; Harvey Nichols, Browns and Selfridges in London and Luisa via Roma in Italy, and in the Middle East, Villa Moda.

“The feedback we’ve gotten is such that the perceived value of the collection is there,” said Rebecca Blair, Juicy Couture’s vice president and general manager of merchandise and sales. “It’s for a more sophisticated and urban customer and it will hang with other designer collections.”

Blair said she envisions Couture Couture hanging in specialty boutiques worldwide near labels such as Chloé, Marni and Temperley. “We see Couture Couture as a designer collection,” Blair said. “The consumer will know it’s a different collection. It won’t be branded with ‘Juicy.’ The label says, ‘Couture Couture Los Angeles’.”

Ron Herman will carry the collection at its Beverly Hills location and Fred Segal will have the line upstairs in its Melrose Avenue store in Los Angeles, where the collection will share the floor with labels such as Chloé and Marc Jacobs.

“I thought it was done really beautifully and executed very well,” said John Eshaya, creative director and vice president of women’s wear for Ron Herman/Fred Segal. “You look at the pieces themselves and see them other than being Juicy. I looked at the clothes solely on their own merit. I would have bought that dress from anyone,” he said, referencing the jewel-encrusted dress.

“[Pam and Gela] have amazing taste. Young Hollywood girls who buy stuff like Chloé from us will buy this collection,” he said.

Frank Doroff, senior executive vice president of women’s ready-to-wear at Bloomingdale’s said, “Bloomingdale’s is very excited about the new Couture Couture line and will definitely be carrying it next season. The Couture Couture collection stays true to Pam and Gela’s design style but is more sophisticated with more luxe fabrics.”

“Most lines start at the top and go down,” Nash-Taylor said.

“We did the opposite,” said Skaist-Levy, picking up the thought. “Everyone wants to do casual, but we wanted to go dressier.”

Skaist-Levy and Nash-Taylor are admittedly obsessed with fashion and have been since they met in 1988 and began designing the maternity wear line under the Travis Jeans label as a solution to Nash-Taylor’s inability to find stylish maternity clothes when she was pregnant with her first child.

As they see it, Couture Couture is a necessity because without it the brand isn’t reflective of them, which contradicts the premise on which the company was built. “Gela and I go to so many events now and we love — and wear — other designers, but we wanted to wear our own collection,” Skaist-Levy said. “Juicy can only take you so far.”

Until now, that is. The pair want women to look to their brand for evening wear, the same way Nash-Taylor and Skaist-Levy had looked to their favorite designers, such as Prada, Lanvin, Rochas and Louis Vuitton for dressier occasions. Though Juicy Couture and Couture Couture are two very different collections, Nash-Taylor said the Juicy woman is distinct and will be drawn to both. “There’s a bit of that socialite flair with a sense of humor in our clothes,” said Nash-Taylor.

The time is opportune, Nash-Taylor believes, to launch a designer collection. She said women are dressing up more frequently and are not saving their finest dresses for just formal occasions.

After all, it was the swing of the fashion pendulum which prompted the partners to launch Juicy in 1997, when women were seeking ultracomfy yet stylish casualwear alternatives. Women went from “wearing hose while shopping at Nordstrom,” as Nash-Taylor said, to wearing velour tracksuits as much as they could.

As women designers, they believe they have an advantage when it comes to designing a collection such as Couture Couture. “The one difference with women designing for women is that we’re maniacally obsessed with our defects,” Nash-Taylor said. “We design to cover the defects. Clothes on the runway sometimes have bizarre silhouettes. We’re real women who have pretty average body types, and we want to design wearable clothes that don’t only look good on models.”

Couture Couture for spring is just one of the launches for the brand this year. A full line of footwear and sunglasses will also break in spring. The footwear, which has been licensed to Schwartz & Benjamin, includes an array from gladiator sandals to bejeweled stilettos and even cowboy boots. The sunglasses have been licensed to Safilo. The wholesale price range of shoes is between $17 for flip-flops to $300 for cowboy boots; sunglasses wholesale for $92.50 to $130. A fragrance is expected to follow late next year. Also in 2006, Skaist-Levy and Nash-Taylor hope to open 15 to 17 freestanding Juicy Couture boutiques globally, three in Europe.

Juicy Couture on Nov. 8 will receive the Ace Award for Accessory Brand Launch.

“It’s hard to imagine people thinking we couldn’t do what we wanted to do,” Nash-Taylor said. “We’re willing to work hard. We are obsessed with fashion. When you love everything you’re doing, it opens a lot of doors.”