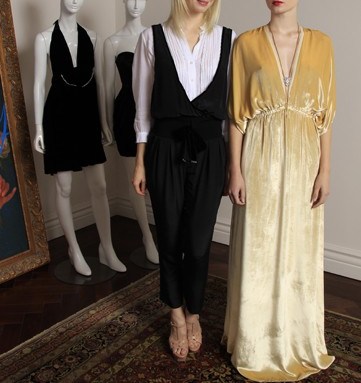 When Erin Fetherston took over as creative consultant for Juicy Couture in May, her first order of business was on the social circuit. “I attended the Met Ball,” says Fetherston. “That was my first official workday. I attended on behalf of Juicy.” Few would have known at the time, but that glossy, star-packed night would have a major impact on the direction of the Liz Claiborne Inc.-owned concern, now no longer helmed by founders Gela Nash-Taylor and Pamela Skaist-Levy. Fetherston wore her first Juicy Couture design, a Thirties-style champagne-colored velour gown with draped dolman sleeves. It’s now the inspiration behind her debut collection for the firm.

Launching for holiday, the 11-style lineup — which includes a version of that gala gown — gives the brand a glam new makeover, working a dressy Thirties-meets-Seventies vibe. (Fetherston’s inspiration board includes photos of Bianca Jagger, circa Studio 54, and herself at the Met.) There are bugle-beaded blazers, sateen-trimmed jackets, beribboned draped skirts and bustier dresses. Even the more sportif designs skew urbane; a jumpsuit is cut from washed silk and features a wide waistband and velvet drawstrings capped with rhinestones. Is a new era of Juicy Couture at hand?

Not quite. Fetherston’s quick to note she’s not abandoning the company’s laid-back roots. “I want to be clear that this is a holiday capsule, so it’s more dressed up for the season,” she explains at a press preview Thursday. “We’re not trying to take Juicy away from being a casual brand. But my vision is to take things out of the box of just sportswear or leisurewear.” For a designer who’s known for cocktail attire, however, it doesn’t hurt that the launch’s timing offers an easy segue into what she says will be a more relaxed spring lineup.

For starters, Fetherston stays true to the label’s penchant for velour, treating the textile as velvet so her garments come draped, smocked and tucked for a louche, fluid effect. “You can treat it the right way so it has a luxe look,” she says. “I don’t think that many people want to wear the velour pant and velour hoodie together.”

Nevertheless, next year, in celebration of its 10th anniversary, Fetherston will tackle the iconic Juicy Couture tracksuit. While she won’t divulge details yet — not even whether the company plans to mark the occasion with a marketing blitz — she does note that her approach will involve deconstructing the concept of a tracksuit. “It’s more mixing and matching and new silhouettes,” she explains, adding that prices for the label will remain the same. Holiday ranges from $72 to $172, wholesale.

“This is a major opportunity to reinvent Juicy’s perspective on casualwear, to rev it up and make it cool and fashion-forward,” she says.

The designer also whipped up a series of Art Deco-inspired jewelry — lavalieres and rhinestone headbands — to go with holiday’s debut. “My role here is to connect all these product categories and make sure the vision is cohesive,” says Fetherston, who will also consult on accessories, kids, advertising and store interiors, too.

As for Nash-Taylor and Skaist-Levy, Fetherston notes that she’s neither met nor spoken to the two. Like the founders, however, Fetherston plans to be a very visible part of the brand. “Juicy’s looking to me to be an ambassador,” she remarks.

Product categories, however, have been streamlined; the Los Angeles-based company recently eliminated the men’s, yoga and maternity collections. “They were not relevant to the Juicy brand,” he says. “We’re also cleaning up distribution. We’ve closed at least around 70 doors.”

So how has Fetherston found working within a big enterprise like Liz Claiborne, which can pull together, as Hubar puts it, an “advertising A-Team”? “If you think about it, the Erin Fetherston collection and Juicy aren’t so different,” she says. “My line’s totally free-spirited and fun-living, and those are words I would use to describe Juicy Couture also. The product expression is just different.”