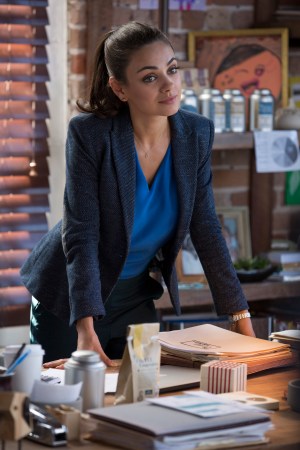 Costume designer Julia Caston has gotten very familiar with mom style as of late — and we’re not talking mom jeans.

She dressed the cast of the new comedy “Bad Moms,” in theaters today, and all the various iterations of modern mom-dom were repped in the film. “These characters, I sort of thought of as pieces of one woman,” she explained of her approach. It helps that Caston, as well as the film’s stars — Mila Kunis, Kathryn Hahn, Christina Applegate, Kristen Bell and Jada Pinkett Smith — are all working mothers themselves.

“I took my inspiration from the people around me, my friends, other mothers I know. It’s such a universal thing to see working mothers struggling to fit in, how they work. So I got inspiration from that,” Caston said. “And the actors really brought so much to the table as well as far as their experiences.”

Kunis stars in the film as Amy Mitchell, an overworked mother who ditches her quest for perfection and having it all, letting loose as the film progresses. “She’s a comfortable, accessible mom struggling,” Caston said. “She starts off wearing suits and then she decides to let everything go; she’s more free…ready to take on anything that comes her way. She’s not as buttoned up,” she continued. “So her clothes reflect that, they’re more comfortable, they’re jeans, they’re items that moms would have around the house.”

Kristen Bell plays Kiki, a character who is “a little shut in, a little scared of life, overly pretty, overly feminine,” described Caston. “If I had to sum up Kiki in one word it would be mint. She has a million kids and they’re constantly throwing up on her. She never really gets to go out. So her clothes are very safe. Mint is that color.”

Bell originally saw the racks of pastel that Caston pulled for her and expressed fear of looking too girly. “Once she started trying them on I was like, ‘it isn’t little girlish, it’s matronly!’ But she really just went for it,” Caston said.

Kathryn Hahn plays a sultry, sex-craving single mom named Carla, who joins forces with Amy and Kiki. “Kathryn is an amazing comedian and she brought so much to the table, that I sort of just dragged behind her. I could basically put anything on her,” Caston said. “She’s described as brash and sexy. And really comfortable with herself — and cleavage. Ready to put herself out there and ready to have a good time.”

Christina Applegate carried the role of PTA mom Gwendolyn, the movie’s antagonist. “There’s a little bit of her in all of us. That strives to be a perfectionist and control everything. And I think we need that a little bit. All schools need that a little bit,” Caston said. “She’s kind of like my ice princess: expensive and cold.”

That translated to Caston seeking out a tighter, more structured silhouette for the character, dressing her in higher-end designers: Roland Mouret, The Row and Victoria Beckham, as well as contemporary brands Vince and Elie Tahari.

To fit such a range of character aesthetics, Caston found her apparel sourcing somewhat limited by the film’s shooting location.

“We shot in New Orleans, which is not really known for its shopping,” she explained. “So we had some designers send us some things, which was great — like Max Studio and Elie Tahari would send us things, and tons of sportswear. But we basically scoured New Orleans for anything that would fit into these set character structures.”

She looked to consignment shops as well as the city’s Saks Fifth Avenue location. “The thing is, as a mom, we shop high-low all the time. Save up for a pair of great shoes and buy a pair of jeans off the rack or whatever. And I tried to incorporate that. Where would Amy get these things? Where does she shop, does she have the money for these things? So I tried to keep that in consideration.”

And while the moms in the movie may be “bad,” Caston said that working with the actresses on set was anything short of amazing. “When I got to New Orleans, I thought ‘Oh no, I’m going to have to work with all women everyday, are they going to be mean? Are they going to beat each other up?’ But once we got working, everybody was so giving and generous and collaborative,” she said.  “And really that was the best part of it. There was no bad apple.”