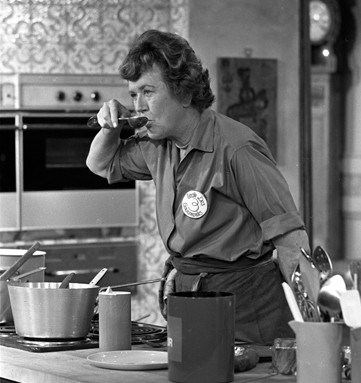 There are two reasons that Julia Child’s oeuvre is as relevant today as it was during her 40-plus-year career. The first, perhaps most obvious, is the summer release of Nora Ephron’s “Julie and Julia,” which stars Meryl Streep as the inimitable chef and Amy Adams as Julie Powell, the woman who spent a year cooking (and blogging about) every recipe in Child’s “Mastering the Art of French Cooking.” The second is more subtle — while Child championed French haute cuisine in her cookbooks and PBS show, “The French Chef,” she took pains to make artful cooking accessible and, indeed, affordable to American audiences. Good food doesn’t need to be expensive! Save money by eating in and cooking for yourself!

So when WWD sat down with her in 1972, the Cambridge, Mass.-based Child took the opportunity to spread the gospel of cheap eating, which bears repeating in this age of thin wallets and recession specials. “Prices are too high only if you don’t know how to cook,” said Child, who also prepared a meal for WWD’s lucky reporter. “Then all you can make is steak. But haute cuisine can be very inexpensive — low-cost cuts of meat simmered in wine and herbs for a long, long time. Don’t complain about high prices. For God’s sake, learn to cook and stop squawking!”

Airline food was particularly egregious to Child, who saw such frozen meals as tantamount to robbery. “[My husband Paul and I] take our own sandwiches and our own wine when we travel,” Child said. “It’s either that or limp, frozen broccoli and smelly steaks. We ought to get a rebate. I resent very much paying for this horrible food in the price of my ticket — food that you can’t eat!”

And, as if to prove her point, Child recorked the wine she had served our reporter with lunch, leading WWD to conclude: “An oenophile might shudder, but Ms. Child is willing to commit a heresy now and again.”

Here, outtakes from WWD’s lunch with Child, as well as some pics from our 1970 shoot on the set of “The French Chef.”