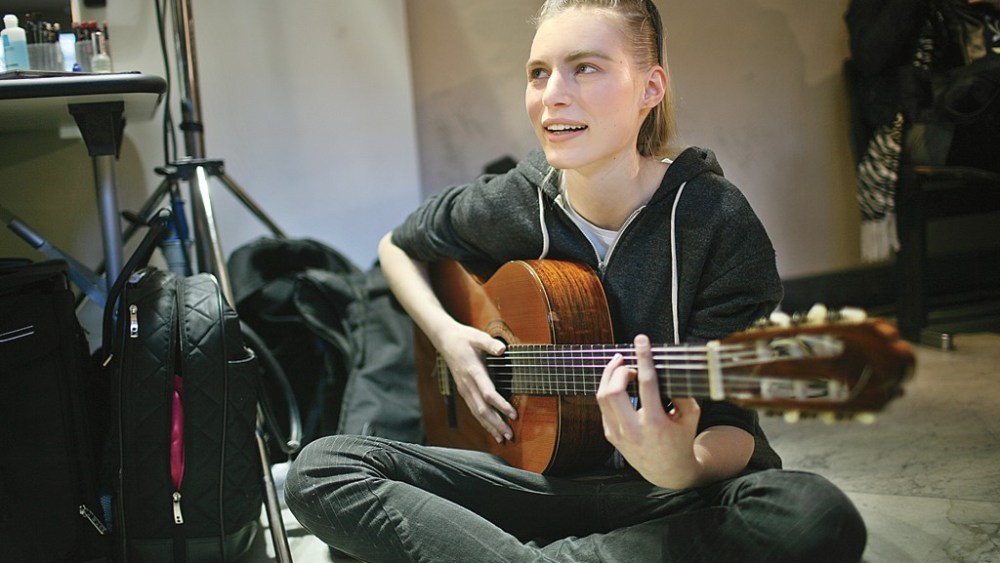 Julia Nobis is not above self-deprecation. For a recent friendly meet-up with an ex-boyfriend, she wore a rugby shirt and jeans — topped off with a floppy beanie and a hot pink tutu. “I love making him feel uncomfortable by dressing like a complete idiot,” says the 19-year-old model in her charming Aussie twang.

On this particular afternoon, Nobis is looking far less festive, her gangly frame covered in a hoodie, tank and jeans (albeit from Richard Chai, Alexander Wang and Superfine), oversize headphones strung around her neck. This is her typical getup. “I’m very much a first-shirt-on-the-pile, whatever-jeans-are-clean kind of dresser,” she says, noting that she’s always favored a tomboy, minimalist aesthetic. As a kid she dressed “like a straight-up boy. I used to get mistaken for one all the time, like, ‘Uh, sir?’”

It’s that pseudo-androgynous streak (coupled with some striking facial features) that has made Nobis a veritable industry darling, the most in-demand model for the fall 2012 season, walking some 72 shows. Her secret to keeping calm through it all? Playing the guitar, which she does backstage whatever chance she gets. “I bring it if I’m somewhere for more than four days,” she says.

It was just four years ago that Nobis was introduced to the modeling world. Then 5 feet 10 inches tall (she’s 5 feet 11 inches now), she was spotted at a Sydney train station on her way home from a high school drama club meeting, skateboard tucked under her arm. “A woman tapped me on the shoulder and I thought she wanted directions,” Nobis recalls. “She asked me, ‘Are you a model?’ I outright laughed in her face.” She signed with Priscilla, her mother agency, a few days later, but made it clear she wasn’t going to give up school. “I told them, ‘I can work during holidays, maybe after class,’” she says. “I thought modeling could be like a hobby.”

So she focused on her studies, doing a test shoot and some small jobs here and there until her senior year, when her booker asked if she’d like to do a show at Sydney Fashion Week. “I was absolutely terrified. I had never worn heels before,” Nobis says. She managed to make her runway debut without toppling over but it wasn’t entirely blunder-free. “They used gold leaf all around my eyes and I got a chemical burn from the glue,” she says. “I had these red panda eyes. I wore aviators to school that week.” Needless to say, that’s when a Ford Models scout came to town and wanted to meet her. Panda eyes and all, Nobis was signed. “She was like, ‘The minute you’re finished with school, you’re getting on a plane to New York.’” She flew Stateside that following January, just in time to make the New York collections castings.

Three years in, she’s got the runway thing down pat (not to mention a few campaigns along the way, including Burberry, fall 2010; Proenza Schouler, spring 2011, and Balenciaga, fall 2011) and looks forward to the end of each season, or what she calls Get Fat Month: “I just lay on my couch and eat Hershey’s Cookies ‘n’ Cream bars and Ferrero Rochers.”

Most Coveted Look: “Versus. It was jeans, a shirt and boots. I felt right at home and joked with Chris [Kane], ‘Look, if I just bailed wearing this, is that cool?’ I could have kept walking right off the runway!”

Most Difficult Shoes: “Yves Saint Laurent. I had these superhigh pumps. Even though my feet are long, they’re very narrow so they don’t stay in pumps. I had in four heel grips and tape all around the back. It wasn’t my best walk.”

Backstage Panic: “At Versace, I had the shortest change. I think there were seven looks in-between my first and my second. Everyone was freaking out about whether or not I’d make it. Thank God my first look was a big coat with snaps all the way down. It was like a striptease—I ripped off the coat and bam!”

Best Trick: “This season at Giles, everyone was falling during rehearsal so we put hair spray on the bottom of our shoes. It acts like a glue—great for runway, not so good on carpet.”

Most Uncomfortable Outfit: “At Alexander McQueen, I had one of the big fur coats that had like five different types of animals in it. Then you’ve got a half-corset underneath and a tight belt so you can’t breathe; you’re overheating and you’re exhausted. We all were just standing around these fans backstage trying not to pass out.”