Calling his collection White Rabbit and showing it in a local Berlin park, Zigerli took a fun yet more subtle approach to his usual sporty zaniness. 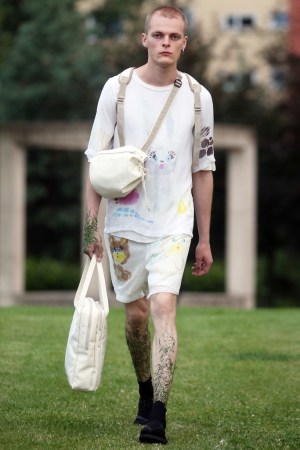 Call it splendor in the grass — for spring Julian Zigerli staged his Mercedes-Benz Fashion Week Berlin show guerrilla-style in a local park, with models walking to the beat of their personal Bluetooth speakers. Zigerli’s own animal instinct was a little more tame, however, as he called the collection White Rabbit.

While other MBFWB designers collaborated with Snoopy (Kaviar Gauche) and SpongeBob (Patrick Mohr), Zigerli created original cartoon motifs working with Japanese illustrator Seitaro Ito. These included bunnies and bananas, often strategically placed, and a sort of rabbit-and-carrot camouflage print on button-downs, windbreakers and shorts. Eagle-eyed attendees could catch the real thing: A couple of wild bunnies lurked by the park’s exit after the show.