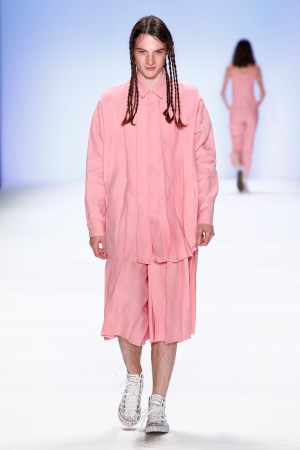 From the start, girls couldn’t keep their hands off Julian Zigerli’s colorful clothes for men. So for spring, he decided to help them out, adding eight women’s designs to his casual and quirky collection,“Sorry.”

The mischievous designer kicked off his MBFWB runway show with a bit of chaos, starting it backward. The lights went up, he came out and waved to the crowd; then a parade of models walked the finale and disappeared. Then, finally, the show began as normal. “We’re actually not sorry for anything, so we basically are doing whatever we want,” Zigerli said afterward.

The Zurich-based designer likes to use performance fabrics, but went au naturel this time around. Seventy percent of the collection was linen, including knits and prints, and what looked like a billowing nylon jacket was actually made from waxed cotton. Wide box pleats showed up on men’s shirts, the hems of women’s jumpsuits, and in culotte shorts for him and her, and everyone got to wear a bit of pale pink. Technical tendencies were saved for graphic patterns of distorted clouds, flowers and messages created with a 3-D modeling program.

At the end of Zigerli’s topsy-turvy show, models strolled a dark runway, with nothing but the mobile phones in the audience to illuminate the iridescent reflective bags from his accessories collab with Qwstion.