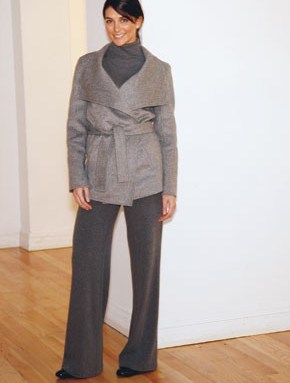 While the fit remains relaxed, there’s nothing laid-back about the attitude inside J. Jill.

The new team is bringing a fresh eye and cleaner aesthetic to the $478 million specialty business and is determined to focus the offerings and awaken the label from its sleepy profile and weak performance.

“Our goal is to build on what works,” said Paula Bennett, J. Jill’s president since January, who was interviewed at a West Side showroom in New York. Key outfits for July through September deliveries were displayed to help tell the fall story.

“This is not a big reinvention,” added designer Michael Leva, who has served as vice president of design and product management since last June. “It’s a gentle change, taking away the dowdiness — a refocus on the core aesthetic. We need to make J. Jill special, but not overdone. Everything has an ease and a simplicity.”

Essentially, the offering has been narrowed, presumably making it simpler for customers to shop the J. Jill stores, catalogues and Web site. Silhouettes aren’t as billowy as in past seasons, or as heavily detailed or embellished. Novelty is attained more through fabric textures.

“There’s an implied shape but it’s not constricting or too tight. The look is not so boxy and shapeless, but it’s still comfortable,” Bennett said.

Nature-inspired colors as opposed to brights; transseasonal fabrics such as lightweight denim and silk blends; knit trousers; layering, particularly twinsets, and outfits equally suitable for office and after hours are emphasized.

Higher-grade cashmeres have been incorporated, while still keeping items under $200, except for leather jackets at $299. Prices start at $19.50 for fitted short-sleeve T-shirts and on average range from $79 to $89 for jackets and $59 to $69 for pants and sweaters. Some youthful items, such as stretch knit denims and slim-fit jeans, have been added, though the objective is to retain a wide appeal, above and below the 44- to 48-year-old sweet spot.

“We are not trying to go young or go old,” Bennett said, adding it’s an image of “un-age cool” that J. Jill seeks to project for its largely suburban Baby Boomer audience.

“Our customer cares passionately about what she is wearing, and wants to appear that she is not trying too hard at it. She doesn’t want to look like she’s spending hours getting dressed. It’s an easy sophistication for every day” of the week.

The company has also dropped the signature-style script logo in favor of a lower case straight-print version, elevated the look of catalogues by becoming selective and creative with backdrops for photo shoots, reintroducing the Pure Jill loungewear knits and introduced Wearever, an all-jersey collection of “desk to dinner” washable pull-ons, geared for traveling.

The changes at J. Jill come none too soon, considering the heat that’s on its parent Talbots Inc. and the Talbots brand, which is struggling with deteriorating profits and depressed stock price, and fighting back by streamlining the head count, store count and inventories while planning additional space for stronger categories and launching outlets in better centers. The company intends to slash $100 million out of the cost structure over the next two years.

This month, two banks curtailed credit lines, prompting some finger-pointing at J. Jill, which was purchased by Talbots in 2006 for $517 million. Aside from adding debt to Talbots, J. Jill’s turnaround has proven tougher than anticipated, with recent sales shortfalls. J. Jill is projected to increase its comp-store sales 1 percent this year.

While there are no current plans to expand J. Jill until the brand returns to profitability, the company does see the potential for 450 stores from the current 273. New concepts, such as a large-size format, outlets with an elevated appeal and international stores, would be considered. There are also plans to merge J. Jill’s headquarters in Quincy, Mass., with those of Talbots, in Hingham, Mass. J. Jill was founded by Carl and Mary Ann Lipsky in 1959 as a custom clothing catalogue service and named after their daughters, Jennifer and Jill. In 1987, the business was acquired by DM Management, and in 1999, J. Jill starting opening stores. There are 72 million catalogues mailed annually.

Shortly after Leva joined J. Jill, he visited the stores and left scratching his head. “There was no message. We were confused ourselves,” said Leva. “Now we are progressing the direction, narrowing the assortments and cleaning up the store.”

“There was good product,” Bennett added, “but just too much of it so no clear message was emanating.”

Another big problem has been with the stores, and the approach to opening them. Sites primarily in areas where it was believed catalogue sales would not be cannibalized were chosen. “The initial thought was ‘Let’s protect the direct business,'” Bennett said. Those always weren’t the best locations.

But J. Jill and its brethren Talbots aren’t the only struggling brands in the better misses’ market. Several have been perusing archives to recapture the brand DNA and culling the clutter on the selling floors. In the most extreme case, Nautica this week said it has decided to dump its women’s line. Liz Claiborne Inc. earlier this year lured Isaac Mizrahi from his Target Corp. gig to re-create the collection for spring 2009. And Chico’s FAS Inc., AnnTaylor Stores Corp. and Jones Apparel Group Inc. are also working through prolonged rough patches, on a quest to find styles that resonate with consumers.

“There’s been a lack of originality and a lack of focus,” Leva concluded about the better misses’ market. “The customer can move ahead of you. Too many companies got too stuck in the past.”