WWD photographers choose their single favorite snap of the season. 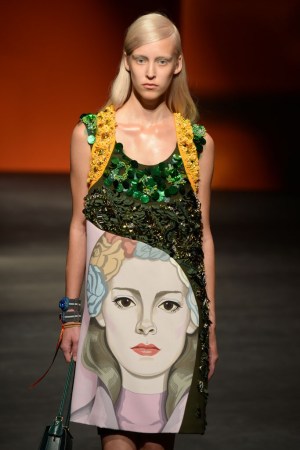 WWD photographers choose their single favorite snap of the season.

RODIN BANICA
“A creative mind with a particularly graphic vision of a chic nurse and a fraction of a second out of a camera bring us to the revelation of a more-than-ready-to-wear Thom Browne spring collection.”

MILES LADIN
“Sometimes front row at fashion week brings together the most surreal combination of guests! Courtney Love was very kissy-kissy with the Brant brothers at the Alexander Wang show. Although I can’t imagine this ‘mother of the year’ to be their fairy godmother, her familiarity was apparent in both extreme flirtation and maternal pride.”

STEVE EICHNER
“The proliferation of street-style photographers and their muses was quite evident this season. I think this photograph illustrates their symbiotic relationship.”

GEORGE CHINSEE
“I am personally drawn to symmetry, so it was a real treat to see and photograph the Threeasfour collection of wearable art. Inspired by sacred geometry and architecture from places of worship, the clothes are also part of an exhibit at the Jewish Museum.”

GIOVANNI GIANNONI
“The image caught my attention for its composition. The dress in this picture underscores the model’s fragile beauty. Her dark hair, which partially covers her eyes, makes her even more mysterious, her pose magnifies the aura of mystery.”

DAVIDE MAESTRI
“The choice was easy….Prada shows are always avant-garde, but this time Miuccia unveiled not only clothes but real works of art.”

LUCA TOMBOLINI
“This picture of the Marco De Vincenzo show earned me my first WWD cover….Such an honor!”

THOMAS IANNACCONE
“After the show, I found these two showgoers hanging out on the street. The guy held the girl’s hands, kissed her fingers, then they were on to the next show.”

ROBERT MITRA
“Jen Kao named her collection “Hound & Hare” and she used Afghan hounds as accessories for her show. Both hound and hare walked the runway.”

STÉPHANE FEUGÈRE
“The perfect front row! I’m lucky to have the privilege of being seated on the ground. Normally I focus on dresses, but at the Saint Laurent show, I was distracted by the front row and the intensity of this moment, which represents the power industry of fashion and its attraction… Power shot!”

KUBA DABROWSKI
“There are these moments when real life (which usually is one big chaos) becomes aesthetically clean like a minimalist painting and people position themselves in your frame like sculptures in a modern art gallery. And the light is just right and she looks great. And that’s it. This one is from Paris. I took it after the Louis Vuitton show.”