In the studio with The Dream and Tricky Stewart, Justine Skye described her rapidly-changing life before Thursday's DVF Awards at the United Nations. 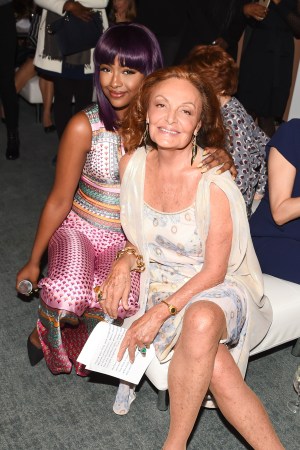 WWD: What’s new?
Justine Skye: I just recently got signed to Roc Nation, which is huge because it’s always been a dream of mine. Jay-Z is from Brooklyn and I’m from Brooklyn so this is the perfect place for me to be. I was with Atlantic.

WWD: What was it like to meet Jay-Z?
J.S.: I thought I would be really, really nervous. I’d wondered my whole life how I would react. Then I met him and he was just so warm and welcoming. I didn’t feel like I was in the presence of “a celebrity.” I felt like I was with my family. He made me feel at home. It was at last year’s Made in America festival in Philly so we were just chillin’. This was way before I got signed. We were just talking and I was hoping that he would remember that I was a singer.

WWD: Are you working on a new project?
J.S.: Yeah, I’m working with The Dream, who actually is my favorite songwriter, and Tricky Stewart. They have a lot of history together. To me, they’re like The Dream Team when it comes to music.

WWD: What sort of ideas are you talking about?
J.S.: I like to draw from situations I’ve been through or even my friends [have]. I watch a lot of movies. That’s where the creativity for visuals come about. I haven’t released a visual in a long time. With this project, I’m going to release a video with every song, kind of like a little movie. I’m really excited for people to see this other side to me.

WWD: Any favorite actors or directors?
J.S.: I don’t have a favorite director. I’m very all over the place. I feel like I have ADD. Recently, I’ve been watching a lot of old movies like classics. I watched “Vanilla Sky” with Tom Cruise the other day for the first time. I got so confused watching the whole thing and then I realized it was one of my favorite movies. And “American Psycho” — I’m weird.

WWD: Your cover of Drake’s “Headlines” was viewed by millions. Do you have any plans to work with him?
J.S.: I have met him and he’s interested in hearing what I’m doing. He just followed me on Instagram for the first time so he’s watching. I was looking through my comments, and everybody was like, “Oh my God, Drake followed you! Drake followed you.” I was like, “Finally! I was wondering when he was going to start following me.” But I’m really excited and hopefully I will get to play him some things off my new project. He’s dropping his album [“Views From the 6” later this month] so I’m pretty sure he’s really busy.

WWD: Haven’t you worked with Tommy Hilfiger?
J.S.: Yes, Tommy, he’s really, really dope. I did their 30th anniversary in Brazil and I got to go to their show during fashion week. He’s really, really cool. I would love to work with him again. Right now I’m just really focused on my music and getting my project done. But obviously if they call I will do anything. They have supported me a lot.

WWD: What’s your fashion sense?
J.S.: I love to be comfortable and that’s kind of hard. You have to fit into these tiny outfits [tightening the waist of her printed DVF jumpsuit for effect] and these tiny shoes. I like to wear things that are funky, cool, very chill, very chic. I’ve been drawing inspiration from a lot of Nineties Naomi [Campbell] and also Foxy Brown. That’s the focus for me and my stylist Micah and Wayman. They style Serayah and a bunch of other artists.

WWD: Which designers do you like?
J.S.: I like Acne Studios. Alexander Wang is really, really comfortable. I’ve loved them, since before I could afford it. Let’s see, I just threw away a lot of things from my closet. I’m really into street style when I’m not doing events like this. I wear a lot of Supreme, Palace and skateboard attire because I hang out with a lot of boys. Being from New York City, I hung out in SoHo and the Lower East Side. I wear Raf Simons sneakers. I’m more of the sneakers and comfortable clothes kind of girl. But obviously you have to get dressed up to come to some things.