Williamsburg continues to have an underground scene, literally. 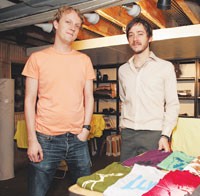 NEW YORK — Williamsburg continues to have an underground scene, literally.

Take friends Paul Marlow and Matthew Sandager, for instance. The duo behind Kadorable, the T-shirt subscription service that has quietly been gathering a fan base with fashion types, works out of a hidden cellar below a Williamsburg, Brooklyn, sewing factory, where it hand-presses cool prints onto T-shirts, then dries them on clothing racks and sends them out to subscribers each month.

“We used to say we loved jeans and sneakers and always had a great version of those, but we didn’t have any great T-shirts to go with them,” Sandager said. “So we decided to make our own.”

The duo creates a new T-shirt motif each month, which is limited to the collection’s subscribers, who pay $145 for a subscription of five monthly T-shirts. The idea for the subscription service came to them when a friend who saw one of the T-shirts liked them so much that he preordered and paid for five on the spot.

“We call them ‘five issues.’ It’s like a magazine,” Sandager said. “You don’t know what’s on the cover until you get it.”

They draw their inspiration from art, music and general graphics, ranging from the artwork of Ed Ruscha and David Wojnarowicz to general photos of airplanes or surfers. The latest ‘issue,’ for instance, is a yellow T-shirt with a brown digital print that is inspired by the duo’s love of the “quickly diminishing analogue world and, well, coffee,” Marlow said. It was sent out earlier this month.

The company currently has around 100 subscribers, from Los Angeles to Amsterdam and Ghana. Tuleh’s Bryan Bradley was recently given a subscription as a gift by a friend. “It’s kind of fun when they arrive, and due to my advanced stages of dementia, I always forget that they’re coming,” Bradley said. “The fit is great, the colors are right on.”

Marlow and Sandager also wholesale several T-shirt designs to stores such as Butter and Pullover in New York, Motley in Boston, Atmosphere and Uncle Jer’s in Los Angeles, Hejfina in Chicago and Kuhlman’s and Okok in Seattle. A T-shirt wholesales for $19, with a suggested retail price of $38. Sandager said they’re currently looking for a manufacturer to help them with wholesale production.

The plan is to keep the subscription-based T-shirts handmade in their cellar, which resembles the type of place where one would expect to find an illegal underground jamming club or a pirate radio station. It features dark wood-paneled walls, racks of LPs and stylish vintage furniture, and there is a constant noise from the sewing machines making hotel linens above.

The T-shirts are just one of several projects the two are involved in. Marlow, a Colorado native, currently works at Marc Jacobs in product development for the Marc by Marc Jacobs collection. He also has had freelance stints designing for Original Penguin and Tory by TRB. Sandager, meanwhile, hails from Minnesota and is a freelance photographer and actor. They have even created a band called The Mockers. Asked to describe the band’s music style, Marlow would only say, “It’s messy.”

“We even had a deal for a single in Germany, but we didn’t deliver on time,” Sandager said.

For fun, the designers created an imaginary tour T-shirt featuring a printed image of the two performing. Its back is printed with dozens of tour dates and locations. But these aren’t just random dates and towns: Marlow and Sandager composed their tour itinerary by taking subscribers’ birthdays and birthplaces.

How did the duo come up with the name for the line? “It’s the bastardization of language,” Marlow quipped, recalling a night out with a friend pretending to speak French. “Everything was ‘Que adorable.'”