After a seven-year hiatus, Gemma Kahng has quietly stepped back into business on her own. 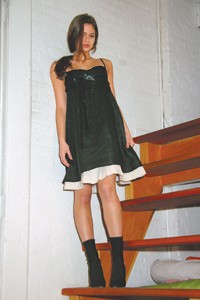 NEW YORK — After a seven-year hiatus, Gemma Kahng has quietly stepped back into business on her own.

But instead of planting herself on Seventh Avenue along with her competitors, Kahng prefers the wide berth she has in a loft at 224 Centre Street here.

Robert Longo and Mario Sorrenti are among her neighbors in the 1848 brownstone, which initially was known as the Odd Fellows Hall. In 1999, Kahng left 550 Seventh Avenue to move downtown, after deciding she needed to downsize, reorganize and stop producing her signature collection for a while. Around that time, she folded her signature line and at Joan Kaner’s request developed exclusive made-to-measure eveningwear for Neiman Marcus. Now Kahng is trying to make a fresh start with her first signature collection in years.

“Everyone remembers me for my suits with gold buttons and bows. It has taken so long to forget about them,” she said with a laugh.

To ease the process along, Kahng will stage a fashion show on Feb. 5 at 7 p.m. at Estonian House, at 243 East 34th Street, a town house she found by dropping by a friend’s band practice in the basement. This will be the first time the designer, a graduate of the Art Institute of Chicago, has sent models down the catwalk in nearly 10 years.

At the height of her career in the mid-Nineties, Kahng was selling her power suits to nearly 100 stores and had opened a boutique in Hong Kong and another in Taipei, Taiwan. Then the financial demands of running a business got the best of her.

“My business was flourishing. I’m not a businesswoman, but I thought I could do everything myself,” she said. “Things got a little sloppy here and there, and there’s no room for mistakes.”

For the spring launch of her 40-piece collection, Kahng is counting on outside help, including some from her ex-husband, Charles Chang Lima, to handle the business side of things. In hindsight, the break she took from running her own business gave her the chance “to re-center my image and develop a new mood — that doesn’t happen overnight,” she said.

What she has come up with is “hard romantic” pieces that are always “a little glamorous and a little bohemian.” Four stores have picked up the collection in the U.S. and several others are eager to see if her new look will remain consistent in the fall collection, she said. The line is also being sold at L’Apartment, a Tokyo store she found through the Japanese trading company Marubeni.

All in all, Kahng prefers to embrace the Japanese idea of wabi-sabi, which she described as “a philosophy appreciating beauty in something that is not perfect. I love that kind of feeling. But American people don’t always understand it.”