Norma Kamali, who made exclusives for Spiegel Catalog 20 years ago, has designed a line for the direct merchant called Norma Kamali Timeless. 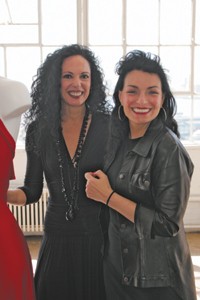 In the mid-Eighties, Kamali produced exclusive pieces for the Spiegel catalogue, which were so successful the company even spun off a stand-alone catalogue just for the designer and photographed by the late Herb Ritts.

Now, two decades later, Kamali has come full circle. She has designed an exclusive collection of 17 jersey looks for Spiegel Catalog called “Norma Kamali Timeless.” The collection will launch with a six-page opening spread in the retailer’s spring catalogue, which will reach more than two million homes in mid-January. The partnership will catapult Kamali’s fashion aesthetic to customers who wouldn’t necessarily get the chance to ever see or find one of her designs.

Fashion pundit and Kamali acquaintance Lauren Ezersky suggested the deal to Geralynn Madonna, president and chief executive officer of Spiegel Catalog and Newport News, who wasted no time and immediately picked up the phone to call Kamali.

“I thought, ‘I don’t know what [Spiegel] looks like now,’ and they sent me these books,” Kamali said on Friday at the shoot for the company’s catalogue. “I couldn’t believe the photographs, the quality, the clothes. I thought, ‘I’d love to meet with them.'”

Madonna said Kamali has been one of her favorite designers since the mid-Seventies, and her wardrobe included Kamali’s famous bathrobe coat with shoulder pads, a jersey button front dress and a long black jersey skirt, among others. “I used to save my paychecks to buy these outfits,” Madonna said.

She and scores of other women won’t have to save with the Norma Kamali Timeless collection. Typically, it will retail from $39 to $89, though swimwear is around $19.

“I love the way she understands what women want,” Madonna added. “It’s versatile, affordable and packable. She has been the inspiration for many designers over the years, and it’s her time again to get out there and say, ‘This is my collection.'”

The move also underscores Spiegel’s new outlook. The catalogue underwent a total makeover last year, with a repositioned catalogue featuring contributors such as stylist Wayne Scot Lukas and model Lauren Hutton, as well as exclusive designs by James Coviello and jewelry designer Wells Jenkins. Spiegel continues to pursue upscale designers for collaborations that would bring their designs to a wider audience.

“With the positioning of Spiegel, we want to create a way for all of our customers to get the designs of these great designers at our prices,” said Madonna.

The Norma Kamali Timeless collection centers around convertible jersey pieces that can be styled in multiple ways and convert from one thing into something else altogether.

“You have the option of changing the way you wear it through those trends,” Kamali said. “You can also get pregnant and wear them. You can wear them short and sexy and cute and sweet, or you can wear them to work and be demure.”

For instance, the “all-in-one mini” is a top with a wide neck that can turn into a miniskirt with the sleeves serving as a belt fastening. The “all-in-one dress,” meanwhile, can be worn as a top, a dress with an asymmetrical neckline or a halter dress with the sleeves serving as the halter. The “convertible tie-waist skirt” also works as a skirt or a strapless or halter dress.

“After 35 years of doing this, you really have the right perspective on fashion,” Kamali said. “Trends are fun, they are the lightning rod, but when it comes to gathering a wardrobe for yourself, there are pieces that turn out to be favorite pieces. You end up with your favorite jean and favorite shoes, and over time, those favorites are still good and you want to have more of them. You will realize it’s a timeless piece.”

The collection also includes such looks as V-neck Ts, hooded jackets, shrugs, off-the-shoulder ruched tops, drawstring pants and racerback tops. It is available in deep red and black, and some pieces are offered in a black, red and white stripe.

Spiegel’s Web site will feature an informational video with Kamali explaining the different ways to wear each look.

This is a long-term partnership, and Madonna said that possibilities to build on the launch are “endless.” “For fall ’06, we are planning to expand the collection with a few more pieces and add more colors and sizes,” Madonna said. “Once we get it started, I’d also like to go to an XXL and also petite.”

Madonna added the line has the potential to do more than $10 million in sales in its first season.

Kamali has been busy with projects recently: she also teamed up with activewear firm Jacques Moret, which holds the master license for Everlast, to launch a cobranded Norma Kamali and Everlast sportswear collection for spring. “I really didn’t orchestrate any of this,” she said of the recent flurry of collaborations. “I decided to go with the flow. My instinct was, ‘This feels right, I am going to go with it,’ and they just happened at the same time.”

It wasn’t the only coincidence that came Kamali’s way. Last Thursday, a day before the shoot, she received a letter from a customer that included tear sheets from Spiegel’s catalogue in the Eighties featuring her pieces.

“The person said, ‘I was going through my attic, and I found these pictures. I had bought these pieces through Spiegel,'” Kamali noted. “Is that not the weirdest thing? Out of all these years, why yesterday?”