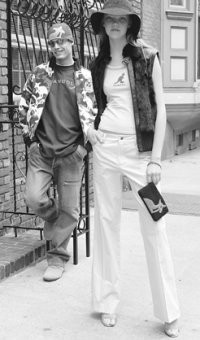 For more than 60 years, the London-based brand has been known primarily for its array of trendy hats, made famous by such celebrities as LL Cool J, Samuel L. Jackson, Eve and Jennifer Lopez. Now, the junior customer can dress in Kangol from head to toe with sportswear, bags and eyewear. And boys can have it, too, as the company will launch a young men’s sportswear line, bags and eyewear at the same time.

Licensed in the U.S. to Chesterfield Manufacturing, the new sportswear line is planned for a soft launch at retail in April. The first official line of Kangol sportswear will launch in the fall, just in time for back to school. It will consist of kitschy printed T-shirts, short skirts, pants, sweaters and outerwear wholesaling between $10 and $250. Bollman Hat Co. will continue to manufacture the brand’s signature hats in the U.S. under license and will take on the bags and eyewear collections as well.

Theresa Scott has been named president at Chesterfield Manufacturing, where she will oversee the Kangol apparel lines in the U.S. Scott joined the company from Sean John, where she was director of sales since its launch in 1998.

“There is such an opportunity in junior apparel,” Scott said. “This is a true sportswear collection that the coolest of the coolest girls will want to wear. There are already so many girls out there wearing the hats and they have been asking for the clothes for quite some time now.”

Scott said the company plans to open some freestanding Kangol stores in 2004, the first being in downtown Manhattan, as well as in-store shops at major department stores. Although the lease has yet to be finalized, in June, Kangol will have its own showroom on Broadway in the Garment District. She said she expects $15 million in first-year sales for the junior line.

According to the company, the apparel, bag and eyewear collections will stay true to the eclectic look of Kangol by pulling inspiration from three eras of its history. The traditional look of the late Thirties, retro feel of the Eighties and modern vibe of the current year are combined as the inspiration for each piece. These three eras are further reflected in the brand’s logo “38.83.03,” which will be used on the label throughout the lines. The numbers represent significant years in Kangol’s history: 1938 was its founding year; 1983 was when 16-year-old rapper LL Cool J wore a Bermuda hat, sparking the Kangol trend in the U.S., and 2003, the current year. The last number will change with each new year.

To celebrate the launch, the company is planning an event in August at the Bronx Zoo near the kangaroo cage, of course.