An internship at Fendi, a breakup with Nike and a billion-dollar partnership with Adidas are just a few parts of West's fashion journey.

Kanye West on stage at the Fast Company Innovation Festival.

Mascotte, Pastelle, Air Yeezy, Yeezy Season. Kanye West has shown since the start of his music career that he is very interested in fashion design.

West forced his way into the industry in 2004 and again in 2011, but it was his proposition in 2015 for Yeezy Season 1 with Adidas that shifted the conversation and left a mark on the industry. And with a growing sneaker empire reported to be worth more than $1 billion, it appears that his long journey is far from over. West opens his 2013 album “Yeezus” with “Yeezy season approaching” — and it may have finally come.

In his youth, West discovered his love for music production through the TurboGrafx-16 gaming console and was inspired to produce music. He would also get into trouble in the classroom for sketching Air Jordan sneakers (he has also said he had received scholarships for art schools at a young age). One path led to West working with Jay Z on a number of albums, and the other path led him to Nike.

West’s first foray in fashion began at Nike in the early Aughts when designer Christopher Bevans, who had previously worked with West on merchandise for the artist’s first album “The College Dropout,” joined the Beaverton, Ore.-based company and suggested they watch West’s career closely. The two partnered on an Air Max 180 sneaker made exclusively for West’s team.

Around this time, the rapper and music producer had plans to launch a line called Mascotte by Kanye West under Rocawear, the name being a different spelling of the word “mascot” in reference to the bear mascot character that appeared on “The College Dropout” album cover and a number of West’s music videos. Samples of Mascotte exist in the world, but the collection was never produced.

Following Mascotte was Pastelle, a streetwear line that was buzzing due to West’s lyrics about the collection in his songs, including “Graduation” single “Stronger,” and the artist would wear sample pieces in performances like varsity jackets at the American Music Awards and a jacket and sweatshirt on “Saturday Night Live.” 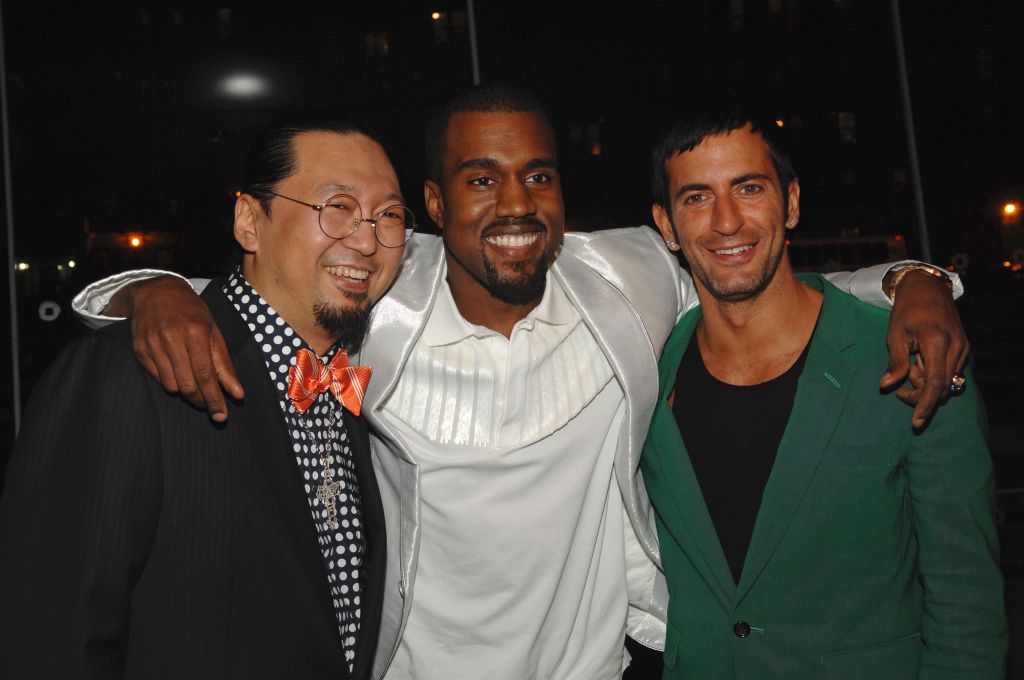 West also in 2008 unveiled his first Nike Air Yeezy sneaker in a 2008 Grammys performance of “Stronger and Hey Mama,” a tribute to his mother, Donda West, who had died a few months before. The high-top sneaker launched in 2009 in two colorways and quickly sold out.

The artist was working behind the scenes in 2009, shadowing then-creative director Patrick Robinson at Gap Inc., where West was rumored to begin designing for the company. Robinson went on the record saying West was not his “intern.” He also interned at Fendi along with Virgil Abloh, but did not specify for men’s wear or women’s wear. Karl Lagerfeld later photographed West for Vman in 2011 and included the artist in Chanel’s “Little Black Jacket” exhibition.

The artist would lament years later about his ideas, saying that he brought the leather jogging pant to Fendi, a style that would become trendy in the early 2010s. The internship also aligned with the end of Pastelle, which did not go to market. West revived the brand in 2016 with Ian Connor, one of West’s muses and partners, at the helm.

West would step out on his own, debuting an eponymous collection in Paris in October 2011, which WWD had described as “neither triumph nor train wreck,” adding, “It had the earnest veneer of a beginner, which was sort of endearing.” The following day, he said, “Every designer works with a team, it’s just different for me because I’m a celebrity. I’ve learned so much even in one day.” A follow-up collection for fall 2012 was also shown in Paris, and but the project would soon end.

The next year saw the launch of the highly anticipated Nike Air Yeezy 2 sneaker, which at that point had only been seen on West and his friends and peers. It was also the final collaboration between West and Nike, a partnership that would end in public.

West went on several concert rants and interviews in 2013, making claims that he was a modern-day Shakespeare and Walt Disney, comparing himself to Steve Jobs, and demanding investments from Google for his ideas. He also admitted that he was in debt. Nike Inc. took the brunt of West’s firestorm as he said that he was not receiving royalties in his deal with the sportswear company because he wasn’t an athlete. He also spoke of being marginalized and forced to work like he was only a rapper and not a creative, and being forced to only work on T-shirts. This seemed random for casual and loyal fans of his music, but in 2010 he made similar remarks during a speech he gave for the Accessories Council’s annual ACE Awards.

West said, “Why, if someone is good in one field, can they not be accepted or given the slightest opportunity to express and be creative in other fields?”

Jean Touitou of A.P.C. gave West a shot in 2013, collaborating with the artist on two collections that can be best described as a “Yeezus-era Kanye” collection, because of the offering matching West’s style at that period of time. The first collection offered a short-sleeved gray hoodie, a $120 T-shirt and unique-fitting jeans dubbed the “Kanye fit,” among other styles. Reports indicated that the collections sold out quickly. Touitou described Kanye as sincere and appreciated his efforts in fashion.

West said about the collaboration in 2014, “I’ve been showing my ideas for 10 years on the front row of the runways.…Hip-hop is an expression of clothing. Some people don’t understand that. I’m really happy with this [collaboration] because I’m starting to be able to express myself.”

Adidas also understood West’s sentiment, and entered into a partnership with the musician. West said during a radio interview that he had signed with Adidas, and thus, Yeezy Season was born. 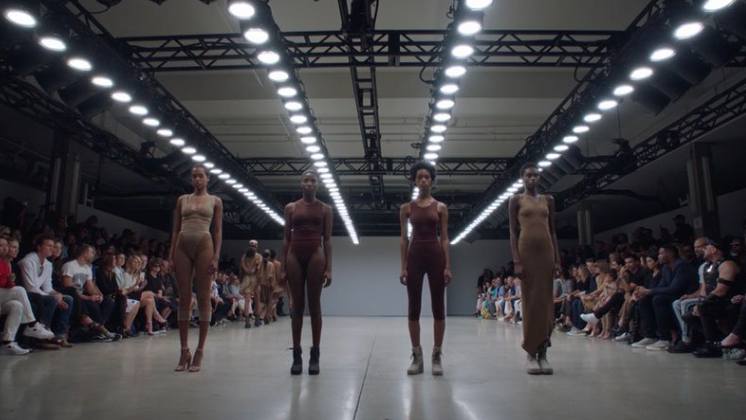 Yeezy Season 1 was a dystopian vision partly inspired by the 2011 London riots. Models such as Luka Sabbat, West’s sister-in-law Kylie Jenner, and his muse, Ian Connor, stood in a row and stepped forward under a glowing light to show oversize knits, formfitting body suits, leggings and bicycle shorts, as well as the first Yeezy footwear offering.

Many retailers — including Barneys New York, Mr Porter, The Webster and more — reported long lines for the launch of Yeezy Season 1 and a quick sell-through of the collection footwear composed of the 350 and 750 sneakers and 950 boots. But pieces from the high-priced apparel remained in stores with markdowns. Adidas would step back from producing the Yeezy Season apparel, but remained a partner on the footwear. The anticipated Season 2 show was also held in New York City, with many of the looks appearing similar to the previous season.

West went big for Yeezy Season 3, unveiling a massive collection at Madison Square Garden in February 2016, which doubled as a listening party for his seventh album “The Life of Pablo.” West would also merchandise that, saying “I feel like Pablo” at the arena, and separately at a pop-up in March 2016. The rapper-slash-designer said on Twitter that the pop-up made $1 million in two days. Also, in 2016, Adidas and West would enter a partnership that included a new range of apparel, accessories and footwear.

West also promised expanded distribution so that everyone who wanted a pair of Yeezy sneakers could get a pair. The footwear line now consists of women’s heels, crepe sole boots, the Adidas Powerphase sneaker, two versions of the 700 trainer, a low- and high-top version of the 500, slides, a basketball sneaker and a new style, 451, that West wore in Paris in March 2020. Reports projected that his Adidas line would cross $1 billion in sales in 2019.

Things took a turn for West with Yeezy Season 4. The women’s fashion show was held at Roosevelt Island in Manhattan in September 2016 and ran into a number of logistical issues, such as a two-hour wait and health concerns due to the hot weather. Bruce Pask of Bergdorf Goodman escorted a tired model down the runway while others fainted. Model Amina Blue, who had modeled for the Yeezy Season shows, collections and Yeezy Season 2 Zine, removed her shoes to walk the show.

The following show, Yeezy Season 5, at Pier 59 was more subdued than the previous ones possibly due to learning from the scheduling and logistical conflicts of Season 4, or West’s hospitalization for exhaustion in November 2016. Unlike the previous four Yeezy Season shows, he did not appear for Season 5.

Yeezy Season 6 and Season 7 had a new approach. Kim Kardashian-West modeled the collection on Instagram, and her friends and peers like Paris Hilton and Kristen Noel Crawley followed suit, mimicking her looks. Season 7 was rumored and later reported to be canceled, but Kardashian-West confirmed that she wore looks from the collection in her Instagram photos in Tokyo. 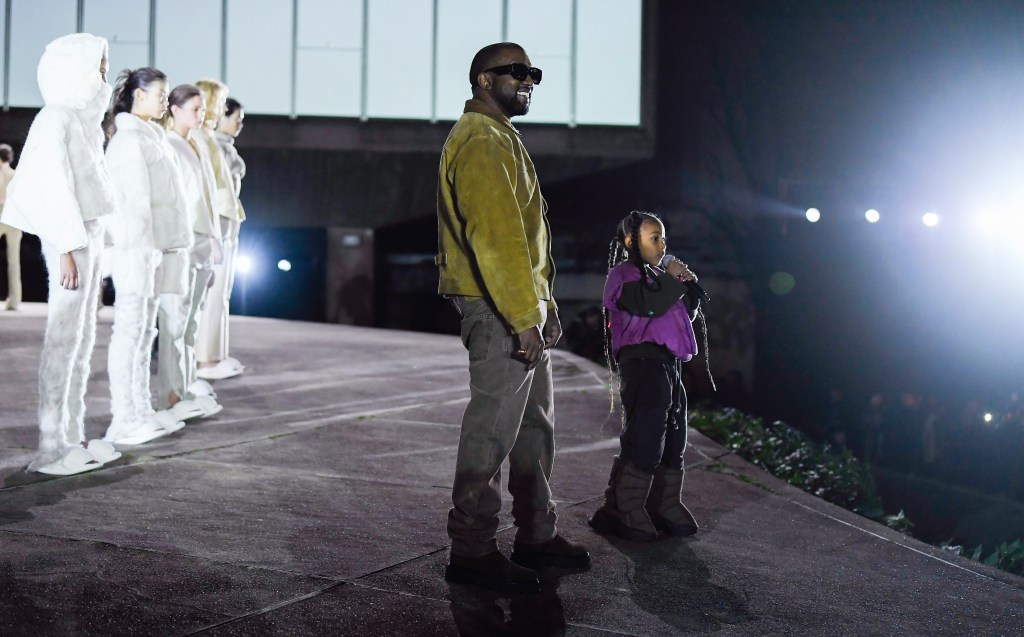 Over a full year later, West delivered Yeezy Season 8 in Paris on March 2, but first, he showed he was in the city by holding his first Sunday Service gathering in Paris that Sunday. The artist had turned his life to Christianity in 2019, and retired from secular music. He initially held his Sunday Service music events for a private and intimate audience, but later took the show on the road to Coachella, cities such as New York City and Chicago, and now Paris.

On Monday evening, West presented an evolution of his women’s offering that included cropped tops and parkas, boots and slippers, and, of course, leggings. The collection was in-line with signature Yeezy Season-isms and introduced new details and touches as evidence of growth. WWD said West swore off doing merch a few months ago, saying there’s a difference between producing merchandise and fashion design. He remarked how he fought to not be forced to only do T-shirts — but fell into only doing T-shirts.

He closed the show with his six-year-old daughter, North, who sang a remix of What I Do by four-year-old internet singer ZaZa. Like father, like daughter, and time will tell if she embarks on her own fashion journey in the future.