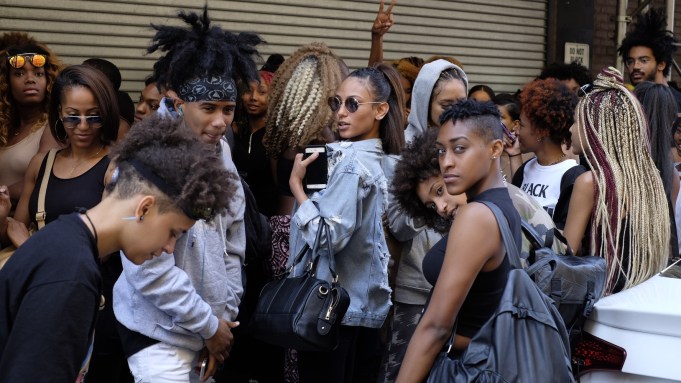 If Kanye West builds it, they will come — even if he’s asking would-be models to wait in line on a holiday weekend to try out for his New York Fashion Week show.

West, whose Yeezy show is set to take place on Wednesday — details on time and place have been kept mum so far — put out the call on Twitter Saturday afternoon for “multiracial models only” without makeup. The casting is taking place at Jack Studio in New York from 11 a.m. to 5 p.m., and as of 11:15 a.m. upward of 500 models lined up for a chance at their big break.

West, of late, has inspired thousands of people to wait in line. Just last month, thousands of fans queued up around the world to buy from his Pablo pop-up shops.

WWD spoke with several of the women who lined up and what being blessed by Yeezy himself could do for their careers.

Jada Berthoumieux, 16, came from Teaneck, N.J., with her mother at 9 a.m. She has never modeled before. “It would mean everything [to be in this show],” she said. “I’ve been wanting to model for a really long time now and it’s just exposure. I’m just really excited right now.”

Casey Waller, 18, an actress and part-time model, was drawn in by “The empire of Kanye West,” she said. “He’s so different from everyone else. I just think this is such an interesting show. I feel like any girl could do it, whether you’re six feet tall size zero, or size four. There’s just an opportunity with him.”

Saima Lulu missed West’s open call last season. “I was on a work shift from the Hamptons, that’s why I have all my suitcases with me,” she said. “What brought me here was that the past three seasons  have been to-die-for. I tried to come last season, but I came too late, so this is my second try.”