"I was looking at gymnastic leotards, with their gestural cutouts that are usually done in flashy rhinestones, and thinking of doing that in a chic way. And I was really focused on what's wearable," said former Yeezy designer Maisie Schloss of her new project. 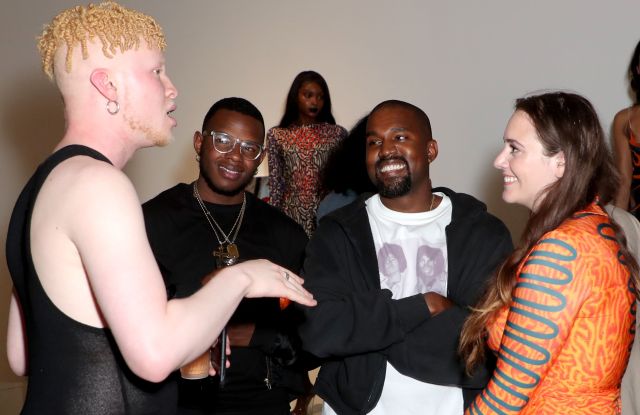 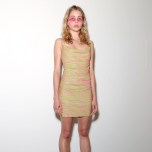 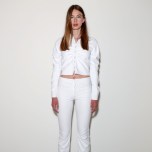 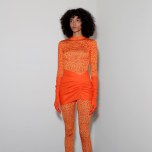 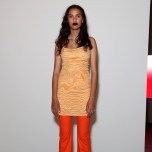 Could Kanye West be fashion’s next star-maker?

On Wednesday night at the Night Gallery in L.A.’s uber-cool Arts District, he looked at ease in the role during the debut presentation of Maisie Wilen, an artful-yet-wearable collection by his former Yeezy women’s wear designer. Created by Parsons grad and Chicago native Maisie Schloss, it’s the first project that West is supporting as part of a new plan to incubate young fashion talent. And while he declined interviews, he spent nearly two hours at the low-key, friends-and-family event, stopping to shake hands and chat.

Schloss’ promising debut exhibited Yeezy DNA in its body-conscious silhouettes, including leggings and leotards the designer said were inspired by rhythmic gymnastics. But the vivid colors, warped prints and unusual materials (embossed vinyl upholstery fabric, being one) were all Schloss’ vision. “I told her that’s my favorite thing,” West said when asked about the materials, which extended to over-the-knee slime boots dipped in goo-green Latex. 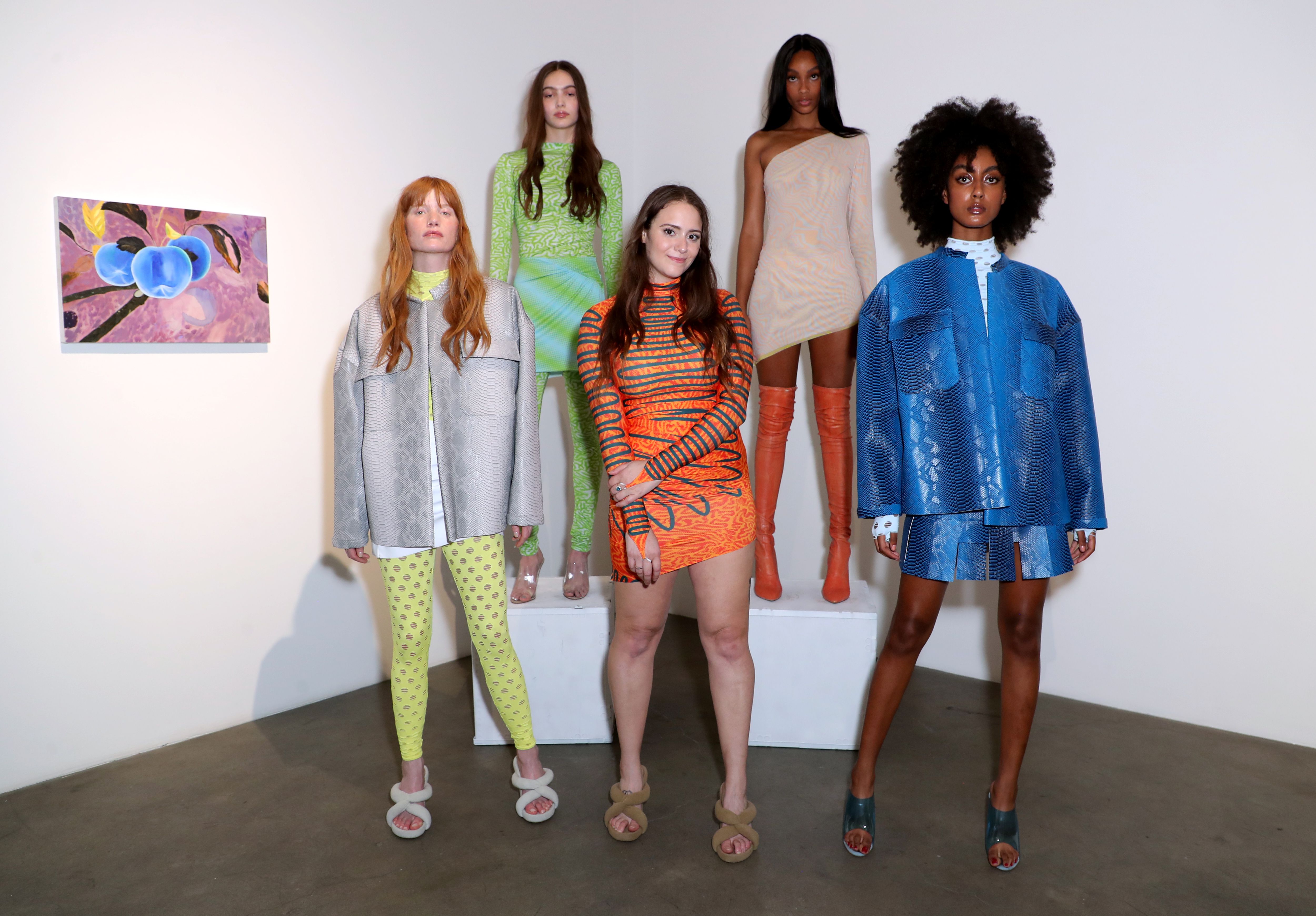 Maisie Schloss and models in her designs.  Chelsea Lauren/WWD/Shutterstock

The static presentation had models standing in front of the “futuristic goth fantasy” paintings of Chicago artist Paul Heyer, which were the perfect foil for the designer’s techno-feminine clothes, including a slip-dress in a dynamic-looking orange and teal flame print that was a collection star, and a stretchy, ruched-front jacket in a lavender-and-gray abstract snake print worn over textured leggings with the aforementioned slime boots for the creative class’ answer to a suit. An oversize trucker jacket and miniskirt in electric-blue embossed car upholstery vinyl looked luxurious and edgy, while bringing to mind L.A.’s history as a hub of auto design. And an orange-wave minidress over orange pants and Yeezy sneakers was arty, casual cool at its best, proving that Schloss is one to watch.

“My main two visual reference points were rhythmic gymnastics and robotics. Aesthetically, I’m very drawn to them,” said the designer, who will show the made-in-L.A., contemporary-category collection, priced $100 to $1000, to the industry in Paris in a few weeks. “But conceptually and process-wise it’s a great parallel. I tend to work methodically and systematically and everything is in precise order, but I make things that look very playful and lighthearted. 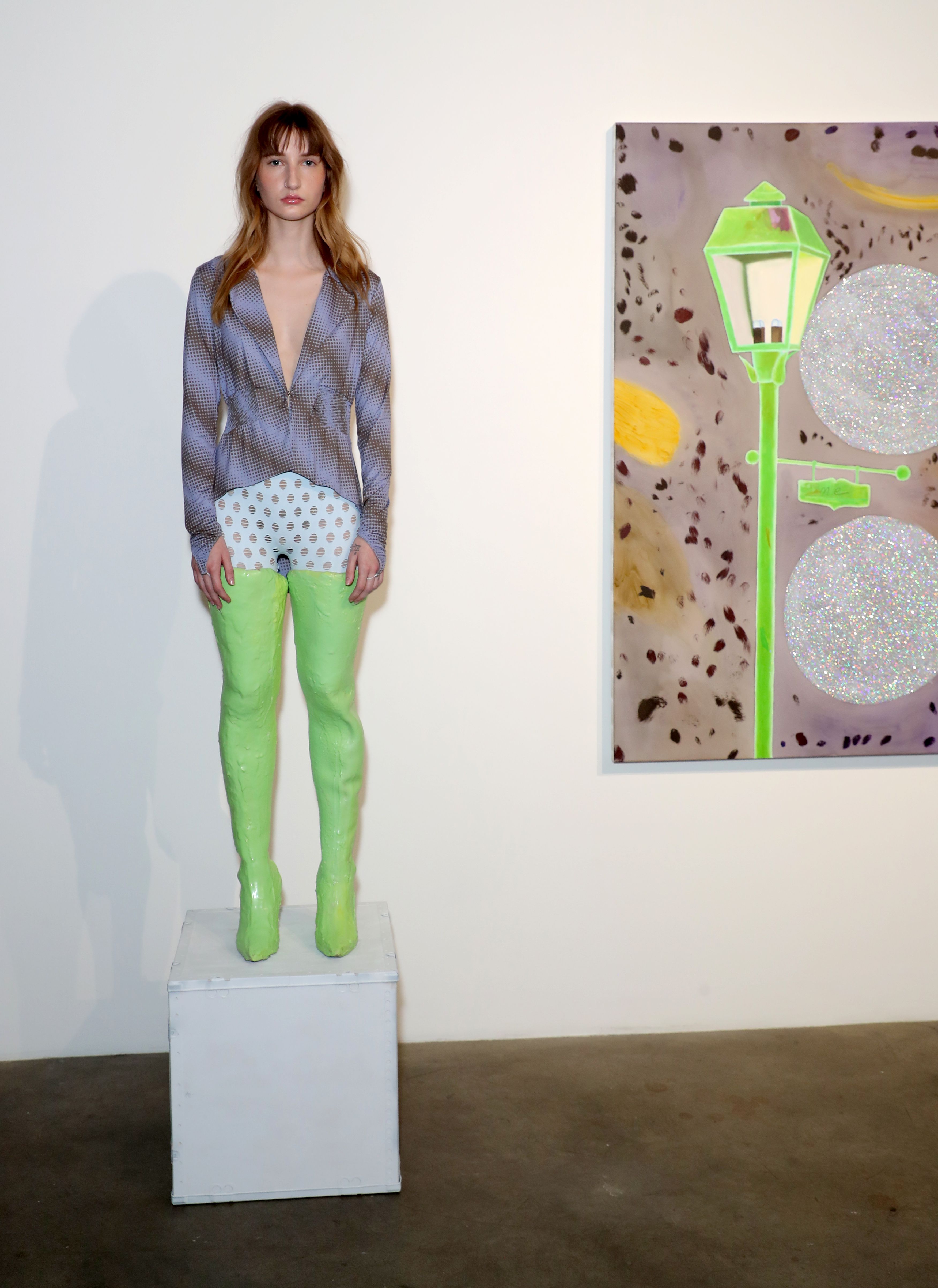 “I was looking at gymnastic leotards, with their gestural cutouts that are usually done in flashy rhinestones, and thinking of doing that in a chic way. I was really focused on what’s wearable. I want the woman who buys this to get a lot of use out of it. There’s pop to it, but at same time you can wear it a lot places.”

Read More: Goop Is Getting Into the Men’s Apparel Business

Outside over cocktails, FOYs (friends of Yeezy) mixed with artists and designers in a scene that exhibited why L.A.’s Arts District has become a hotbed for fashion, attracting restaurants and retailers including the nearby Dover Street Market.

“She has a really amazing work ethic, whether it’s working for herself or someone else,” designer Zoe Latta said of her young designer friend. 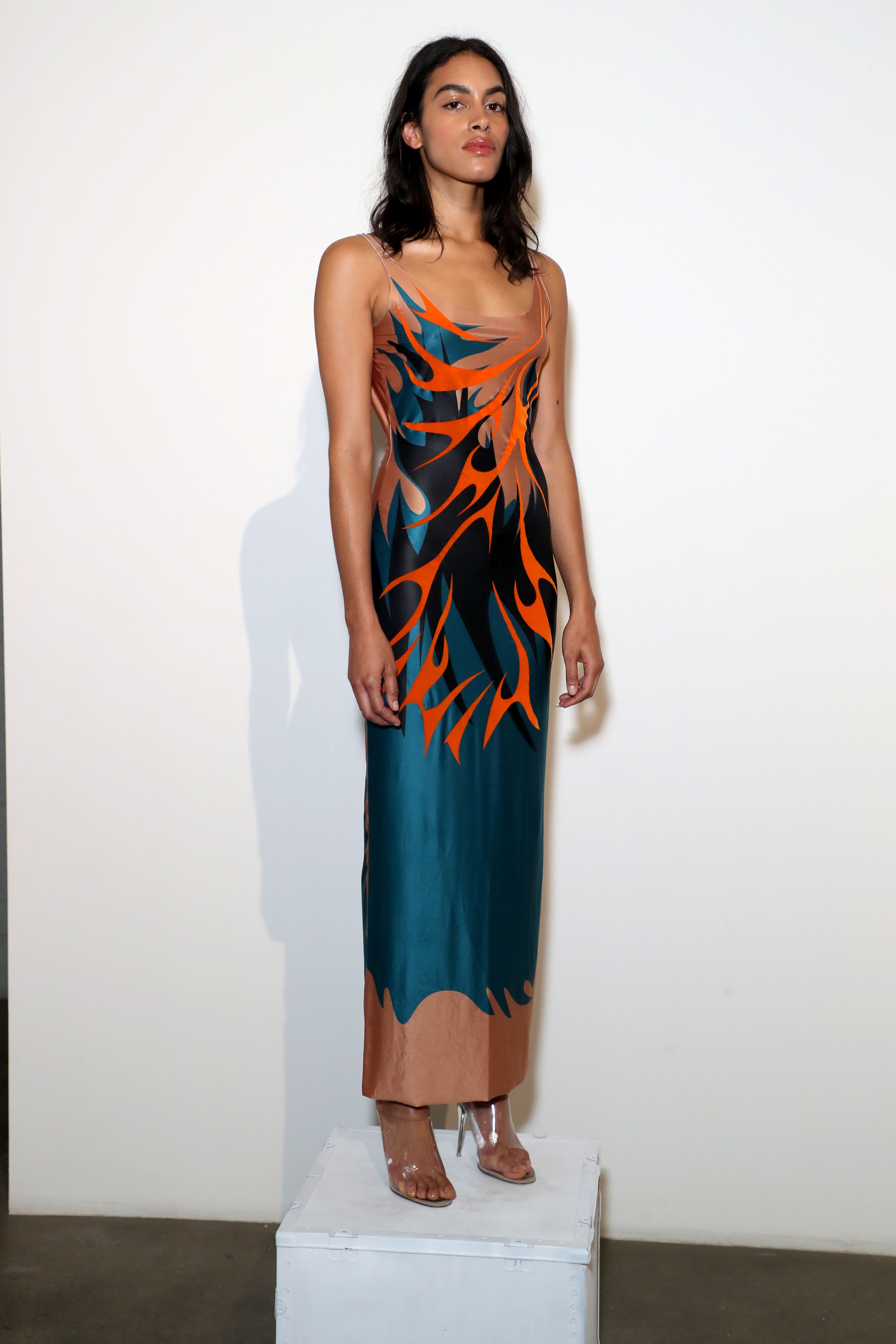 “I was attracted to the L.A. fashion scene because it’s a lot smaller here and I felt that people were embracing kookier projects,” said Schloss, who worked for Kanye for two years and will continue to design her own brand (Wilen is her mother’s maiden name) out of his Yeezy Calabasas, Calif., headquarters. “I come to openings down here all the time,” she said of the Night Gallery, which has been a meeting space for creatives since it opened in the area in 2010. “It’s a great community and is part of why I wanted to have the event here tonight. This gallery always has interesting contemporary art shows and hosts a lot of unusual projects.”

Schloss acknowledged Kanye has already been a mentor. “The variety of creativity he has and projects, and how much vision he has into things, he has music and fashion and will get into smaller side projects he’s suddenly a master in. He’s truly a genius.” As for how it feels to be incubated, if you will, she said, “It’s really an honor…When he approached me about this partnership, I was floored. It was a dream come true.” 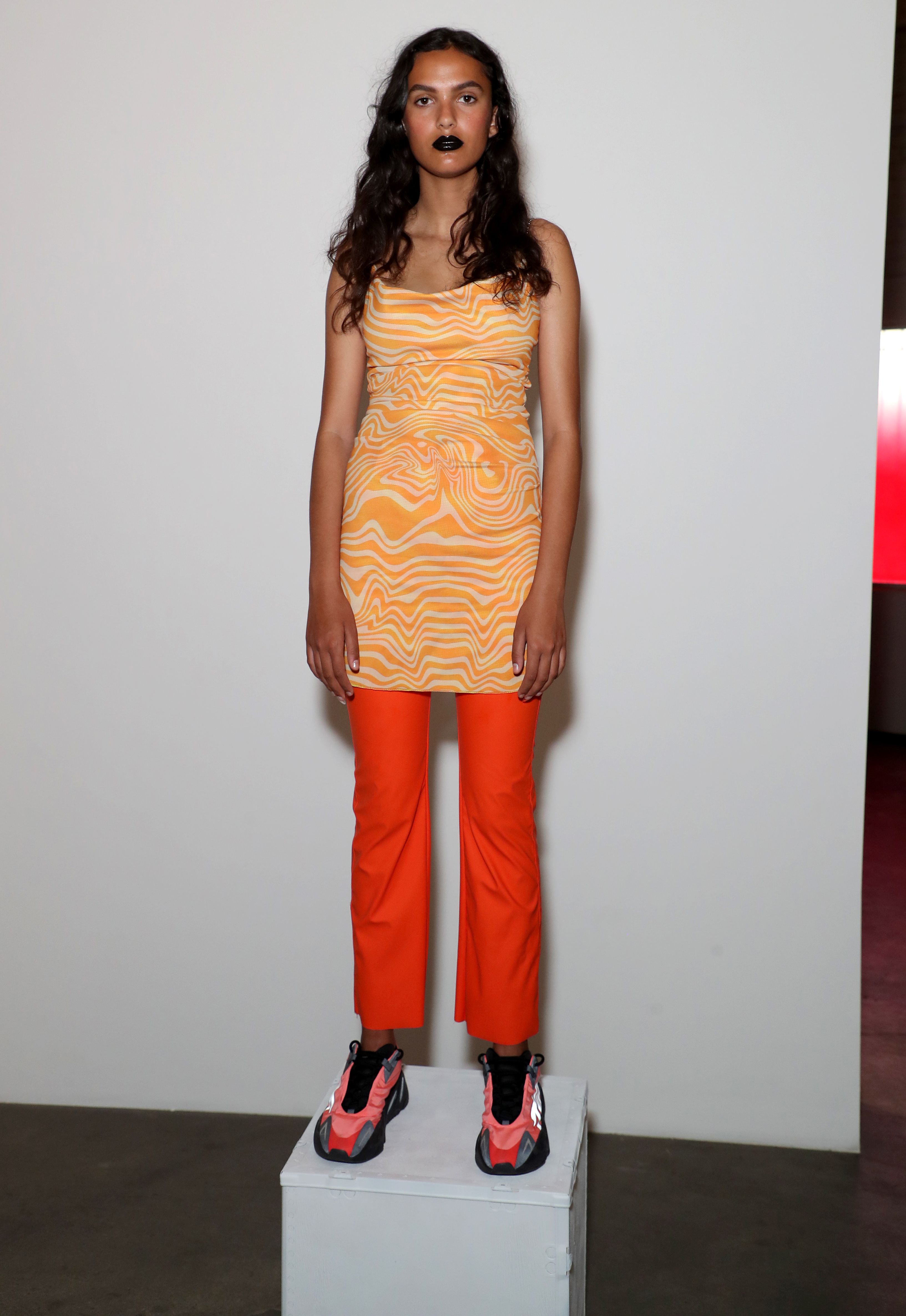