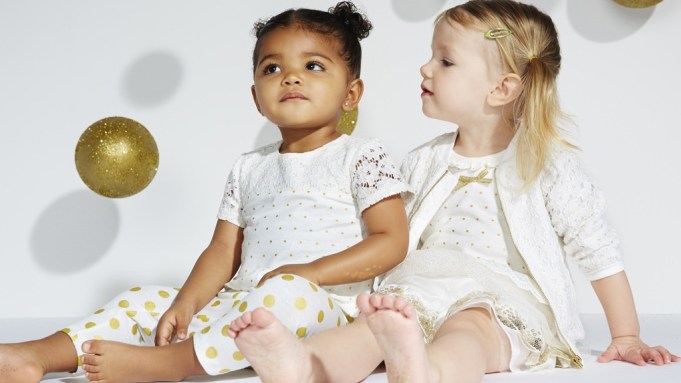 LOS ANGELES — The Kardashian sisters are getting ready to debut their latest baby, Kardashian Kids, a line for girls ages 0 to 24 months that will sell exclusively in Babies ‘R’ Us and online beginning March 15.

“We started this idea when Kourtney was pregnant with Penelope,” said Kim Kardashian of her oldest sister’s second child. “It was mainly Kourtney who was the inspiration, but as I got pregnant, I started to chime in. Until you have your own child, you don’t realize how important it is for fabrics to be extra soft and accessible.”

The 30-piece kids collection is soft to the touch and comprises on-trend details like lace, leatherette, gold embroidery, georgette appliqués and peplums, in shades of cream with a butterfly print and a baby version of the sisters’ favorite animal print. Retail prices range from $14.99 to $29.99.

“Kids has been on the table since the beginning, but we hadn’t gotten to it until now because we’ve been expanding in so many categories and we’re still understanding what the consumer is buying from us,” said Jupi chairman and founder Bruno Schiavi, who is also planning to introduce the line in Babies ‘R’ Us’ retail partners abroad.

With two of the three sisters now moms, their rabid following is looking to them for tot style advice as well. The women have extensive experience with children’s clothing: Their maternal grandmother owned a kids’ shop in La Jolla, Calif., for 30 years where they worked summers, and Kourtney owned a kids’ boutique called Smooch for six years.

“I used to do the buying for the store, and I had no idea what was practical,” said Kourtney. “Now I know what mothers are looking for. And shopping for my kids is way more fun than shopping for myself.”

“It’s more complicated designing baby clothes than you would think,” said Khloé. “A lot of things can get cheesy or cheap-looking really fast. It’s mainly about finding baby-friendly fabrics and things you want to put your child in or give as gifts.”

However, it was less the sisters’ fan following and more the product that caught the eye of Babies ‘R’ Us.

“When I first saw the line last fall, I was blown away. It’s incredibly cute and well designed, yet commercial. We don’t have anything quite like it, and it really fills a niche for us,” said Tom Via, senior vice president, juvenile, at Toys ‘R’ Us U.S.

The retailer plans to merchandise the line in the front of its baby boutique area with dedicated signage in about 190 of its stores and online, where it hopes to market through social media and digital channels. Although Via declined to give sales projections, he said, “I would expect it to be highly successful.”