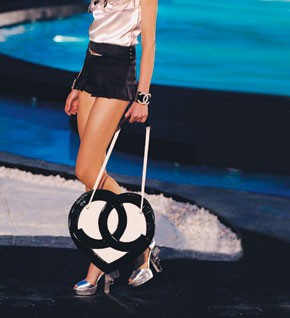 How do you make a real splash for cruise? Just ask Karl Lagerfeld.

He and his Chanel studio hit Miami Beach on Thursday for a poolside production that was worthy of an Esther Williams movie.
?           ??
Inspirations ranged from Brian Jones, the Rolling Stone guitarist who died at 27, to Coco Chanel’s creations for Alain Resnais’ 1960 film, “Last Year at Marienbad.” Naturally, there were plenty of great accessories, like this heart-shaped handbag that incorporates the double-C logo, bold cuff and shoes with gun heels, worn with HotPants.

MIAMI — With a lifeguard perched above the Raleigh pool and double-C logoed life preservers and beach balls scattered throughout, the Chanel cruise extravaganza was ready to kick off on Thursday night.

Those expecting “Miami Vice” pastels or even a touch of “Golden Girls” were in for a surprise, though. Karl Lagerfeld set the mood with an all-black start that was more Paris and New York than some of the world’s sunnier locales. But then cruise is about so much more than just a vacation wardrobe, and few know that better than Lagerfeld himself.

Rather than home in on one specific theme, Lagerfeld went in a few directions in the collection, from sleek black tuxedos to wide jackets and bell-bottom pants, metallic punk blazers, HotPants, plastic embellishments, bows and bow ties galore and the new way of reinterpreting the Chanel logo — inside a heart on dresses and handbags.

“It’s all about proportions, cuts, volumes,” he said, pre-show. “There is not one line that is taken all through the collection. For cruise, you don’t do that. There are many looks and an attitude.”

Lagerfeld gradually softened the palette from black to pale grays, pinks and blues. Along the way, he played with proportions and draped and folded knits to dazzling effect. Several floaty gowns were adorned with feathers — a sly reference, perhaps, to a feathered pastel dress Coco Chanel herself had once created for Delphine Seyrig in “Last Year at Marienbad.”

Lagerfeld, for his part, cited Brian Jones, the drug-addled Rolling Stone who was found dead at the bottom of his pool in 1969, as an inspiration. But besides “the androgyne attitude,” Lagerfeld said, there’s little that’s hippie-dippy about this collection. “I don’t remember the Sixties,” Lagerfeld offered. “I was there, but I don’t remember.”

His memory of Esther Williams movies that he enjoyed as a child is much better — so much so that the show ended with a lineup of synchronized swimmers from the U.S. Olympic team, who jumped into the pool in perfect sequence, their letter-emblazoned swimsuits spelling out Chanel. They did a modern underwater ballet, replete with Chanel bathing caps and double-C nose plugs. Their dance culminated in the group forming the house’s logo, to thunderous applause. It all made quite an impact, as did the post-show “beach party” behind the pool, where Lagerfeld and his friends took in the scene from a cabana.

“I want to take one of these Chanel beach balls, but I think they will notice,” said model Ines Rivero.

Zoe Kravitz, meanwhile, had different ideas. “I kind of want to jump right into the pool,” she said. “I don’t think Chanel would appreciate that, though.”

If that vaguely harkens back to the days of “Scarface” or Sonny Crockett and Ricardo Tubbs, then so be it. “It’s Miami Spice,” Lagerfeld said.