Karl Lagerfeld's dream of designing collections in three international cities is about to become reality with the launch of a signature lifestyle collection. 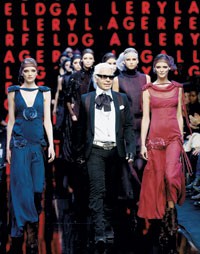 NEW YORK — Karl Lagerfeld’s dream of designing three different collections in three international cities is about to become a reality, thanks to his growing love affair with lower prices.

“My idea was always New York, Paris and Rome,” said Lagerfeld, describing his design roles for Chanel in Paris; Fendi in Rome, and now a brand-new, less expensive line to be called Karl Lagerfeld, based here.

In a joint interview, Lagerfeld and Ann Acierno, president of new business development at Tommy Hilfiger Corp., which owns the Lagerfeld business, outlined plans for the global launch of the new contemporary women’s and men’s lifestyle collection. The line will be introduced in February for fall 2006 retailing and will be priced 50 percent below Lagerfeld Gallery, his designer collection.

“I’m very much into large distribution,” said Lagerfeld, from his expansive new showroom at 601 West 26th Street here. “With haute couture, I proved that I can design the most expensive things, and with H&M, I can do the less expensive things. This will be in the middle of all that.”

Lagerfeld’s wildly successful collection for H&M last fall proved he not only had the ability to design at less expensive price points, but that he also was a household name. The collection featured $19.90 T-shirts with the designer’s silhouette, $49 blouses and $149 wool-cashmere overcoats, and it helped buoy H&M’s fourth-quarter profits by 23.9 percent. At the other end of the spectrum, Lagerfeld took a trip to Tokyo several weeks later, where he inaugurated the opening of the largest Chanel store in the world and was mobbed by fans.

His popularity hasn’t gone unnoticed by the Hilfiger organization.

According to Acierno, the Lagerfeld line will be geared to the contemporary departments of top-tier department and specialty stores. “It will be young and spirited, with denim, sportswear, Ts, tanks and jackets. It will be a full lifestyle assortment,” she said. She explained that women today like to pair an expensive jacket with an inexpensive tank, but have to run from store to store to put a look together. The new line will be housed near such resources as  Marc by Marc Jacobs and Theory and will offer “more variety and breadth.”

Melanie Ward has been named creative director of Karl Lagerfeld and will collaborate with him on the design. Ward, a former Helmut Lang consultant, continues as senior fashion editor of Harper’s Bazaar. “She has a flawless reputation. People like her, respect her, and she’s modern,” said Lagerfeld.

Acierno said the Lagerfeld business will use Hilfiger’s infrastructure “where it makes sense,” such as legal and finance, but won’t be using the same factories or fabrics. She declined to give a first-year sales projection because Hilfiger is in a quiet period before releasing its numbers. However, she said they’re expecting Lagerfeld to be a “large business.”

Hilfiger and Lagerfeld announced their odd pairing back in December, and the industry has been awaiting word on what Hilfiger was planning to do with the business.

Acierno said her first priority was to get through the fall market for the Lagerfeld Gallery designer line, which was shown on the Paris runways to positive reviews, and to lay out a financial plan for the business. They opened several new specialty store accounts, such as Mix in Houston, Razook’s in Greenwich, On Sunset in Los Angeles and Capital in Charlotte, N.C., in addition to continuing the business with Bloomingdale’s. And Lagerfeld shot the Gallery ad campaign featuring Erin Wasson.

“We continue to evolve the Lagerfeld Gallery business,” said Acierno. “The quality’s extraordinary. The details, the number of seams, the fabric, the construction…it’s for someone with a lot of confidence.” The collection is produced in France, but Hilfiger is seeking new factories in Italy and Asia. The Lagerfeld Gallery store in Paris  remains open, but the one in Monaco has closed.

Since signing the deal, Lagerfeld said he and the Hilfiger executives started to get to know each other “to see what everybody could do.”

Although he intimated in December that he didn’t expect to renew his contract with Fendi when it expired, he apparently had a change of heart and signed a new long-term deal last month. “I had to continue with Fendi. There was a clause in my contract that I didn’t see that I had to give them a year’s notice,” he claimed.

Still, Lagerfeld believes he has enough time to devote to his own brands, even though historically, he hasn’t been able to give them much attention.

“I can give more time than ever before. I’m not a business person,” said Lagerfeld, noting that he’s happy to leave all the production, sales and distribution decisions to Acierno and her team. In fact, while Acierno was talking about factories, Lagerfeld said, “This is a subject I want to know nothing about.”

Over the years, Lagerfeld has made numerous attempts at developing a less expensive ready-to-wear line, but with little success. He had a licensing deal with Bidermann Industries USA for Karl Lagerfeld women’s wear and KL by Karl Lagerfeld sportswear in the Eighties, which never really took off and ended in January 1987. That same year, he signed with the German apparel firm Klaus Steilmann GmbH & Co. to manufacture his KL by Karl Lagerfeld sportswear collection, and that deal lasted eight years. In 1995, Lagerfeld signed a five-year agreement with Italy’s Selene SpA for a signature collection, but there were problems with production and delivery. The agreement was discontinued in 1997, the year Lagerfeld bought his name and company back from the former Vendôme division of Compagnie Financière Richemont SA for a symbolic franc. He then signed a line with an undisclosed Italian company for a signature business, Lagerfeld, for spring 2001.

Asked to describe the consumer for whom he’ll now be designing, Lagerfeld declined to put that woman into words.

“A designer proposes, and it’s up to people to find it. I have to design a collection and hope it will be right for the market we’re supposed to be designing for. You propose an image, a vision and a style. Designing is a proposition. I want it to reflect the energy you find in New York.”

Lagerfeld agreed with Acierno that Lagerfeld Gallery shouldn’t become too big. “Karl Lagerfeld is better for today’s lifestyle. It’s meant to be big. Gallery is something intimate,” he said. Although Lagerfeld Gallery has been well received the past few years, Lagerfeld has had difficulty building it into a major business. He said there has been a lot of infighting. “It’s difficult to make a business in France,” he added.

And does he envision a lot of black in the Lagerfeld line?  Lagerfeld turned to his entourage and a visitor, who were all dressed in black, and replied: “Your question is an answer. I have nothing against color, but look at what everyone’s wearing.”

In comparison with Lagerfeld’s collection for H&M, the Karl Lagerfeld line’s “quality and materials will be a few steps up,” said the designer.

One thing he’s certain of is that he doesn’t plan to make personal appearances on behalf of the Karl Lagerfeld line. “That’s not a good thing. You lose the kind of mystery if you show up too much. Personal appearances in the stores are very much the Seventies and Eighties. I don’t see myself as a young, struggling designer. You have to be careful of overexposure. It can play against you.”

Rather, Lagerfeld said he’s a big fan of advertising. “Today, advertising is as important as editorial in magazines. You have the essence and spirit of the line, and you can show the image of the collection.” He will photograph the Karl Lagerfeld ad campaign, as well.

Despite his full plate, Lagerfeld seems eager to take on another big challenge, including establishing a New York home. In fact, Lagerfeld’s love affair with New York appears to be in full bloom.

“I didn’t like the Eighties in New York. Suddenly, the mood is different. It’s the first time I feel at home in New York.” He said he never wanted to have an apartment here and would always go to a hotel, but suddenly, finding a permanent home in Manhattan became a priority. In fact, he recently bought an apartment in Gramercy Park that he’ll move into next year. “The apartment is proof I really wanted to be a part of it,” he said.

Lagerfeld couldn’t say how much time he’ll spend in New York, or in Paris or Rome, for that matter, but he said these days, he can do things through e-mail and can even do fittings via videoconferencing.

He was in New York last week celebrating the ad campaign he photographed for the 1998 vintage of Dom Pérignon and a related art book. Meanwhile, he’s got the Chanel couture show coming up July 7, and will be appearing in a movie, “La Doublure,” by French director Francis Veber. “The couture show is part of the movie. I play myself,” said Lagerfeld. “The director is an old friend of mine.”

Lagerfeld said he enjoys keeping busy with all his assorted projects, whether it’s shooting ad campaigns, photographing for magazines (he was scheduled to shoot Donna Karan and Nicole Richie last week for a magazine), designing Chanel, Fendi or Lagerfeld Gallery, owning a bookstore or being the author of several photography books, “because you always stay in touch with everything.

“It’s a constant dialogue, and you’re always with people,” said Lagerfeld. He said designers can have their points of view, but you have to stay current with the times.

“Fashion is about change, and it suits me perfectly well,” he concluded. “It’s not what you did, but what you will do.”