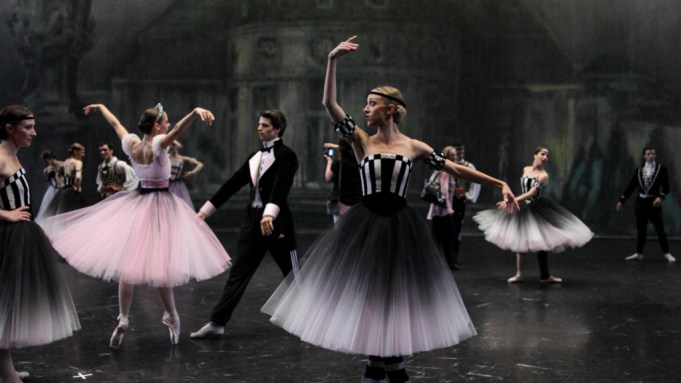 PARIS — The fog of white tulle that veiled the dancer’s slender legs revealed a delicate dégradé, as if stained with soot, echoing the dreamy, hand-smudged backdrop depicting a fantasy castle lost in Mitteleuropa.

Perennial overachiever Karl Lagerfeld outdid himself once again when choreographer Benjamin Millepied asked him to design the costumes and set for “Brahms-Schönberg Quartet” at Opéra Bastille, which is to premiere Saturday for eight performances through July 15.

“He seriously is so thorough, it’s insane,” Millepied said Monday night after a dress rehearsal.

“I have to tell you, I have worked with a lot of designers and he is so thorough, so serious. He did a lot of research, it’s just fantastic,” he added, describing the looks Lagerfeld created for the ballet’s four movements as “so graphic, so beautiful. The way they move. There are some simple ideas that I’ve never seen on tutus and we have the best shop to execute it.”

When he enlisted Lagerfeld for the George Balanchine piece, the designer listened to the music and came back with a stack of sketches, each meticulously detailed with technical instructions.

He draped black ribbons on some tutus — echoing the graphic effect of headbands and armbands on all the female dancers — and delicately embroidered others. In all, he conceived about 100 costumes, with the men wearing white tights, suede waistcoats with grid patterns and short velvet tailcoats.

“It’s a very romantic ballet, a classical ballet, and I knew he had the ability to do something incredible with classical costumes — and I wasn’t wrong,” said Millepied, who last February resigned as the opera’s director of dance and is wrapping up his tenure.

Lagerfeld said he drew upon elements from the Vienna Secession, founded in 1897 by the likes of Gustav Klimt and Josef Hoffmann as a progressive alliance of artists and designers. But his main idea was to juxtapose the 19th-century era of Brahms with the modernity of Schönberg. “A world that was finishing and another one that was beginning,” Lagerfeld said.

The dreamlike castle is a fantasy creation, telegraphing the designer’s knowledge of architecture, as it was not based on an actual building.

A giant curtain of paneled swags is the other main set element, which exhibits the same smoky aspect of the backdrop. Lagerfeld noted that the fabric was painted to achieve the illusion.

The female costumes, with their corseted waists and bare shoulders, have a doll-like quality, energized with graphic stripes and squares, reminiscent of a painting by Hoffmann and Koloman Moser. “It’s inspired by porcelain of the Wiener Werkstätte,” Lagerfeld explained as he took in the rehearsal at Millepied’s elbow.

The designer once had an enviable cache of the rare objects. “I gave them away. I like to collect, I don’t like to own,” he said.

Hearing that, Millepied confessed to a pang of jealousy. “I always wanted to have some Wiener Werkstätte, it was just a little too expensive,” he said with a laugh.

Considered Balanchine’s first abstract ballet and created for the New York State Theater in 1965, “Brahms-Schönberg Quartet” is hinged on Brahm’s piano quartet from 1861 with orchestration by Schoenberg in 1937, modernizing the chamber piece. Lincoln Kirstein, cofounder of New York City Ballet, once said the dance “seem steeped in the apprehension and change permeating the sunset of the Austro-Hungarian monarchy.”