Karl Lagerfeld led a group of models and editors on buses to show his Chanel cruise collection, then headed to Rome for a Fendi store opening. 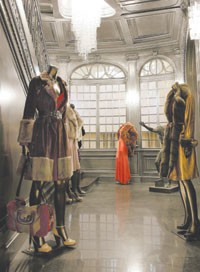 ROME — Boasting undulating stone shelves that float as if they were as lightweight as unlined mink coats, the world’s largest Fendi store will be feted today with a celebrity-packed party and a press conference hosted by LVMH Moet Hennessy Louis Vuitton chief Bernard Arnault.

With Karl Lagerfeld at his side, Arnault is widely expected to officially declare that the superstar designer will extend his 40-year collaboration with Fendi — and hopefully lead it to greater fashion heights. It is understood negotiations to renew Lagerfeld’s contract are nearly concluded. Indeed, Lagerfeld was slated to arrive Tuesday night and remain in Rome for several days to work on the forthcoming spring 2006 collection with Silvia Venturini Fendi, who oversees accessories categories at the 80-year-old firm.

“We are going to conquer Rome, and from there everything starts,” said an elated Fendi chief executive officer Michael Burke, after giving WWD an exclusive preview Tuesday of the 8,000-square-foot flagship. It’s the centerpiece of Fendi’s new seven-story palazzo smack in the nucleus of the city’s throbbing luxury shopping district at the base of Via Condotti.

The vast construction project, at an estimated cost of $25 million, represents for Fendi what Rue Cambon is to Chanel or Faubourg Saint Honore is to Hermes: a creative hub where design studios, ateliers and a retail store project a coherent and powerful image.

The store is estimated to bring in first-year sales volume of about $26 million. “I happen to believe no brand can be a success globally if you are not relevant in your home market,” Burke stressed. “It’s the first time all the elements of Fendi come together under one roof.”

And architect Peter Marino’s design concept — meant to channel Fendi’s Roman roots and brand values such as glamour and fun — will soon roll out to the entire network of 117 stores, Burke confirmed. The plan is to renovate stores at the rate of two per month.

Neither Burke nor Marino minced words when asked about Fendi’s previous “dark store” concept. “This is one case where the store really hampered the merchandise,” Marino said. “The old Fendi store actually angered people. They would say, ‘I can’t see anything.’ People would literally walk out.”

By contrast, Marino’s interior pays poetic homage to Rome, with crusted walls suggesting the beautiful decay of ancient buildings and its San Pietrini stone floors, made of the same materials as paving blocks, albeit polished for a high gloss. Inspired by the handstitching done on Fendi bags and furs, Marino even scored the walls, in steel or amber-toned glass, using a mold of ridges created by his own fingers to ensure irregular spacing.

Unusual for Rome, the two-level boutique boasts high ceilings and vast rooms, some offering views of streets framing both sides of the palazzo. The centerpiece is an intricately carved wooden staircase Marino transformed with a dark metallic automotive lacquer and interjected with an ultramodern 23-foot chandelier.

Marino’s concept was fine-tuned at two prototype locations, in Hong Kong and Osaka, Japan. A Fifth Avenue flagship in New York, tucked in between Gucci and Cartier, is slated to open before Christmas with what Marino calls a “virtual fountain” as the centerpiece.

As big as it is, the Roman flagship will be further enlarged in two additional phases, the largest being toward the rear of the building, when the Banca di Roma’s lease expires in about two years. After its final phase, the store will span more than 12,000 square feet, enough room for such forthcoming categories as jewelry and clothing for infants. “What could be more Italian than bambinos?” Marino quipped.

Burke said Marino’s design was meant to “bring everything out in the product. It’s the perfect foil for Karl and Silvia’s products.”

Fendi rushed to production about half of the fall-winter collection, allowing the store to open to the public Thursday with such items as raspberry-tinged broadtail coats and knee boots heavily beaded in a baroque style.

Reiterating Fendi’s strong momentum, Burke said year-to-date sales in its store network are up 40 percent, led by lusty demand for its slouchy “Spy” bag with secret compartments. Burke disclosed that at the conclusion of the spring-summer selling season, Fendi will have sold more than 10,000 units at an average price of $2,000 retail.

He also vowed to improve results in the ready-to-wear department, acknowledging lackluster success in recent years, which he blamed on a “lack of focus” and improper organization.

“You can have a great shoe or a great bag, but ready-to-wear is more complex,” he said. “You need studios, ateliers, merchandisers, the wholesale part. It’s not a one-hit wonder. It’s a collection.”

About 450 people are expected to attend tonight’s opening festivities, including Christian Dior chief Sidney Toledano, who also oversees Fendi strategy; the artist Anish Kapoor, who has a sculpture on display in the store, and a private jet load of celebrities from the Cannes Film Festival, including the likes of Tilda Swinton, Maggie Cheung, Anna Paquin and Mischa Barton.

In tandem with today’s opening festivities, Fendi mounted an outdoor display of photos by William Klein and a temporary, high-tech exhibition of Fendi’s fur artistry with a piped-in voice that repeats the mantra “Nothing is impossible.” The latter display is meant to travel to such cities as New York, Tokyo and Hong Kong.

PARIS — It’s been years since Karl Lagerfeld has been on a bus; his clairvoyant told him it could bring disaster. But the designer made a very stylish exception on Tuesday as he loaded models onto a convoy of vintage green buses here to present a chic cruise collection for the house of Chanel.

“You know, this isn’t just any bus,” he reasoned, as he explained the cool knits, diaphanous lace dresses, jackets with military epaulettes and a breezy “Coco” print on everything from baggy blousons to flirty skirts. “It’s very lighthearted and easy,” he said. “A mix of sophistication and sport, with a game of proportions.”

Tweed, of course, abounded, whether in the form of suits or separates. It snaked around the waistband of slinky trousers and was placed like patches over faux rips. Meanwhile, sequins were embroidered on skirts, dresses and vests, a testament to the house’s couture-level handiwork.

Setting off from the Place de la Concorde, the fashion fleet ambled across the Seine to St. Germain, making occasional stops so models could switch buses. Lagerfeld rotated, too, offering commentary. “I used to love riding the bus in Paris as a schoolboy,” he said. “I loved watching the scenery of the city.”

Clearly Paris — at least as a rarified icon of style — is on Lagerfeld’s mind, judging from the berets, dresses decorated with cutouts of Parisian monuments and charms such as shrunken versions of the Eiffel Tower.

Then the tone shifted to red-carpet fare. The buses deposited editors at the Café de Flore, where they sat down to canapés and champagne and a beautiful brigade of evening gowns.

“Everyone’s asking for evening,” said Lagerfeld of his beguiling confections in lace or silk chiffon.

When it was over, the designer sat down to chat with the likes of actresses Anna Mouglalis and Virginie Ledoyen. “They used to do a lot of ready-to-wear shows in cafes and restaurants,” he offered. “One of my first Chloe shows was at [Brasserie] Lipp. It’s very Paris, no?”