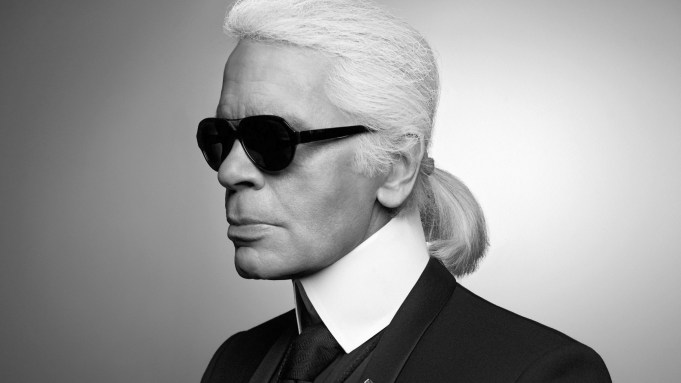 PARIS — “He knows exactly what he has in the frame. There are no accidents, no surprises.”

So says Eric Pfrunder, image director of Chanel and co-curator of “Karl Lagerfeld, a Visual Journey,” a sprawling and diverse photo exhibition that opens at the Pinacothèque de Paris art gallery here Friday and runs through March 20.

Pfrunder knows better than anyone. In January 1987, when Chanel’s couturier complained to him about the quality of some press-kit photos, Pfrunder dared him do better. “I said to Karl, ‘OK, now you do it,’” he recalled on Thursday during a walk-through of the spare, dimly lit showcase.

Of course, Lagerfeld has never stopped shooting – campaigns, editorials and artistic imagery — always choosing the best location, the best lighting and without any waffling, according to Pfrunder.

“Karl has an eye,” he marveled. “He’s not taking 300 shots. He’s doing five, maybe six. Generally, it’s the first frame that is the best. He’s very fast because he has one vision, and that’s it.”

While Lagerfeld is reluctant to describe his photographic style, Pfrunder cited a storytelling approach, and a distinct “atmosphere” heightened by strong contrast. “When it’s black, he likes it deep black,” he said, pointing to a never-before-seen nude series of model Baptiste Giabiconi taken in Rome amidst classic columns and pools. “You see the contrast? You can almost feel the stone. Those pictures are like sculptures.”

Behind the images also lies “a great know-how in using photographic techniques” and a commitment to printing “all on beautiful paper. This is really the sense of Lagerfeld,” said German publisher Gerhard Steidl, the other co-curator and Lagerfeld’s partner in his 7L imprint.

Steidl called the exhibition one of the most complete ever of the designer’s photography, spanning 1998 to 2015 — an homage to Lagerfeld’s “visual creativity.”

The subject matter is indeed varied: Here a snowy Paris street; there a dramatic, silvery portrait of actress Diane Kruger. Landscapes, fashion shoots, architecture and abstractions are all on show, in formats ranging from small framed photos to a billboard-sized work on glass titled “The Journey of Odysseus” and depicting the travails of the Greek king.

Lagerfeld said next week he would turn his lens on model Cara Delevingne for the next Chanel eyewear advertising, and then later this month head to Manhattan to shoot Chanel’s ready-to-wear campaign. “For photography, there’s a great energy in New York,” he said.

The designer said he would like to next make an exhibition featuring only iPhone photos. “It’s really great now technically,” he said, twiddling a phone in his gloved hands.

What does he aim his smartphone at? “Choupette first,” he said, referring to his pet Birman. “No selfies, I don’t do selfies. Architecture, fittings, flowers — everything.”

Echoing Pfrunder’s assertion, Lagerfeld said he often has a vision of his photos before they’re taken, “like a flash in a quarter of a second. I could very well work like in the old days with the glass plates when you needed to do three to make one page.

“Very often, it’s very strange, what we use is the very first photo taken, even with the digital camera. And I’m very bad on retakes,” he continued. “That’s why I think it’s interesting not to do thousands of photos hoping there will be a good one.”