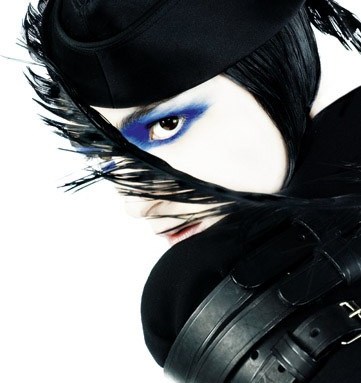 PARIS — Is it any surprise that fashion’s greatest multitasking genius Karl Lagerfeld is just as versatile in the world of photography?

A survey of his work that opens at the Maison Européenne de la Photographie today has it all: images from blurry to crisp; some sepia-toned, others shimmering like caviar or slashed with vivid color.

The subject matter is just as broad: from an opulent, 18th-century fashion shoot and dreamy landscapes to minimal abstractions of nature and architecture. “I’m an illustrator with a camera,” Lagerfeld said Tuesday amidst some of the 300 works on display.

As in fashion, the designer is propelled by the new, and said he is fascinated with techniques new and old, from resinotypes and Polaroid transfers to black-and-white images he hand-colors with Shu Uemura makeup. “Moving ahead is what I think is the most exciting, non?” he said. Lagerfeld first picked up a camera in 1987 when, frustrated with the images done for press kits at Chanel, someone suggested he do it himself. “Famous photographers like [Helmut] Newton didn’t do press kits then,” he shrugged.

It wasn’t long before he was doing fashion shoots for French Vogue, creating another vocation for himself besides designing for the likes of Chanel, Fendi, Chloé and his signature label. Today, Lagerfeld employs six people full-time in his photo studio on the Rue de Lille here, and he still shoots press kits in addition to countless editorials and campaigns for Chanel and Fendi, as well as external clients like Dior Homme. Recently, he shot the famous Pirelli calendar and has also segued into making short films for Chanel shows and its Web site. The exhibition, titled “Parcours de travail” (“Work history”) and running through Oct. 31, ranges from an arty 1997 ode to Bauhaus icon Oskar Schlemmer to scores of recent photos of model Baptiste Giabiconi, one depicting him as a muscle-flexing Ken next to a Barbie doll. Famous faces captured by Lagerfeld include Claudia Schiffer, Jack Nicholson and Sharon Stone, snapped impromptu at an amfAR event in Cannes.

One room is devoted to stunning, large-scale images of Versailles, one of Lagerfeld’s favorite places to wander and photograph, emblematic of his love for France. “I could work there as a tour guide if there’s ever a strike,” he said, winking behind his aviator sunglasses. Not surprisingly, the exacting Lagerfeld is not the type to snap hundreds of pictures and sift through them afterward. He said the very first frames of a portrait or fashion shoot are typically the best.