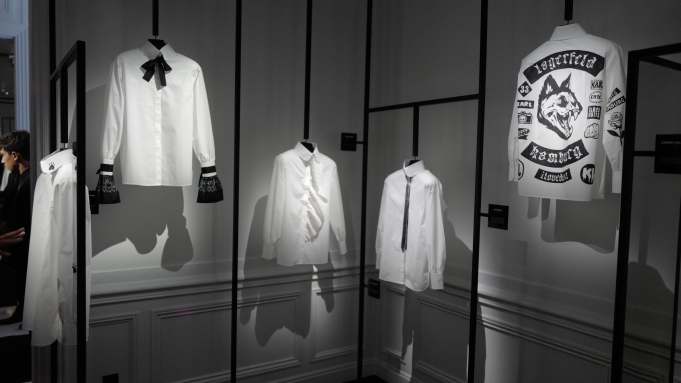 When Karl Lagerfeld chief executive officer Pier Paolo Righi called Tommy Hilfiger and asked if he might create a white shirt as a tribute to Karl Lagerfeld, the American designer didn’t hesitate. “That’s amazing, count me in,” was his immediate reaction, Righi related.

Ditto for the likes of Cristiano Ronaldo, Helen Mirren, Cara Delevingne, Lewis Hamilton, Takashi Murakami and scores of others, whose creations were unveiled Wednesday night at Karl Lagerfeld’s Paris headquarters — some spinning on silver carousels, others suspended from wires like artworks.

The scale of the project, which widened to include Farfetch as a key distribution partner for seven designs being sold 77 times at 777 euros each, speaks to the momentum of the brand — and the goodwill and genuine affection that is fueling it at a rapid pace, only seven months after the death of the legendary German designer.

Righi said the brand is projecting growth of more than 25 percent this year, and that’s on top of a more than 50 percent jump in 2018. “That’s very much across all geographies, and the whole online business is outpacing the other channels,” he said, attributing the latter phenomenon to a solid following among young, connected generations.

The executive declined to give figures, but said the brand would add roughly 20 company-owned, franchise and joint-venture boutiques this year, principally in China, as well as Russia and the Middle East. “And I think we will continue this pace next year,” he said in an interview in his office, the walls dotted with photos by Lagerfeld and the mantle set with two plastic Karl figurines — one black, one silver.

Market sources estimate the Karl Lagerfeld brand generates retail revenues north of $600 million, fulfilling the late founder’s conviction that his signature brand should be in the premium, affordable segment — not the designer stratosphere.

The company also continues to unfurl an eclectic range of collaborations: some initiated while Lagerfeld was still alive; others in his spirit of freewheeling projects — many of which he was proud to do before anyone else had thought of it.

Upcoming initiatives include a collection with Cover Story, often called the Zara of India, hitting stores in about a month’s time; a second collaboration with German sportswear brand Puma, after the first small drop evaporated in a flash; a makeup line in collaboration with L’Oréal Paris being feted here on Friday, and a 270-room hotel in Macau, slated to open in the spring.

“We are also unveiling soon in Asia a partnership and collaboration in the car sector,” Righi let slip.

Indeed, the brand seems to be firing on all cylinders, with Righi citing a roughly equal split between leather goods and apparel, the latter recently expanded and logging faster growth than accessories.

He said employees, 200 of which are concentrated in Amsterdam, are energized by the opportunity to perpetuate Lagerfeld’s influence, which stretched beyond fashion into music, architecture, art and film — always with a light touch.

While Lagerfeld propelled the other houses he worked for — Chanel, Chloé and Fendi — to new heights, only his signature house can fully tap into his legacy.

“He was so rich in everything he offered as a persona, as a creator,” Righi said. “We build the brand around his key attributes: his iconic personality, and his interests across the culture.…We are really carrying the designer’s DNA and world in our souls.”

That said, the company also absorbed Lagerfeld’s insistence to never exalt the past too much, and focus on the present. Righi noted that the next collection goes back into the archives of the Eighties and Nineties, but “reinterpreted and bringing them into the future.”

He allowed that the white shirt project, which mushroomed in its scope, will likely cement that garment as an essential part of its “rock chic” fashion repertoire.

Lagerfeld was famously addicted to paper — and shirts. “It was his signature, you know, and he got them made-to-measure,” said Carine Roitfeld, style adviser at Karl Lagerfled and curator of the tribute project. “He’s a Virgo like me, so when we find something we like, we buy two, 10, or dozens of them. Karl liked to be very dressed up.”

The editor and fashion entrepreneur confessed she’s “not a shirt person,” averse to something too close to her throat. So her tribute shirt unbuttons on the side, allowing the collar to fall away — and boasts a corseted waist. She recalled that Lagerfeld complimented her when she was obliged to wear a corset following back surgery a few years ago, and so it’s a wink to him and their shared taste of structured clothes.

Most of those conscripted to do tribute shirts had a close, personal rapport with Lagerfeld.

“Karl let me explore myself and opened me up to something I had not seen in a while, and for that I will be forever grateful. I miss him so much,” said Delevingne, whose shirt is decorated with most of her tattoos.

“I know Karl would have loved to be remembered through creative processes,” said Gigi Hadid, whose short-sleeved design has a sketch of Lagerfeld roughly stamped on the back and “Karl Forever” scrawled in black marker on the collar. “I felt him with me while making this shirt.”

Ronaldo did not know Lagerfeld personally, but employees at the house noticed the soccer hero often dressed his children in his brand. “I believe everyone should try to leave a legacy. Without a doubt, Karl did,” he said.

Mirren said he would remain an inspiration to many “as his legacy expands his work.”

Shirts by Delevingne, Hilfiger, Roitfeld, Diane Kruger, Murakami and Lagerfeld’s longtime bodyguard and personal assistant Sébastien Jondeau are to go on sale today at karl.com or farfetch.com. Assuming all are sold, it should yield almost 419,000 euros for Sauver la Vie, a charity Lagerfeld personally — and quietly — supported for years.

The original shirts will then be dispatched to Karl Lagerfeld stores worldwide for display, and Righi hinted at other possible exhibitions.

“Everything we do as the brand around the designer’s name is in a way a tribute,” he mused.