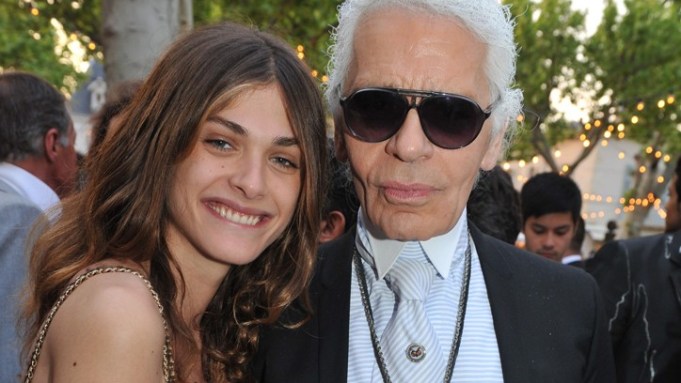 SAINT-TROPEZ — “This film is brought to you in Karl-vision.”

It’s not such a far-fetched tag line as Karl Lagerfeld preempted the Cannes Film Festival by two days with a star-studded screening of his own.

Here to show Chanel’s cruise collection tonight, the designer first unveiled a 17-minute film titled “Remember Now” and captured the good-natured summer hedonism of this storied playground of the rich and beautiful.

Georgia Jagger, Vanessa Paradis and Diane Kruger were among those who strolled into the Cinema de la Renaissance Monday night to watch what was essentially a road movie involving Lagerfeld’s new Rolls Royce Phantom Drophead Coupe — “a Christmas present,” the designer said — and a gaggle of models impersonating such mythic Riviera figures as Brigitte Bardot and Sacha Destel.

“Karl is a very spontaneous and creative director,” said Elisa Sednaoui, who appears in the film alongside French actor Pascal Greggory, model Heidi Mount and, for the nightclub scenes at the VIP Room here, about 100 extras. “He’s very responsive and alive for that. There’s no indecision, but he adapts himself.”

Mount, who also appears in Chanel campaigns, likened the actors in Lagerfeld’s films to dolls he moves around at his whim. “There’s a script, but it’s basically Karl telling you what he wants,” she said. “He has the whole thing up in his head.”

Indeed, making movies seems to come as spontaneously to Lagerfeld — who also does ready-to-wear for Fendi and his signature label — as designing collections.

“When I do a film, I see the movie before I’ve made it,” the designer said Monday between fittings. “I don’t make scripts because it’s written in my head. I like short one-liners.”

And Lagerfeld himself set up the best one with a cameo in the movie, strolling into a house party that had raged all night, the couches strewn with slumbering youths. “I vaguely remember you asked me for lunch at one o’clock,” he teases Mount, cast in the role of party hostess.

“Yes, but this is Saint-Tropez,” she replies.