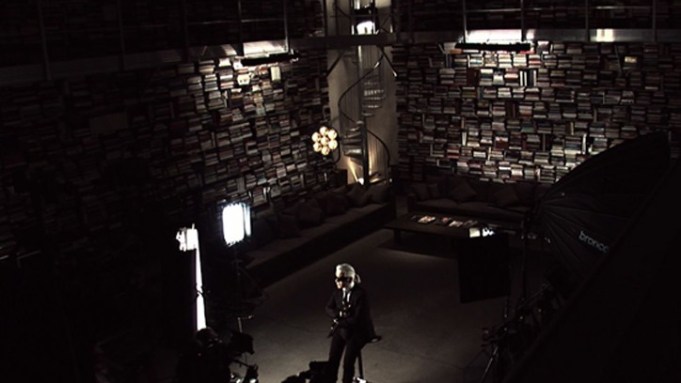 PARIS — “I hate to see myself, but it’s part of the job,” Karl Lagerfeld said Tuesday night after a screening of the latest documentary about him. “I had an overdose of me.”

But the audience — journalists, Chanel executives and house regulars like Audrey Marnay and Clémence Poésy — couldn’t get enough of “Karl Lagerfeld, Un Roi Seul” (“A Lone King” in English), a 52-minute documentary by Thierry Demaizière and Alban Tuerlai that had the crowd roaring with laughter.

Destined for French television, and soon a version with English subtitles, the fast-paced film flits from recent collections and Lagerfeld’s jet-set lifestyle to archival material showing interviews with Coco Chanel, scenes of the Second World War and the younger Lagerfeld — seen French-kissing for an Andy Warhol movie in 1973.

Filled with his signature deadpan humor, the film has Lagerfeld relating how his mother took his piano away, telling him to draw instead with the rebuke: “It makes less noise.”

Less humorous recollections include learning of his father’s death weeks afterward because, as his mother explained, “You don’t like deaths or funerals so I didn’t tell you.” Lagerfeld tells Demaizière he couldn’t help but be a little impressed by that.

Of his fashion counterparts, the designer shares mixed memories of the late Yves Saint Laurent, with whom he was famously at odds in recent years. “He was a really funny boy, wild,” Lagerfeld said. “He wasn’t the same person later on.” Asked about Saint Laurent’s explosion in popularity in the Seventies, Lagerfeld’s quick-fire response refers to his subsequent “implosion,” alluding to his battles with drugs and depression.

Discussing Chanel, Lagerfeld suggests the house lost its edge in the later years of Coco Chanel’s tenure because the designer became too critical of new fashion trends such as higher hemlines. “She innovated and after she criticized,” he said. “Then she was no longer part of fashion.”

Lagerfeld, meanwhile, is portrayed as being at the cutting edge of popular culture. Filmed at a Fendi party last March as an Amy Winehouse performance is seen reflected in his trademark shades, he declares, “I admire people who destroy themselves.”

Asked if he is a narcissist, he replies, “I think it’s a good thing to be. It stops you letting yourself go. It should be an obligation. It stops you being a burden to others.”

As for his signature shades, he says his shortsightedness means without them he looks like “a poor dog you find in the woods who wants you to adopt him.”

True to form, one of the closing scenes shows Lagerfeld chiding Demaizière for asking “a useless question” about what legacy he will leave. “I’m the only one who will never know the answer to that,” he said.

Some footage Lagerfeld discovered for the first time, such as archives of the war years, which he spent drawing pictures 75 kilometers outside Hamburg. “I didn’t see any of it [the war] as a child,” he said.

Marnay, for one, plans to get a copy of the documentary to watch on her iPod. The actress is next off to South Korea to promote her latest film, “Nucingen Haus,” directed by Raoul Ruiz of “Klimt” fame, which is also showing at the London Film Festival in October. Poésy, meanwhile, has just wrapped British film “Heartless” alongside Jim Sturgess. “It’s a modern take of Faust,” she said.

The Lagerfeld documentary, produced by Eléphant & Cie, is due to air Oct. 3 on France 5 during Paris Fashion Week.