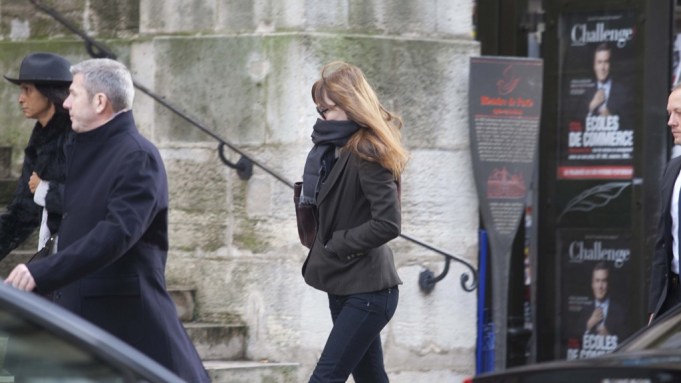 PARIS — Jane Birkin, Charlotte Gainsbourg and Lou Doillon on Thursday paid an emotional tribute to their daughter and sister Kate Barry, who died last week at the age of 46.

A photographer known for her intimate portraits of celebrities including Deneuve and Huppert, Barry fell from the window of her fourth-floor apartment on Dec. 11. Authorities have yet to rule on the cause of death.

In a nod to her British nationality, the service was held in both French and English, with Rev. Canon Alyson Lamb, chaplain of Saint Michael’s Anglican Church in Paris, officiating in both languages.

Anglican hymns were interspersed with songs written by Barry’s father, the late Oscar-winning composer John Barry, including the themes from “The Lion in Winter” and “Midnight Cowboy.”

Next to the altar stood an arresting black-and-white self-portrait showing Barry, her face mostly obscured by her outstretched arms slipped into a pair of jeans, dangling a cigarette from her lips.

Friends and colleagues remembered her as exceptionally compassionate, thoughtful and sensitive. They recalled how she recovered from early drug and alcohol addiction and subsequently moved mountains to open a treatment center for addicts based on the precepts of Narcotics Anonymous — a first in France.

Birkin read the lyrics of her song “A la grâce de toi” (“For the Grace of You” in English), while Gainsbourg recited the words of “Fuir le bonheur” (“Flee Happiness”), written by her father, French singer-songwriter Serge Gainsbourg.

Her voice breaking with grief, Doillon read lines from William Shakespeare’s “Cymbeline” before reeling off a list of words describing her sister, including “funny,” “radiant,” “generous,” “pain in the neck,” “courageous,” “chaotic” and “elegant” — though she concluded that none could adequately sum her up.

Father Patrick Langue, a friend of the family, appeared to suggest her death was not a suicide.

“Her passion and fragility nourished a heart that was incredibly sensitive to the suffering of others, because she felt that childhood injuries never fully heal. They can nourish a boundless source and strength to help wounded creatures,” he said.

“Death crept up on her. The fall, which made her brutally plummet into the void that she feared, cut short a story she wanted to continue,” Langue added.