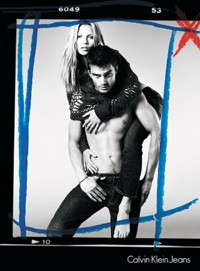 NEW YORK — Calvin Klein Jeans and Kate Moss have picked up almost where they left off.

In the company’s fall ad campaign, the black-and-white photos of Moss and actor Jamie Dornan are slightly reminiscent of the Nineties images of Moss and Mark “Marky Mark” Wahlberg, which triggered Moss’ career and contributed to her iconic fashion status. The latest campaign just happens to be 14 years later.

“With Kate Moss, we wanted to capture what we had done before: two strong icons together again,” said Fabien Baron, creative director of the campaign, in an exclusive preview of the images. “She’s very sensual, and it’s very much about her character, her personality and what she is about.”

Mert Alas and Marcus Piggott shot the ads at the Jack Studios here in April, and the art direction gives the ads a raw feel: Each image is presented like a visual from a contact sheet, replete with China marker selections. “It’s almost like a work in progress,” Baron said.

Moss is shown coupling her jeans with a cableknit cardigan, a jacket or topless with her arms covering her breasts. In one picture, she is wrapped around a topless Dornan, with a part of her crocheted sweater covering his right shoulder. “Sex is always something that is part of the Calvin Klein company,” Baron said. “These ads are sexy, I don’t think they’re sexual. Calvin Klein is the ultimate image of American sexiness, and this campaign represents that.”

Moss last starred in a Calvin Klein Jeans campaign in 1999. “Apart from the fact she has become a bigger icon, I found her to be very much what she was back then,” Baron said.

The ads will break in August issues and run through December. They will be placed in magazines such as Vogue, In Style, Jane, Glamour, Lucky, Teen Vogue, GQ, Maxim, Out and Rolling Stone. In addition, there will be cover gatefolds in the August issues of W and Interview, and in September Vanity Fair, Nylon and Details. The ads also will grace billboards on the corner of Houston and Lafayette Streets here, and Sunset Boulevard in Los Angeles, as well as on taxi roofs and posters around New York.