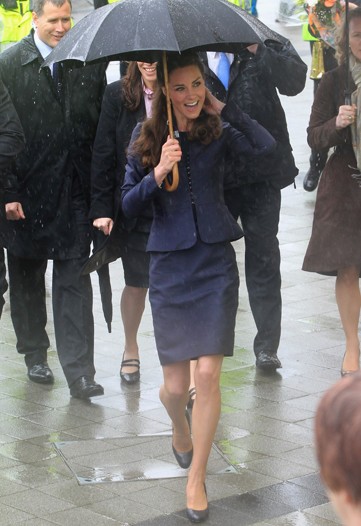 LONDON — There are three weeks to go until K-Day, when royal bride-to-be Kate Middleton will, after five months of keeping the public on tenterhooks, reveals her sartorial secret. Buckingham Palace officials confirmed earlier this week that the details of her dress would be revealed the minute Middleton steps out of her car at Westminster Abbey on the morning of April 29.

“The aim is to protect Prince William from knowing anything about the dress — something all brides do on their wedding day,” said Patrick Harrison, Prince Charles’ press secretary.

That may be the case, but the secrecy has ignited a flurry of speculation as to which designer is doing The Dress. Bookmaker Paddy Power has revised its odds, now offering 1-25 it will be Sarah Burton of McQueen — who has already denied she is doing the dress — making her by far the favorite, and 4-1 it will be Bruce Oldfield. Other names that have been bandied about in the past include Alice Temperley, who sources say is not doing the dress; Phillipa Lepley, who has also denied the speculation, and Issa’s Daniella Helayel (12-1), who is keeping resolutely mum.

What is increasingly clear as the Big Day approaches is that Oldfield, Helayel, Temperley and the design team at Catherine Walker are all involved with the wedding in some way. Face it, there are plenty of dresses to go around: In addition to the Big Dress, there are the outfits for the little bridesmaids and maid of honor Pippa Middleton, and the outfit Kate will wear later that evening for dinner and dancing at Buckingham Palace. Not to mention the mother of the bride’s dress and the dress the Duchess of Cornwall will wear.

Elizabeth Emanuel, who together with her ex-husband David Emanuel created Princess Diana’s iconic wedding dress, told WWD she is convinced there will be “a surprise element” to Middleton’s outfit.

“It’s such an important dress, there’s got to be a classic underlying look to it, but I think there will be a little bit of a twist…an element of excitement,” she said.

Emanuel added the mystery designer, at this point, will have already sewn the body of the dress and will now be working on additional handwork, such as embroidery, beading and other embellishment. Emanuel said she was working on Diana’s dress until the last minute. “We could never put enough sequins and pearls on — it was that kind of dress,” she said.

On the following pages, a rundown of some of the candidates, and their pros and cons.

Bruce Oldfield
Pros: The sweet-natured elder statesman of British wedding gown design, Oldfield is a darling of the social set and has already dressed a number of Middleton’s pals. He’s a safe pair of hands and can build a dress that would stand up to the Gothic grandeur of Westminster Abbey.

Cons: He’s closely associated with Princess Diana, whom he dressed in the Eighties and early Nineties. He’s in his 60s, and might not be the right designer for Middleton if she wants to forge her own style.

Catherine Walker
Pros: Although Walker died last September after a long illness, she left behind a strong, talented and loyal design team to continue her work. Wedding dresses — and utter discretion — are their specialty, and clients include royals such as Lady Gabriella Windsor and Lady Helen Taylor, and actresses such as Joely Richardson and Vanessa Redgrave.

Cons: Walker also was a close friend and favorite designer of Diana, who is buried in one of her black dresses. Once again, the label wouldn’t be right if Middleton wanted to make a fresh fashion start.

Daniella Helayel
Pros: She’s already a firm favorite of Middleton — she wore a royal blue Issa dress on the day of her engagement. She clearly feels comfortable in Helayel’s designs, and surely would have had fun collaborating on a dress.

Cons: Helayel is Brazilian, and it’s likely that Middleton will choose a British designer. Also, Helayel doesn’t specialize in wedding dresses, and this one is a mighty tall order. It’s more likely that Helayel is designing one or more of Middleton’s dresses for the wedding dinner dance, or for the honeymoon.

Alice Temperley
Pros: Temperley is already a favorite of Middleton and her sister Pippa, and she has a booming business designing wedding gowns. Pippa and Carole Middleton were recently photographed outside Temperley’s studio deep in conversation with the designer.

Cons: Sources close to Temperley have already said she’s not doing the Big Dress. In addition, Temperley’s designs — while delicate and beautiful — have a sexy, Bohemian feel, making them better suited to barefoot weddings in Barbados than to buttoned-up affairs in one of Britain’s most awe-inspiring churches. Temperley is more likely to be doing Pippa’s dress for the day or Kate’s evening look.

Sarah Burton
Pros: Burton has wowed the fashion set since she showed her first collections as creative director for McQueen last year. Her own wedding dress was designed by the late Lee Alexander McQueen, and she has worked on countless other show-stopping wedding dresses for McQueen customers, including Plum Sykes and Sara Buys, who’s married to Tom Parker Bowles, the Duchess of Cornwall’s son.

Cons: While Burton’s aesthetic is sublime, and she’s certainly up to the job, she would be an unusual choice for Middleton, whose style remains mumsy and staid.

What she’s saying: Burton herself, a McQueen spokeswoman and McQueen’s chief executive officer, Jonathan Akeroyd, have all repeatedly denied that Burton is doing the dress.

THE ONES WHO GOT AWAY:

Phillipa Lepley
Lepley, a wedding dress designer whose boutique on London’s Fulham Road is the go-to place for celebrities and socialites alike, was widely tipped to be Middleton’s choice earlier this year. A spokeswoman, however, has denied that Lepley is doing the dress.

Anna Valentine
Valentine made the Duchess of Cornwall’s dress for her marriage to Prince Charles, as well as wedding gowns for Laura Parker Bowles and the ever-stylish London socialite and eco-campaigner Sheherazade Goldsmith. She is widely respected, and up to the job, but a spokeswoman has denied she’s involved with the dress.

Erdem
Erdem Moralioglu’s lace creations would lend themselves perfectly to an ornate bridal gown, but his designs are perhaps a little too edgy for Middleton’s taste. Also, he’s Canadian, and, again, Middleton is thought to have chosen a Brit. A spokeswoman for Moralioglu said he isn’t designing the gown.

Vivienne Westwood
Though Westwood got a royal nod in 2006 when she was given the title of dame by Queen Elizabeth II, she will definitely not be designing the dress. In February, Westwood told reporters at her Red Label show in London that she would “love” to dress Middleton, but not until the bride-to-be “catches up somewhere with style.” A Westwood spokeswoman denied any involvement with the royal wedding dress.