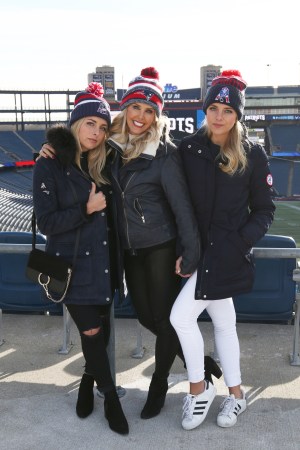 In the carpe-diem world of new media, the above elements added up to a unique market opportunity for said twins. Despite their birth year, 1992, well into the era of “Full House” fame, the twins insist that any similarity between themselves and persons real or Tanner is purely coincidental. “My real name is Katrina,” Katie offered as ironclad evidence.

She and Ashley Hess are The Party of Two (thepartyof2.com), the blog they launched in 2013 “at the suggestion of guy friends” while in Paris for junior year abroad, but which they started to approach as a profession this past fall. “We kind of think of our blog as a multi-media platform, since social is so critical these days,” Katie said. “Basically, it features our personal style, our mental musings, what we’re thinking about, and local insight on the Boston area. We kind of placed ourselves as sartorial rebels among Boston conservatives. We try to curate what’s cool, what’s relevant and what you should be coveting now.”

Their qualifications: opinions and confidence, both bolstered by their mutual major at Trinity College, American studies with concentrations in pop culture and visual studies, and minor, writing. They speak with one voice – almost literally; they sound exactly alike on the phone, and, in a conversation on Friday, patiently started every comment with “this is Katie/Ashley.” For the blog’s fashion posts, they trade off modeling and taking pictures, with the photographer typically writing the post. They neither sign posts nor ID the photos, so unless there’s a specific reference to the other sister, “Ashley and I like…” the reader doesn’t know who’s who. But they’re thinking of changing that.

A recent post lauded leopard: “Here, kitty kitty. The thing with leopard is that while it’s not the obvious answer to most style-related questions, it should be; another noted the joys for New Englanders of donning swimwear in January, in Florida: “Remember that time it was 60ºF and you didn’t have to wear dorky smart gloves just to write a tweet as you were walking outside?” They’re not fans of the “admire my breakfast” Instagram, explaining why not in a 635-word post that begins, “I’m stirring my pot of quinoa and watching closely as the germ starts to separate from the seed…” They do like to share deep thoughts, such as this on age: “Quite literally, each of ours changes every day, every hour, every minute and every second.”

As for seizing the marketing moment, this week, the twins are contributing to patriots.com, a collaboration heralded in a p.r. pitch that included: “Katie and Ashley Hess…are the identical twins of Linda Holliday, longtime girlfriend of New England Patriots Head Coach Bill Belichick.”

Huh? That Bill Belichick? The gruff guy in the hoodie, the one who grunts out one- and two-word answers at his mandatory (or else he wouldn’t be there) post-game press conferences? That Bill Belichick is allowing fashion bloggers — albeit, bloggers he must love (as people; life is strange, but not so strange that he could possibly love them as fashion bloggers) to invoke his name and his romantic relationship for marketing purposes? On the day before his divisional playoff game against the trending-seriously-upward Kansas City Chiefs? It gets better. The pitch notes that “the twins have become regulars at the games with their mom and Bill Belichick, rarely missing a home or away game.” The line conjures images of Bill, strolling the sidelines in carefree bliss, surrounded by a trio of blondes.

As a fairly serious and reasonably informed (I think) consumer of the glories of the NFL, the improbability hooked me, the pitch seemingly beyond off-brand for the surly brand that is Bill Belichick. I even considered a hoax by a pair of post-adolescents with time on their hands. (Many years ago, some girl got into Paris fashion shows by claiming to be Elizabeth Taylor’s granddaughter.) But the names, the blogs, the links to the Patriots’ site all checked out. (Alas, e-mails to the team p.r. went unanswered.)

My mind went, too, to my morning show of choice, ESPN’s Mike and Mike. (For the uninitiated, a merry juxtaposition of Mikes Greenberg, the svelte, impeccably groomed former Stuyvesant-Northwestern fan-journalist geek, and Golic, the big, tough, former Notre Dame-NFL D-lineman, who sings beautifully. But I digress.) Greenberg has on several occasions referenced Belichick’s off-camera demeanor as warm and even funny. (I’m remembering, not quoting.) To that end, a quick google displayed all kinds of friendly-ish pictures of the coach, often with the twins’ mother, Linda Holliday, including in which he’s dressed as a pirate for Halloween.

But offering himself and his romantic relationship up to market the kids’ fashion blog? Clearly it’s not a blind-side; the posts are to patriots.com, and one assumes that little goes on in Foxboro without Belichick’s sign-off (football deflation perhaps the exception).

So, Hess ladies, is Bill Belichick a closet softie? “I would never call him a big softy. I would say, he checks his hard persona at the door,” said Ashley. “I don’t know how to describe it. He’s a great man.” She called him “a very intelligent guy who makes witty comments and jokes with us all the time.”

Katie suggested that the press drives the image of Belichick in a state of perpetual irritation. “I feel like the media loves buying into this persona of Bill as a tough, close-minded guy. That’s the wrong word – a tough, sarcastic guy,” she said. “He comes across as very dry in media interviews, but, I feel, it’s dry humor. When he’s at home with us, that humor comes out. I feel like humor and sarcasm is a language in our family.”

He’s very kind,” Ashley added. “I cannot say a negative thing about him.”

The sisters came across as extremely poised, willingly addressing their marketing ploy. “Bill’s name is actually not found on our site anywhere,” Katie pointed out. “That being said, Ashley and I are very grateful for the position that we’re in, but we obviously would never want to take advantage of that. We’re very grateful to be associated with him. It allows us with this blog to help women have an easier time getting dressed especially for football, which is traditionally a male sporting event.”

The idea to collaborate with patriots.com came from the site’s lifestyle editor, Briana Palma. (The sisters and the Web site share a publicist.) “I think where Briana wanted to use Bill’s name was mostly in connection with my mother. She’s really made a great impact on Boston,” Ashley explained.

“He supports our blog emotionally, like any parent would,” she continued. “He’s proud of the work that we do and how hard we work at it. He understands that we have a small following, and he wants to help us build it.” As for the word “parent, which both girls used, Ashley clarified. “I would never call him Dad. I have a dad. [We were older] when my mom met Bill. He’s my mom’s partner, and as long they’re happy, that’s all we want.”

At Palma’s request, for the patriots.com project, the sisters styled Holliday in looks for three viewing situations, as Katie described, “one for the suite, something you wear in the club level. Another would be layering, for outside in the cold. And we did one more for meeting your friend at a bar to watch, or to show up to a viewing party.” They culled the pieces from their mother’s and their own closets and the Patriots Pro Shop.

As for their real game-day looks, by Friday afternoon, they’d given it considerable thought. Both were leaning toward All Saints leather jackets, Kate, with high-waisted leather pants that she’s “currently obsessed with” from Boston-based designer Daniela Corte. She planned to decorate her jacket with Patriots patches, both new and throwback, the latter procured on Etsy. Ashley acknowledged that superstition informs her game-day style; she covers her jacket in Patriots pins and wears “black Mother jeans to pretty much every game. Also sort of out of superstition, I have these really cool Axel Arigato sneakers, just white trainers with a silver back on the heel.”

As for Holliday, her stadium best includes some constants, with sparkle at the top of the list. “Crystals are her things. She loves Swarovski,” said Ashley. One pin “has this giant heart that has Bill’s initials in it. It says ‘BB.’ She’ll probably wear it over a sweater.”

The Hess sisters’ love of football preceded their Patriot ways. They grew up in Arkansas, and “the SEC was everything to us,” Ashley said. “We didn’t have a pro team.”

Now, they’re die-hard Patriots fans. So much so that the only question they refused to answer was about what might happen on the field. Asked for their game picks, they wouldn’t go near it.

“I wish I could do that and have fun with it. But it’s family, it’s too close with us,” Ashley said. “It’s so personal, we never want to jinx it.”

“I’ll put it this way,” Katie interjected. “Anytime anyone mentions anything post-season, the closest piece of wood has 1,000 knocks on it.”