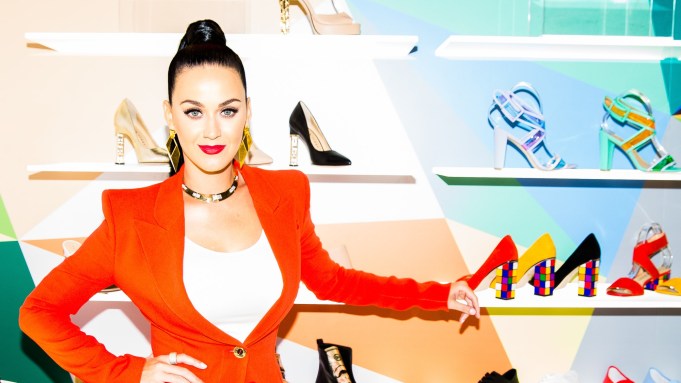 LOS ANGELES — In a cultural landscape obsessed with celebrity and Internet synergy, international pop stars don’t venture into fashion launches casually, nor with closed-ended objectives. It’s no surprise then that Katy Perry, she of the 100 million-plus Twitter followers, and Global Brands Group, the Hong Kong-based fashion branding giant, today revealed a joint venture that extends their Katy Perry Footwear deal unveiled last month, into other categories over the next several years.

Perry is both hard to pin down and completely accessible at the same time. Her peripatetic schedule and Internet ubiquity would seem to be at odds, but as the Labor Day weekend came to a close, she was ensconced in a cozy Hollywood recording studio, fresh off a visit to her hometown of Santa Barbara, Calif. She also appeared to be fresh out of the shower, her wet hair pulled back by a pink headband and her flushed skin devoid of any makeup.

“This is my uniform,” she said of her black Adidas tracksuit and rubber slides. “I wear the same thing all the time so I’ve become demagnetized to paparazzi, so I don’t perpetuate, you know, media culture. I don’t like to be a walking billboard unless I decide I want to be.”

She’s just as good at shifting into every-girl mode as she is at lighting up a room or a stadium. “I know how to turn it on, and this is me turning it off and also focusing on what matters, which is work. When I have something to launch, it will all light up again.”

Perry carved out time before a music recording session to talk about said launch. The week before, she spent a 16-hour day shooting the first ad campaign for Katy Perry Footwear, which debuts in January for spring 2017. It was far from a typical “show up, get glammed and strike a pose” shoot. Perry and company — she has four managers and a phalanx of close friends and advisers —  turned up at 8 a.m. to run through hundreds of shoe samples, multiple hair and wardrobe looks (no less than four Easter-egg hued wigs and eight racks of clothes) and three elaborate sets, one of which included her own light blue vintage Mercedes coupe. The first shot didn’t happen until 6 p.m.

“It’s not like an editorial piece. It’s something that I’ve created so I am a micromanager, which is great, but everything kind of goes slow. I know time is money, but it’s the beginning of a relationship and I’m, like, ‘You guys have to trust me.’ It’s a little overwhelming but I get a lot done,” she says.

As for her long-awaited entry into the design world, she noted, “People would ask me for years, ‘Are you going to foray into fashion?’ Music is always my root but I have creative branches, very female-based things I like in the marketplace, where I explore how to put my spin on it,” she said, referring to her fragrance license with Coty Inc. and her makeup line with Cover Girl. As for her shoe collection, it’s been a long-gestating idea. “I have a two-car garage full of shoes and my dream is to bring personality shoes to the marketplace at an affordable price for women [ages] 16 to 40 or beyond.”

The myriad groups in the spring collection — it will eventually be whittled down to about 60 styles — are inspired by her travels (Cuban cigar-shaped stiletto heels, flat sandals sporting beaded evil eye embellishments inspired by a trip to Greece); her sense of humor (pumps with gold bar heels, green mesh shooties with dollar sign motifs and slides with hand-sign appliqués that she calls “the new emojis”), and her sentimental favorites (the Easter bunny flats were modeled after a pair of beloved dalmatian flats she found in a thrift store 15 years ago). She’s also a fan of extra sensory experiences — just like her second record, her fruit-slice-adorned jelly sandals are scented.

She calls whimsical designers such as Charlotte Olympia, Sophia Webster and Kurt Geiger her “gods concerning shoes,” but says, “I want to be like them, but with my own spin for a more accessible price point.” While that’s somewhere between $59 and $299, Perry says she’s constantly negotiating down on behalf of her fans, whom she hopes will become her customers.

“I am always conscious of my audience. At my shows, I could jack up the ticket price for my peers, but I always have a price range available for that person who’s always been my fan. I didn’t grow up with any money and I was always getting by by the skin of my teeth, so affordable is just ingrained in me,” she says.

Perry makes it clear that she entered into the Global Brands partnership with serious intentions (read: she plans to micromanage for the long haul). “This is an actual business for me; it’s different from some of my other things that are more endorsements. This is a real creation, a 50-50 deal. I’m not doing it because of anything other than it’s my baby and I need someone to help me distribute it across the world. I trust Global and I need their expertise, so it’s going to be one of those things that in the long run will hopefully pay off. I just have to pay attention every step of the way and learn a lot and apply it.”

Perry is among the growing number of celebrities choosing equity stake or joint venture business models over licensing deals. “I don’t want my face on a toothbrush somewhere that I don’t know about. I don’t want anything I do to be diluted. I don’t want to be taken advantage of, and I don’t want to take advantage of the public’s attention by just doing something to do it, either,” she said.

She began meeting with potential partners three years ago, and has been working with Global Brands for over a year. She meets with her team there every two weeks and is already three out of four seasons into 2017.

A self-described “sponge” and “Curious George,” Perry devours each experience with the same gusto she does news and pop culture, as both a fan and a leader for her generation. “I never had an education growing up so I’m constantly asking questions,” she says. Her quirky fashion sense formed out of necessity (she could only afford thrift store clothes as a teen) is peaking at a time when individuality is in vogue.

When it comes to her new business, Perry wisely listens to feedback, from foot models to buyers, and eventually, from her public. “I went to Las Vegas [for FN Platform] and I met a lot of buyers. They’ll say, ‘We don’t have any buys on this particular shoe’ and I’m, like, ‘That’s because the public hasn’t had a voice yet.’ I understand and respect the buyers but there is a certain percentage of these shoes that you have to let the public speak on because they are the ones picking the music now, picking the films, and I am listening to them. Let’s wait for the tastemakers and bloggers and Tumblrs to see the ad campaign and make their own personality piece. That’s going to be a different buyer. That’s why e-commerce is so important, too. We have to have a place beyond our partners like Zappos and Amazon that’s solely ours.”

She says apparel is a long way down the road. “If I ever went there, we wouldn’t go from shoes to clothes, we’d probably go from shoes to accessories to clothes. But I think that is really far in the future. I have a lot to learn and I don’t ever want to be that person who thinks they know it all,” Perry says.

For now, she’s focused on feet. “No one’s calling it in for me, I’m calling it. I’m sure people would like things to come at certain projected times but if it doesn’t feel right I’m not doing it. I don’t rush anything. If it looks good and people are responding and I know that I can confidently give a cool spin on something, then I’m gonna try it. But if I don’t feel like that’s my zhush, then I’ll probably just stick to what I know.”

She’s frank about her place in the fashion lexicon, saying, “Listen, I’m no Anna Wintour, I’m no Karl Lagerfeld. I’m not of that world, but I watch it. And I know what goes into the shoe-making process. If the public knew how many restrictions there are in any creative process? I feel sometimes like a hero going through an obstacle course. I guess the point is to make it look easy, but it’s a lot. It’s balance. Balance in these heels.”