Bridging the gulf between conceptual fashion and the mass market, H&M has tapped Rei Kawakubo to collaborate on a collection for holiday retailing. 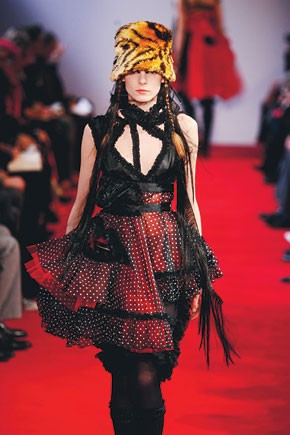 PARIS — Bridging the gulf between conceptual fashion and the mass market, H&M has tapped Rei Kawakubo to collaborate on a collection for holiday retailing.

“Mentally, I will not change my approach,” the maverick Japanese designer behind Comme des Garçons told WWD. “But since the object of the exercise is to join the forces of creativity with business, the collection will reflect this.”
The one time Comme des Garçons for H&M collection will be unveiled in Tokyo in early November as the Swedish fast-fashion giant continues its global advance and plants its first stores in Japan: a 10,000-square-foot unit in Tokyo’s Ginza district and a 16,000-square-foot location in hypertrendy Harajuku.

The firm also signed a lease for a 30,000-square-foot mega­store in the Shibuya area, which is slated to open in fall 2009, according to an H&M spokeswoman.

Details of the rollout to other countries have yet to be defined, but Kawakubo — acclaimed for a fearless, experimental approach to fashion — will design H&M clothes for women, men and children, as well as accessories and a unisex fragrance.
“I think it’s important to do something different,” said Margareta van den Bosch, H&M’s creative adviser and the force behind its popular annual designer collaborations. “We want to surprise our customer with things they don’t know about.”
Indeed, since only 20 percent of the Comme des Garçons’ business is generated outside of Japan, van den Bosch acknowledged that many of H&M’s customers might not be familiar with a label that has paraded everything from dresses sprouting humps and bumps to rough-hewn leather jackets resembling baseball gloves. For fall, Kawakubo showed frothy and sexy styles, including asymmetric brassieres, bum-baring bloomers and bulky coats with lip-shaped peekaboo cutouts.
Still, Europe’s second-largest clothing retailer (after Spain’s Inditex) is keen to introduce Kawakubo’s artistic and iconoclastic approach to design.

Van den Bosch, who was in Japan Thursday, said the collection is still being designed, but would reflect Kawakubo’s range from “very simple” to “very complicated” designs.

The co-branded Comme/H&M collection “will give a chance for a great many more people to know about — and hopefully wear — creative, strong and unordinary clothing,” said Kawakubo. “It will also spread awareness of the Comme des Garçons name to a much larger audience.”

This story first appeared in the April 4, 2008 issue of WWD. Subscribe Today.

For her part, Kawakubo said she has shopped at H&M stores and “was impressed with the variety and the quality.”
But given that fast-fashion chains often snatch ideas from European runways and wield staggering industrial clout, isn’t she sleeping with the enemy, so to speak?

“As an independent businesswoman, I have always been interested in the balance between creation, which is the core value of Comme des Garçons, and good business, which comes a close second,” she said. “Comme des Garçons with H&M is the epitome of this challenge.”

In spite of her single-minded approach to design, Kawakubo has a penchant for collaboration and has designed collections in tandem with Speedo, Azzedine Alaïa, Vivienne Westwood, Fred Perry and Peggy Moffitt, the keeper of Rudi Gernreich’s fashion legacy.

She also operates Dover Street Market, a six-story fashion emporium in London selling a hodgepodge of designer and streetwear brands.

H&M has sparked shopping frenzies for its annual designer collaborations with the likes of Roberto Cavalli, Stella McCartney, Viktor & Rolf and Karl Lagerfeld.

The company continues to flourish in a challenging market, posting a 28 percent jump in first-quarter profits on sales that advanced 18 percent to $3.1 billion, as reported. H&M plans to inaugurate 190 stores this year.