Kay Unger in her apartment.

For her next act, Kay Unger is amplifying the ageless power of art to connect and inspire people creatively.

This MO is not new terrain for the Kay Unger Design president and Parsons Board of Governors member. Entwining education with opportunity has been at the root of her career for decades. This month she is selling select pieces of art at Sotheby’s and some of the proceeds will support programs that support up-and-coming artists of color.

“I call it stage three of my wonderful career,” Unger said during an interview Wednesday.

Having enjoyed prized pieces from her family’s collection for more than a decade, the designer thought it was time to give someone else the opportunity to relish the art as she has. Another factor was dividing it between her two adult children: “You really can’t split it,” she explained.

Growing up, Unger’s family always supported young artists, a devotion that stemmed from a tragedy. “When I was four, my older brother, who was seven, drowned. My father set up the Steven David Epstein Memorial Art Foundation through the Boys Club of America [in 1950.] So I learned from the time that I was very little how we can change people’s lives with art,” Unger said. “Throughout my 50-year career, I always donated usually 10 percent from all my trunk shows to charities for cancer care or for the arts.”

“With all the work that I have done at Parsons [as a board member and through programming] and elsewhere, I’ve seen how it changes people’s lives,” Unger said.

After rigorous research, she determined that auction houses’ virtual art sales hadn’t dampened demand. “They have been enormously successful and there is also great demand. Many people were very successful while many people suffered [due to the pandemic],” the designer said.

Art is also a means of communication and connection between Unger and her six grandchildren who range in ages from two to 10. Via the Kay Unger Family Foundation, all of the Ungers have agreed to start collecting the works of emerging artists and supporting young people through different projects.

Through a partnership with Sotheby’s, Unger presented “Chez Kay,” a selection of her family’s seldom-seen art, earlier this month. Some of the proceeds from the sales will be used for her philanthropic efforts to help underserved youths with talent in the arts.

Unger joined Donna Karan Wednesday afternoon to meet with Parsons School of Design MFA of textiles students — many of whom are interested in sustainability — at Karan’s New York City store Urban Zen, which benefits her nonprofit. “By supporting and selling this art, you are making it sustainable. You are passing it on and helping,” Unger said. Wednesday night was also booked with Unger addressing Parsons Entrepreneur Academy about how to safeguard intellectual property.

Investing in the work of emerging and overlooked artists from diverse backgrounds is another priority for Unger. Parsons is another place where she champions diversity and inclusion through interdisciplinary learning. When English is a second language, many learn to communicate through art, Unger said. The Parsons Scholars program, which offers scholarships to high schoolers of color, is one of the recipients of her foundation’s donations.

Unger is a proven resource for recognizing young talent. She met Pyer Moss founder and designer Kerby Jean-Raymond when he was a 14-year-old student at the High School of Art and Design. Her assistant, who knew him and his family, connected the pair and he became her intern. At the time, she was helping to launch Marchesa, and Jean-Raymond pitched in. “On Saturdays, he would come to work. We would go to a diner downstairs and the more we ordered, the more he talked about what fashion should be like. He was selling sneakers downtown. This was 20 years ago and he had so many fabulous ideas. I said, ‘You know what? I don’t care if you are 14. Let’s work on a business plan.’”

Unger consults with Line in the Sand, a swimwear and water wear company that donates all of its profits to oceanographic research and cancer-related organizations. The designer met the company’s founder Lynne Fletcher O’Brien through a Parsons board member and started advising her two years ago. One note of pride is that production is done in factories that the Garment Center Coalition helped save from rezoning. For years, Unger has been an advocate for manufacturing in midtown Manhattan.

The designer also has a hand in organizing next month’s Parsons benefit, which will be held in person. Travis Scott, Gabriela Hearst, Angela Ahrendts and Jean-Raymond are a few of the talents who will be honored on June 15 at The Rooftop at Pier 17. 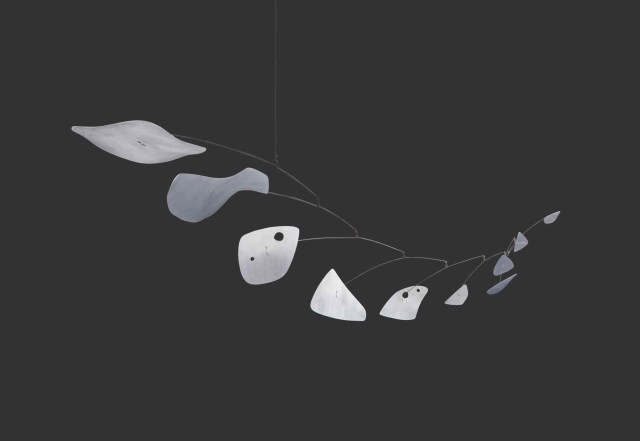 The Calder mobile that Sotheby’s has sold.  Courtesy Photo

Sotheby’s has already seen robust sales for some of the 12 or so pieces that Unger’s family is auctioning. Alexander Calder’s “Untitled, Light Reflecting Mobile,” 1948 and his “Le Buveur d’Eau,” 1967 were sold during previous sales. The first piece sold for $11.3 million and the latter sold for $378,000 — more than seven times its opening estimate. The Calder mobile previously belonged to Unger’s parents and at one time, it was owned by the esteemed architect Wallace K. Harrison, who orchestrated the design of Rockefeller Center, the United Nations Headquarters and Lincoln Center for the Performing Arts.

Another key piece that has been auctioned was the Francois-Xavier Lalanne “Mouton de Laine” that was designed circa 1985 and was executed in 1988, selling for $1.23 million. Pablo Picasso’s “Mousquetaire et courtisane,” 1968 went under the gavel for $378,000. Another work by Picasso, “Visage de femme (Alain Ramie 220)” from 1953, will be part of an online auction running June 17 through 24. Several other pieces made by Picasso that are part of Unger’s collection will also be part of that sale. 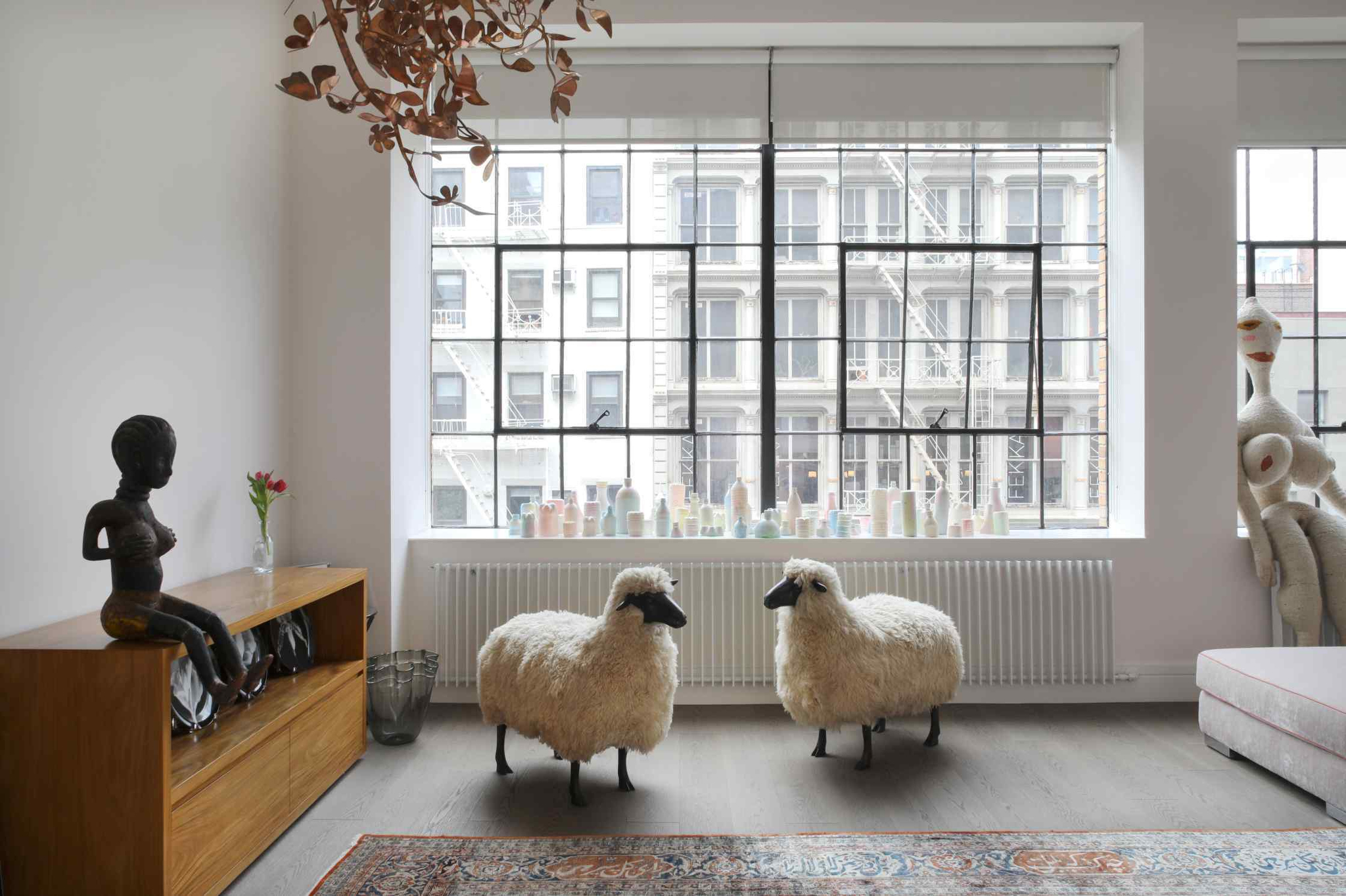 Letting go of the art wasn’t easy — especially the Calder mobile and two Francois-Xavier Lalanne sheep. The latter have been placed in every room of her home through the years. For the last couple of years, they were in her bedroom. “I do miss them. You say to count sheep, I slept with them,” she said. “I hope they will be happy if they become separated. They become part of your life. I taught all of my kids only to touch their faces or their feet. If you touch the wool, it disintegrates from the oils from your hands. Also, all my grandkids have grown up around art and they have learned how to care for it. They have never ruined a thing. If anybody ruins anything, it’s usually me.”