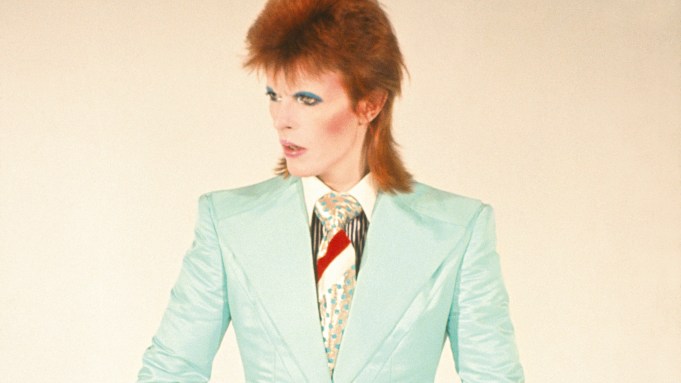 NEW YORK — David Bowie was more than just a rock legend — he was also a gentleman.

“They always say, don’t meet your heroes,” said designer Keanan Duffty. “But Bowie was a gentleman and very funny, and working with him definitely changed me.”

Duffty, a British-born designer and musician, collaborated with Bowie in 2007 on a line for Target that was inspired by the entertainer’s music and distinct fashion sense. Bowie’s gender-bending, glam-rock style was a major inspiration and reference to scores of fashion designers over the years, including Alexander McQueen, Hedi Slimane and Tommy Hilfiger. He died in January at the age of 69.

In a presentation to students and industry figures at the Fashion Institute of Technology’s Faces & Places in Fashion series, Duffty said Bowie died in “a creative burst of energy,” releasing a new album, working on an off-Broadway musical and an InstaMiniSeries on Instagram right before his death.

“Bowie is a tremendous creative figure,” he said, “and, for me, a mystical figure.”

Duffty ran through the various stages of Bowie’s fashion life, starting with the Mod years, when he channeled the youth culture in London as he was starting out in his career. He then moved into the Hippie years, where he first stood out with his androgynous outfits, one of the most famous being the famous floral “man dress” made by Mr. Fish in London in 1971.

From there, Bowie headed into his “science fiction outer space rock star” era when he released the Ziggy Stardust album, dyed his spiky hair red and painted a lightning bolt across his face, Duffty said.

“This was the dawn of glam rock and a seminal fashion moment,” Duffty said. “This is where he went from following others to taking the lead — not just in fashion, but in hair and makeup, too.”

It’s also the time when he worked with Japanese designer Kansai Yamamoto, who created avant-garde kimono-style outfits for the singer.

As his fame grew, Bowie moved to Berlin “and started dressing like a normal person,” Duffty said. This was the era of “The Man Who Fell to Earth,” the science fiction drama film, when Bowie opted for “stark and more sophisticated clothes. He embraced modernism and looked to the future…as an elder statesman of rock.”

By the time Duffty approached Bowie’s team about the Target collaboration, the rock star was leading a more private life. At the first meeting, the designer said he was expecting to see “a space alien,” but instead, met a man in Tommy Hilfiger chinos, suede boots by Roots and an ill-fitting sweatshirt who admitted he “wasn’t interested in fashion. But I told him I wanted to create a collection based on his fashion legacy.” Bowie agreed to cooperate although by this time he was a “wealthy global superstar” who didn’t need the publicity.

After Duffty had sketched out his ideas for the line, he brought Bowie’s albums to Target headquarters — the singer declined to make the trip — to show the executives the “rich tapestry” of his looks that illustrated the “evolution of what happened in fashion” over the years. And the Target team was all in.

Duffty related one anecdote about Bowie’s famous Moonage Daydream print that looked like a “circuit board” and was a favorite of the singer, who used it on a jumpsuit during his Ziggy Stardust years. Target didn’t buy that print, which Duffty had put on a T-shirt, but Bowie was insistent, saying, “They can’t take that out,” Duffty recalled. The retailer agreed to reconsider and add the shirt. “And the entire line sold out, except for the Moonage Daydream T-shirt,” Duffy said with a laugh. “You can find it on eBay for $5 now.

“The moral of the story is that a creative artist is not always the best judge of commercialism.”

While Duffty is obviously a fan, he said he’s found most people either love or hate Bowie — there’s no middle ground. “If you love him, you’ll be a fan for life. If you hate him, you can’t get over the mullet, the red hair and the one-legged jumpsuit,” he said.