Premium denim vendors have found another way to maintain their edge through exclusive partnerships with retailers. 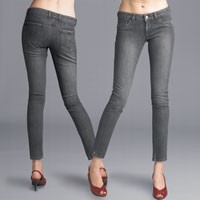 NEW YORK — Premium denim vendors have found another way to maintain their edge through exclusive partnerships with retailers.

A rising number of denim brands are teaming up with retailers to offer exclusive styles, washes or embellishments. In this two-way relationship, everyone — from the brand to the retailer to the customer — gets something they want.

Retailers and vendors agree that the key to this successful partnership is communication. Consumers communicate directly to retailers expressing their likes or dislikes, or perhaps what they’re not finding on the shelves. The retailer then communicates directly with the denim brand manager who responds with an exclusive piece of merchandise made solely for that department store or specialty boutique’s customer.

Stacey Pecor, owner of five Olive and Bette’s boutiques here, said it’s all about the relationship a store owner has with a particular vendor. Pecor carries five or six premium denim brands in her boutiques, among them Serfontaine, Paige Premium and AG. However, it’s through her relationship with James Cured by Seun that she offers exclusive denim styles. This spring, the Los Angeles-based denim brand has created a denim shorts and skirt style to be sold only at Pecor’s boutiques.

So how often does Pecor communicate with her representative at James Cured by Seun?

“She calls me every week,” Pecor said.

Due to the proliferation of denim brands and denim-only specialty stores, premium denim brands are readily available at a number of stores worldwide, not to mention the Internet. As a store owner, Pecor feels she must offer the customer added-value to score an advantage.

“[Our rep] is basically merchandising the line through my store,” said Pecor. “She’s being proactive.”

Pecor said roughly 10 to 12 percent of the merchandise she offers in her boutiques are “specials” that are the result of a collaboration with various vendors. Typically, exclusive pieces are sold on a season-to-season basis and are adjusted as the needs of the consumer change.

Since brand recognition is important to her customer, Pecor said she often includes both the brand and her store name on the inside label of the merchandise.

When Diesel teamed up with Jeffrey New York to create the Lowky J slim-fitting style in a dark blue and black wash that retails for $225, they announced their collaboration on a the hangtag, which reads “Diesel for Jeffrey.”

“For us, it gives us a cool niche to play in other than the big department stores,” said Robert McCaffery, vice president of sales for Diesel. “Jeffrey has a whole different customer.”

McCaffery said the Jeffrey New York customer is typically a hip, fashion-savvy Manhattanite, whereas the freestanding Diesel stores tend to attract more tourists. Bigger department stores, such as Bloomingdale’s, have worked with Diesel in the past on collaborations, but typically the collaboration involves a particular wash or back pocket instead of an exclusive body.

“Sometimes, they prefer something more commercial,” McCaffery said of the larger department stores.

The Lowky J style, however, hit shelves at Jeffrey in early March and already has been reordered. McCaffery said Jeffrey has had input on every aspect of the jeans, from the cut to the wash to the labeling.

“This could go on indefinitely,” McCaffery said of the collaboration, which includes a men’s style, as well. “It’s got legs. It gives [the retailer] a handle to lure the consumers in.”

A new style is already in the works for fall and McCaffery said the design will be inspired by a “new style coming out of Italy.”

“It’s more about the high waist,” he added.

Jeanne Sottile, vice president of contemporary sportswear at Bloomingdale’s, said the store frequently partners with premium denim brands, such as Chip & Pepper and Seven For All Mankind, to create customized pieces for its customer.

“[Denim vendors] are very willing and receptive to trying new things to help differentiate their brand,” Sottile said. “That’s the beauty of this market. It’s an important aspect of the business.”

Sottile said these pieces give the customer another reason to buy. At Bloomingdale’s 59th Street flagship, for instance, the denim department occupies 4,000 square feet on the second floor. By creating key pieces exclusive to Bloomingdale’s, vendors are differentiating themselves from the other brands and therefore creating an advantage.

“The denim brands know it’s an important part of the business and they do it for partnership reasons,” Sottile said. “They are a creative lot of people and I think they enjoy it. It’s not drudgery. They’re excited to do it.”

Like Pecor, Sottile said Bloomingdale’s speaks to some of its denim vendors on a daily basis.

Because collaborations also are used as a customer service technique to better service the customer, Sottile said sales associates are well educated on the brands, the collaborations and what differentiates one wash or back-pocket treatment from another. Bloomingdale’s does not include separate hangtags or inside labels announcing the partnership. Instead, it relies on the sales associate to inform the customer.

“If they come in and shop the line and have a need that we didn’t merchandise in the line, we might take a style and combine an existing fit or perhaps offer a new wash,” she said.

Seven does exclusives with other retailers, but exclusive packaging is only done through Barneys.

Suzy Radcliffe, who launched Radcliffe Denim in April 2005 in London, took the exclusive trend one step further and decided to launch her London-based denim collection exclusively in the U.S. in five Barneys New York locations last October and will launch exclusively in Japan through Isetan this July.

Radcliffe said focusing on one retailer made the most sense for her brand, which lacks a sales team in the U.S.

“We’re a very young business and we’re still ironing out any problems we might have,” she said. “It’s manageable for us to work with just one retailer.”

Barneys appealed to Radcliffe on many levels. She liked that the specialty store took on young, new designers who were producing fashion-forward collections. Plus, she liked the environment in which the merchandise hung.

“At other stores, I felt like my brand would get lost,” Radcliffe said.

In the U.K., however, Radcliffe Denim is available at Selfridges and Harrods, in addition to specialty boutiques.

When launching exclusively through one retailer, however, caution is important. Radcliffe is aware that limiting her collection to just one retailer can seriously impact sales. But she said her partnership with Barneys has been beneficial to her company.

Though she declined to provide an estimated wholesale projection for this year, she said: “We’re profitable. We’re in pretty good shape and I want to grow in a steady, sustainable way.

“I want the brand to be widely known, but we need to have a controlled distribution. I want to supply more stores, but in a controlled way. Building a brand is a very long-term thing and where people find the jeans is as important as the press it receives in perception of the brand. It’s entirely press-driven and word of mouth.”