The "Twilight" star has signed on to be a spokesmodel for Los Angeles-based premium denim label. 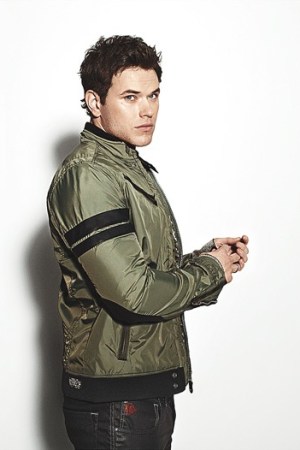 After sporting nothing but his chiseled abs and tighty whities in Calvin Klein underwear ads, “Twilight” star Kellan Lutz is ready to pull on a pair of jeans.

Lutz, who rose to fame portraying the vampire Emmett Cullen in the blockbuster “Twilight” films and generated much buzz last year as the latest celebrity poster boy for Calvin Klein, has signed on as the first star spokesmodel for Los Angeles-based premium denim label Dylan George. Dressing up from underwear to jeans might be the next logical step for the 25-year-old actor, who will front Dylan George’s new men’s line launching this fall. Yet, Lutz is also expanding his repertoire by trying his hand at design in a collaboration with Dylan George’s founder, Daniel Guez.

Guez, whose previous foray into celebrity collaborations was launching William Rast with Justin Timberlake and Trace Ayala six years ago, is partnering with Lutz on a new collection of men’s T-shirts, cashmere knits and pants under a subbrand called Abbot & Main by Dylan George. Named after a street intersection in Venice, Calif., near Lutz’s home, the collection of 25 pieces will make its debut this fall with retail prices running from $48 for a basic T, to $148 for trousers cut out of linen, canvas, brushed twill and wool blends, to $248 for cashmere hoodies. Dylan George will unveil the new line, along with its men’s collection, at the Project Trade Show in Las Vegas, part of MAGIC Marketplace.

“How cool will that be to create my own line?” Lutz pondered in a Los Angeles photo studio on a recent Saturday, when he had a four-day break from filming the last two films in the “Twilight” series in Louisiana. “I grew up wanting to be an inventor. I went to school for chemical engineering. I love to create. I’ve always wanted to get into fashion. I’ve always liked drawing, not Space Age stuff but high fashion.”

A fan of Diesel and John Varvatos, Lutz serves as the inspiration for the snug Henleys, chest-baring V-neck tops and vests for Abbot & Main. He is drawn to a neutral palette of navy, gray, black and olive green, one which he also plans to integrate in Abbot & Main, along with a deep red that reminds him of sunsets during his childhood in Arizona.

Aware that his shoulders and chest are the best assets on his muscular 6-foot, 1-inch build, the former high-school quarterback prefers V-necks and shirts with rolled-up sleeves. On the other hand, slim leather jackets feel too constricting, while skinny jeans afford him the unflattering silhouette of a carrot. He doesn’t like overly embellished back pockets or baggy jeans because, he explained, “girls don’t like sagging jeans.”

A pair of slim straight jeans by Dylan George in a charcoal gray resin coating is Lutz’s favorite pair. “I like the ones that can be dress pants,” he said. “I don’t like to be loud. I like fitting in and not drawing attention. Simplicity is key.”

Plus, details such as the contour yoke and similarly arced back pockets on the Dylan George jeans help accentuate Lutz’s backside. “It doesn’t need to be supertight around the butt,” he said. “Complement your butt instead of hiding it.”

It took a few years for Lutz to form his own set of fashion rules.

“In L.A., you’re always being judged by what you wear,” he said. “I pretty much knew L.A. was the denim capital of the world. Some of the trends I tried, I didn’t like. They were supertight. People said, ‘You’re important; you have to look a certain way in $300 and $400 jeans.’ This was when I learned that I need to dress comfortably.”

Mugging for the camera isn’t new for Lutz. He started modeling at age 14 for the department store Dillard’s while still in high school in Arizona. He walked the runways in New York, Milan, Paris and London until he quit under pressure that he wasn’t skinny enough. His all-American looks helped him snag some high-profile denim campaigns with Levi’s and Abercrombie & Fitch. When Lutz made the link between Guez and William Rast, he felt more confident to delve into his first fashion design collaboration.

“I loved Justin Timberlake’s William Rast,” he says. “I grew up dancing to Justin Timberlake in church. I thought it’d be fun to do something like that. It’s amazing [Guez and I] have the same taste. The style is the same as mine. We have fun. We have a lot of chemistry.”

As the rapport between designer and muse is important, so is the connection between the celebrity spokesmodel and Dylan George’s 18- to 45-year-old customers.

“A guy needs to relate to the person [in the ads],” Guez said. “Kellan’s a guy’s guy. Guys want to be friends with him and girls want to be with him.”

With Lutz, who has signed an 18-month deal with Dylan George, Guez is reentering the men’s market this fall after a three-year absence. Guez offered men’s jeans when he introduced the brand in 2008, after leaving William Rast. He closed Dylan George’s men’s division altogether after one season to focus on the growing women’s business, which is now carried by national retailers including Nordstrom and Piperlime.com, in addition to specialty stores such as E Street Denim in Highland Park, Ill., and Madison in Los Angeles.

Guez expects not only to place his revamped men’s line, which will retail between $178 and $228, within his current retail network that sells the women’s denim, but also to sign new accounts like Bloomingdale’s, which will start selling Dylan George’s men’s and women’s styles for fall. He declined to provide sales estimates for the men’s business and Abbot & Main, however. He says international distributors for Dylan George in Canada, the U.K., Greece, Australia and Germany have already committed to picking up Abbot & Main.

“I love that because I’m going to all those places [to promote ‘Twilight’],” Lutz said.

Synergy is a crucial component for Dylan George’s marketing strategy. Feeding on the fan frenzy for the “Twilight” films, which have grossed more than $1.72 billion worldwide at the box office, Guez plans to place the new Dylan George ads featuring Lutz in glossy magazines that also will write about the actor’s role in the upcoming fourth film of the five-part franchise.

Besides billboards on L.A.’s Sunset Strip and in New York’s Times Square, the ads also will be splashed on online gossip pages such as JustJared.com and PerezHilton.com, denim blogs and social media sites including Twitter and Facebook. Behind-the-scenes video also will be posted on Dylan George’s Web site.

Dylan George plans to unleash Lutz’s ads in August, ahead of the Nov. 18 release of “The Twilight Saga: Breaking Dawn — Part 1.” Guez also aims to capitalize on publicity for Lutz’s other fall blockbuster; “Immortals,” a $115 million action movie in which Lutz portrays Greek god Poseidon alongside Mickey Rourke, Stephen Dorff and Freida Pinto, will hit theaters a week before “Twilight.”

“I feel that [Lutz is] on the same road as Mark Wahlberg,” Guez said, referring to another former Calvin Klein underwear model who’s since jumped onto Hollywood’s A-list.

No matter what the comparisons are, Lutz acknowledged that he should be himself, comfortable in his own skin — and clothes.

“It’s your face in front of the camera,” he said. “You have to look confident and feel confident. At the end of the day, it’s about comfort. You have to be in clothes all day.