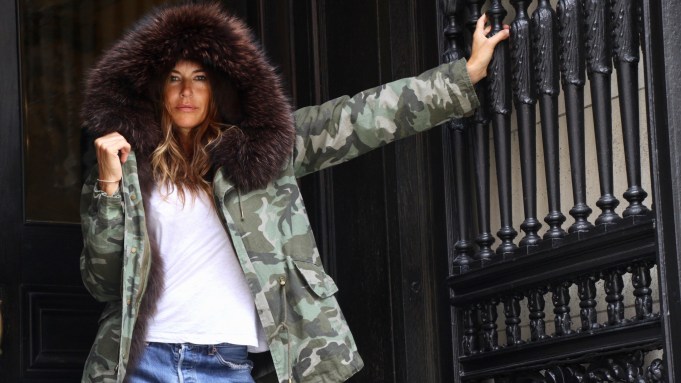 Kelly Killoren Bensimon, who’s had a busy multihyphenate career as an author, socialite, model, editor, cast member of “The Real Housewives of New York City,” and current real estate agent is getting into the luxury fashion game.

She is designing a capsule in collaboration with Pologeorgis, the New York-based luxury furrier and outerwear firm called En Ville. The capsule runs the gamut from a peacoat, fur-lined luxurious raincoat and evening shrugs to an animal-printed fur coat and embellished footwear.

En Ville will be introduced Aug. 4 at What Goes Around Comes Around in East Hampton and then be sold on Pologeorgis’ web site and Bensimon’s Instagram, beginning in September.

Accessories in the lineup include black shearling-lined slippers with brown fox trim at the top for $425 and leather sandal straps with cork sole lined in mink fur for $1,000. The home pieces are Rex rabbit pillows, $300, and a Rex rabbit-fur throw for $2,000, both offered in white, cream, blush and gray.

Bensimon said she’s never designed an outerwear collection before, and the line grew out of mink sandals she designed with Pologeorgis for her daughter’s high school fund-raiser. “Before I even got to the fair, I put them on my Instagram and sold three pairs in 15 minutes,” she said. That led to the idea for the capsule, inspired by her own lifestyle.

“I have a very unusual life. Sometimes I’m very dressed, and most of the time I’m very, very casual and I use outerwear as my signature piece to create a look,” said Bensimon. “Pologeorgis was a perfect match, their design and their quality is very high.” She said she was wearing some of their jackets to test the market and every time she wore something by Pologeorgis and put it on her Instagram, it got a tremendous amount of “likes.” “I have a very unique fan base that ranges from teenagers to women in their 50s,” said the former “Real Housewives of New York City” cast member, who exited from that show in 2011 after three seasons.

She’s offering about 12 styles in the capsule.

Although it’s not vintage, Bensimon said she decided to introduce it at What Goes Around Comes Around “because I fell in love with the store” having been there recently for a vintage jeans launch. “The quality of the handbags is so high. I love the Hamptons, and my friends are out there, and wanted to do something with my friends celebrating something I’m excited about,” she said. Customers can preorder the line and buy a few things there that day. She will be there Saturday, and the line is being shown the whole weekend.

In addition to selling on the Pologeorgis web site, Bensimon said she’s excited about selling on Instagram. “I saw such a huge jump in sales last January [when she sold the sandals online]. I was able to sell to Canada, Australia, Germany and England,” said Bensimon, noting she sold some 40 pairs.

Among her various activities, Bensimon also works with Warburg Realty, selling real estate in New York and the Hamptons. She films and uses Instagram Live to show what apartments, buildings and homes looks like in real time. “It’s a different kind of direct-to-consumer,” she said.

Pologeorgis, founded in 1960, is based in New York and has collaborated with such labels as Michael Kors, Derek Lam, Zac Posen, Zandra Rhodes and most recently, Monse. Pologeorgis sells such stores as Neiman Marcus, Saks Fifth Avenue and Bergdorf Goodman, as well as Moda Operandi.