Jenner photographed herself at home, on her computer, and stars in a CGI video created by Riccardo Tisci, Nick Knight, Peter Saville and Katy England for the summer TB monogram campaign.

LONDON — Riccardo Tisci has reassembled his summer dream team — plus Kendall Jenner — for a new TB monogram campaign that will land today on Burberry’s platforms.

Tisci worked with Nick Knight, Peter Saville and Katy England for the second year in a row, although this time the star of the summer campaign is Jenner, rather than Gigi Hadid.

Jenner, clad in a bodysuit plastered with an oversize TB print, photographed herself, at home, on her computer, and also features in a CGI video that was shot by Knight; art directed by Saville, and styled by England. The video has a spare, modernist feel, and a whiff of Helmut Newton to it. 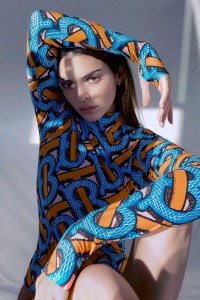 “Riccardo wanted to collaborate closely with me to bring this collection to life in a number of ways. He encouraged me to interpret the campaign myself, which was such an exciting opportunity. I loved being able to add my own personal touch,” Jenner said.

She added that Tisci and the team then pushed the campaign “into this dream-like digital world as I transformed into CGI versions of myself, embodying the four characters. The collection and campaign are also completely my vibe — that relaxed summer spirit really resonates with me as a California girl.”

The inspiration is similar to last year’s campaign, which saw Hadid take on a number of personas, transforming into a boy, a gentleman, a girl and a lady, reflecting Tisci’s aim to dress clients across different genders and generations.

The TB logo has been magnified and remade in dark beige, azure, graphite, cobalt and orange, and splashed across hoodies, scarves, espadrilles and sneakers. Burberry worked e-canvas, a material made using renewable resources, into small bags, totes and pouches.

Burberry said the collection will be available to purchase in selected brand stores, globally and online, from July 1. It will also be sold through a global partnership with Farfetch that is set to launch on July 8.

Farfetch will be selling the full summer capsule collection, excluding the surfboard, on its global platforms, and is the only digital wholesale partner to be selling the capsule exclusively in the EMEIA region. Burberry will also be hosting its new B Surf multiplayer game on Farfetch.com.

In 2018, the brand inked a deal with the online fashion group that made its entire global inventory available through Farfetch’s e-commerce platform. The deal radically expanded Burberry’s distribution, giving it access to more than 150 countries.

Tisci said that, for him, the summer collection “is all about celebrating the strength of the duality of feminine and masculine energy, blurring the lines and exploring this notion of youthful expression.”

He added that he was thinking about day dreaming and reveries “that I associate with summer, that time when you are drifting between reality and fantasy, and I wanted to portray this through the juxtaposition of the imagery.”

Saville said he and his fellow creators “were able to see the work evolve digitally in front of our eyes in an entirely new way, which was a very different process to shooting in a photo studio, as the possibilities are so endless.”

Tisci created the interlocking TB motif, named for company founder Thomas Burberry, with Saville and unveiled it in 2018.

Knight pointed out that, due to lockdown, the campaign was created “all from our homes,” while England said she found ways to cope with lockdown restrictions and the fact that she couldn’t physically dress Jenner.

“I styled part of it on paper and the other part at home, with the help of my sons. I have been amazed seeing what the technology can do and it’s been interesting adapting to a totally new approach,” she said.